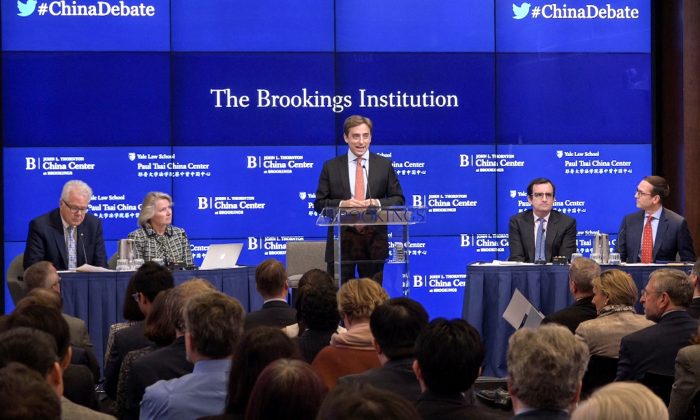 The Great Debate: Are the United States and China Incompatible?

WASHINGTON—Observers of U.S.-China relations could be forgiven for experiencing a little vertigo.

Relations between the two countries have been changing rapidly and drastically. To help come to terms with the new situation, the Brookings Institution and Yale University staged a debate on Oct. 30.

At issue: Are U.S. and Chinese long-term interests fundamentally incompatible?”

Before the 90-minute debate, 35 percent of some 200 audience members thought that U.S. and Chinese long-term interests are fundamentally incompatible, 50 percent voted “no,” while 15 percent were undecided.

After the debate, four-fifths of the undecided, or 12 percent of the audience, came down on the “yes” position: the long-term interests are incompatible.

Arguing for the “yes” team, Evan Medeiros, the Penner Family chair in Asian Studies at Georgetown University, said that because China’s behavior over the years had changed and evolved, the assumptions that drove U.S.-China policy needed to change, too.

Medeiros said that, according to Chinese regime’s official documents, China has three core interests: maintenance of the Chinese Communist Party (CCP)’s role and social stability; protection of territory and complete sovereignty and unification; and economic and social development.

Because of these goals, “U.S. and Chinese interests are incompatible and becoming more so,” Medeiros said. “The differences of our political systems are an enduring source of distrust, and Chinese efforts to maintain social control at home, especially by using technology, will only draw a starker contrast with the United States.

“The U.S. political system is seen by China inherently as a threat. Both U.S. media and NGOs are constantly criticizing China; and there is no American political leader that will ever confirm the legitimacy of the leader of the Communist Party, as the Chinese desire.”

Regarding sovereignty and territory, the United States and China will continue to disagree about Taiwan and China’s various territory claims, Medeiros said.

Regarding economic development, “The practical reality is, the policies that China is pursuing are ones that are deeply inimical with U.S. interests.”

Medeiros said the CCP is denying basic rights to ethnic and religious minorities, while clamping down on the universal rights of people in China.

“These behaviors will never be accepted by the United States, and the differences will only become a greater source of concern,” he said.

Susan Thornton, senior fellow at the Paul Tsai China Center at Yale Law School, argued for the “no” team, that while there are many incompatible issues between the United States and China, “We have many interests in common with China.”

Thomas Wright, senior fellow of foreign policy at the Brookings Institution, responded for the “yes” team that it’s meaningless to see only what’s in common between two countries, since, at one time, the United States and Soviet Union also had many common goals.

“There is an increasingly ideological element to the competition,” Wright said. “And that is natural, that is core. China worries that if the U.S.-led international order succeeds globally, it will be bad news for its regime.”

“And if China succeeds in making the world safer for totalitarianism, that will be bad news for our liberal international order,” Wright said.

Wright said that focusing on areas of cooperation and minimizing the areas of competition is very risky, because that would allow vulnerabilities that can’t be managed in the future to occur, especially on the technology side, such as artificial intelligence.

While the United States might have won the technological battles in the past, that might not continue in the future.

“We would say that matters because we should worry about who wins,” Wright said. “It does actually make a fundamental difference.”