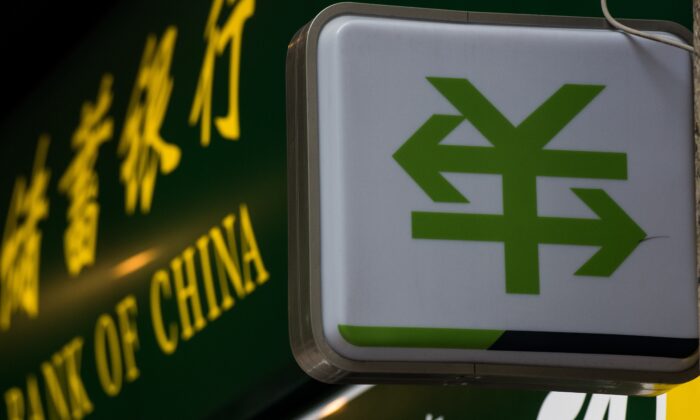 A Chinese yuan currency sign with two arrows is pictured outside a bank branch of the People’s Bank of China in Shanghai on Aug. 13, 2015. (Johannes Eisele/AFP via Getty Images)
Thinking About China

China’s collapsing currency is the latest in a series of economic decline symptoms that the Chinese Communist Party (CCP) leadership is scrambling to resolve, but so far, with little success.

The reasons for the yuan’s fall and Beijing’s failure are as predictable as they are destructive.

A major cause of the falling value of the yuan can be traced to the CCP’s zero-tolerance response to continuous outbreaks of the CCP virus across China. Beijing’s total lockdown policy for even a small number of cases in city after city over the past two-and-a-half years has severely interrupted export manufacturing activity.

That has not only caused a slowdown in manufacturing exports in China, but also in domestic demand and consumption. China’s consumer and manufacturers’ productivity for this past July fell well below expectations. Plus, the July growth rates for both are lower than those of June.

With millions of workers laid off during these seemingly endless lockdowns, consumer income and sentiment have both turned negative.

But falling export income, a manufacturing slowdown, and shrinking consumer demand are not the only negative consequences. Another factor is the collapse of the real estate development sector, which makes up about 29 percent of China’s GDP. It’s also a huge negative for consumer well-being and sentiment. Investments in real estate developments are a major part of individual retirement portfolios throughout China.

A study by Peterson Institute for International Economics (PIIE) states: “Nearly 60 percent of the total assets owned by urban Chinese households is property. That share is even higher for lower-income households. As a result, a sharp property price decline could trigger social unrest, something the Chinese government would want to avoid at all costs.”

Domestic investors’ response is unprecedented. Millions of owners have stopped or are threatening to stop paying the mortgages on either uncompleted or deeply devalued real estate development investments. This boycott could impact 200 projects in 80 cities and pose deleterious consequences for the financial sector.

But while incomes are falling in China, inflation is rising. In short, China’s consumers are getting cut by the double-edged sword of lower incomes and higher prices. Add in millions of angry real estate investors, and a potential consequence is growing domestic unrest.

Global investors are selling China’s currency and exiting yuan-denominated assets such as stocks and bonds. They’re also selling assets in emerging nations heavily dependent upon China. Their fears are reasonable. Continued shutdowns in China are disrupting supply chains in other emerging nations. Its economic malaise is expected to spread to other nations around the world, leading to other currency devaluations.

Per Hammarlund, the chief emerging markets strategist at Skandinaviska Enskilda Banken AB, said recently: “With the yuan set to weaken further, other emerging markets will face downward pressure on their currencies. The impact will be felt the most by nations which compete directly with China on exports.”

It’s that chain reaction that could trigger more capital flight into U.S. dollars, not because the U.S. economy is so strong, but because others are relatively much worse off. As Karl Schamotta, chief market strategist at Corpay, in an article from the Financial Times, noted, “We shouldn’t see as much outperformance in the dollar, unless there is a big safe-haven move.”

China’s policymakers at the People’s Bank of China (PBOC) are trying to staunch or even reverse the yuan’s depreciation with differing tactics. After the yuan’s current slide to a two-year low, depreciating against the dollar by 8 percent year to date, the PBOC declared that starting on Sept. 15, it would cut its foreign exchange reserve requirement ratio (RRR) to 6 percent from 8 percent.

The PBOC said the reduction was intended to improve “financial institutions’ ability to use foreign exchange capital.” But how effective the move will be remains to be seen. Bruce Pang, chief economist at Jones Lang Lasalle, said the announcement “could alleviate the pressure of a fast yuan depreciation.”

Avoiding a rapid devaluation may be the most realistic outcome Beijing can hope for. At some point, however, instead of trying to maintain a fixed rate, the CCP could let the yuan float. But to do so would take control of the yuan out of the Party’s hands. Some view that as unlikely to happen, as the Party must be seen as in full control of China’s economy, and that includes its currency.

Other analysts, however, view the causes of the yuan’s depreciation as not just a function of policy, but rather, as structural in nature, which is probably the case. In that case, Beijing may have to let the yuan float since it cannot control the capital flight of global investors and its necessary overreliance on inefficient but politically loyal state-owned enterprises (SOEs) for growth.

Bloomberg’s Simon White agrees. “The forces causing the yuan to decline are structural, and there is a mounting likelihood that China may eventually drop the fixed-exchange rate regime altogether.”

The challenge to let the yuan float will be to do so gradually while putting the right political spin on doing so.

But by focusing stimulus on SOEs in the wake of continued lockdowns, Beijing has been essentially rewarding Party-owned enterprises at the expense of the consumer sector. As a result, China’s trade surplus has been up about $0.5 trillion since 2020.

It’s not an economically smart tradeoff. The gain in export revenue cannot make up for the loss in consumer demand, which is shrinking and remains below pre-COVID levels. Furthermore, consumer lending, which is a major driver of imports, is at a 13-year low.

With both inflation and unemployment on the rise—especially impacting the younger generation, along with a collapsing real estate sector—Beijing’s management of the economy is under threat.

Will China’s great currency collapse challenge the ability of the CCP to effectively manage the fallout of a failing economy?