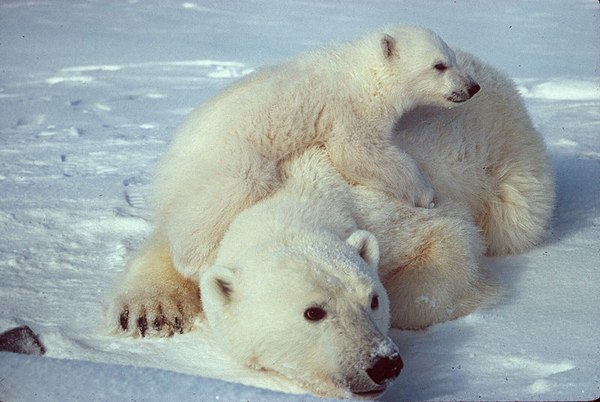 Polar bear and cub. Declining sea ice has made it more difficult for some polar bear populations to find enough food and rear cubs. Photo by: Scott Schliebe/USFWS.
Environment

Every winter, sea ice in the Arctic expands, providing vital habitat for birthing seals, hunting polar bears, and foraging walruses. But as the Arctic has warmed faster than any place on the planet—due climate change caused by burning fossil fuels—sea ice is not expanding as far as it once did.

According to the National Snow and Ice Data Center at the University of Colorado in Boulder, this year’s maximum extent of Arctic sea ice was the lowest yet recorded. On February 25th, sea ice hit 14.54 million square kilometers. This breaks the previous record low—set in 2011—by 130,000 square kilometers and is the lowest since satellite tracking began in 1979.

Still, researchers cautioned the sea ice could grow further if weather conditions permit, but they don’t believe this is likely.

The loss of Arctic sea ice—which is expected to vanish entirely in the summer during this century—is taking a toll on a myriad number of Arctic species as well as impacting local weather and people in the region.