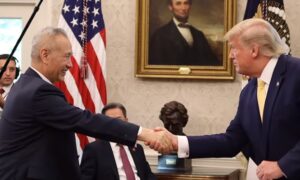 The bitter trade war between the Chinese regime and the United States goes far beyond tariffs on imports.

The Chinese regime has stolen American intellectual property for years, with the intent to empower itself and replace the United States. The regime uses spies, coercion, and theft to illegally obtained American jobs, ideas, and wealth.

An investigation into the theft set off the recent dispute. Now the administration is using its legal means to put an end to the exploitation.