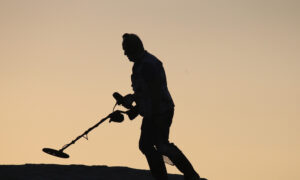 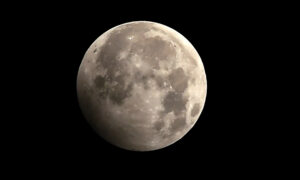 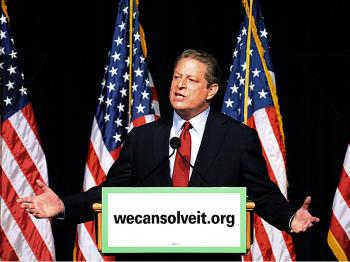 Former U.S. Vice President and Nobel Peace Prize winner Al Gore outlines his vision for the future of U.S. energy needs during a speech at the Daughters of the American Revolution Constitution Hall on July 17, 2008 in Washington, DC. (Tim Sloan/AFP/Getty Images)
Science

By Evan Mantyk
Print
Former vice president and high-profile environmentalist Al Gore challenged America to switch totally off fossil fuels in 10 years, during a speech on Monday in Washington, D.C.

Unlike his academy award-winning documentary An Inconvenient Truth, which relied primarily on evidence of climate change, Gore focused his speech on the economic and security necessity of pursuing a greener nation—leaving behind the discussion of whether global warming is man-made or not.

“Our economy is in terrible shape and getting worse, gasoline prices are increasing dramatically, and so are electricity rates. Jobs are being outsourced. Home mortgages are in trouble. Banks, automobile companies and other institutions we depend upon are under growing pressure,” said Gore. Kicking America’s fossil fuel addiction, he contends, will reduce energy costs and put jobs back in America.

Gore acknowledged that a challenge to stop using fossil fuels—primarily oil and coal—would not be achievable just a few years ago, but now there have been sharp cost reductions in solar, wind, and geothermal power. In the face of dramatically rising price increases for oil and coal, switching off fossil fuels makes economic sense not just environmental sense.

It also makes security sense, according to Gore.

“We're borrowing money from China to buy oil from the Persian Gulf to burn it in ways that destroy the planet. Every bit of that's got to change,” he said. “The answer is to end our reliance on carbon-based fuels.”

The exploding demand for oil, especially in places like China, is outpacing new discoveries of oil so much that prices are certain to continue climbing. Meanwhile, Gore believes that renewable sources could offer the equivalent of $1 per gallon of gasoline.

“…Many people doubted we could accomplish that goal. But 8 years and 2 months later, Neil Armstrong and Buzz Aldrin walked on the surface of the moon,” Gore said.

With his seemingly endless source of science trivia, Gore was optimistic that a challenge to switch America off fossil fuels in 10 years could also be achieved.

“Scientists have confirmed that enough solar energy falls on the surface of the earth every 40 minutes to meet 100 percent of the entire world's energy needs for a full year. Tapping just a small portion of this solar energy could provide all of the electricity America uses,” he said.

“And enough wind power blows through the Midwest corridor every day to also meet 100 percent of US electricity demand. Geothermal energy, similarly, is capable of providing enormous supplies of electricity for America.”