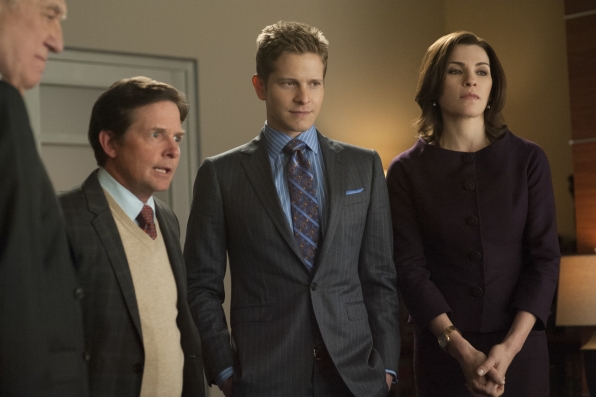 The Good Wife has been renewed for a season 6 by CBS.

The show continues to get strong ratings even after the shocking death of Will Gardner in the middle of season 5.

Very little plot- or character-wise has come out yet about the next season, although executive producer Robert King did reveal that romance between Alicia and Finn could be in the cards.

“A lot of what we do is watch the dailies and see what comes out. There is a lot of fun chemistry between Julianna [Margulies] and Matthew [Goode], but we can’t [address the potential for romance] until we react a little bit more to what’s being shot.”

Meanwhile, the cast has been in a good mood.

“It feels like we had this strange renaissance this season,” Julianna Margulies (Alicia Florrick) told the LA Times. She also said she understood why Josh Charles (Gardner) wanted to leave the show, as it “can be frustrating for an ensemble player when you’re on a show that is mainly about one character.”

But Gardner’s death re-energized the program. “As tragic as the loss of the Will Gardner character is,” said Margulies, “it has definitely fueled a new energy into the writing.”

As for the season 5 finale, “Weird Year” will feature an open feed from a camera is mistakenly left on after a teleconferenced deposition between the lawyers of Florrick/Agos and Lockhart/Gardner. It reveals a threat to the firm that Alicia and Cary “never saw coming,” according to the official description. The tension between the two will be ratcheted up a notch and trigger an “explosive scene.”

King said that at the end of the finale, viewers will be left with ”a real sense that a new chapter is starting and that “A lot is swinging on Alicia and Diane’s decisions.

Meanwhile, the fate of Lockhart/Gardner hangs in the balance as Louis Canning vies for a larger role and Alicia entrusts Zach’s high school graduation party to Jackie and Veronica.

King said that the events of the finale will catapult the show onto a “bigger battlefield” in the fall, including “more serialized storytelling.”

As for a premiere date, CBS hasn’t announced one. But based on the past seasons, it will be sometime in late September, probably September 28.

The network did announce that the show will stay in the 9 p.m. timeslot on Sundays. Two new shows will be on the Sunday night programming–Madam Secretary, a political drama that centers on the life of a female secretary of state, will air before The Good Wife at 8 p.m.; while CSI spinoff CSI: Cyber, which focuses on cyber attacks and hacking, will air at 10 p.m.

Most if not all of the primary cast members are expected to return for season 6.