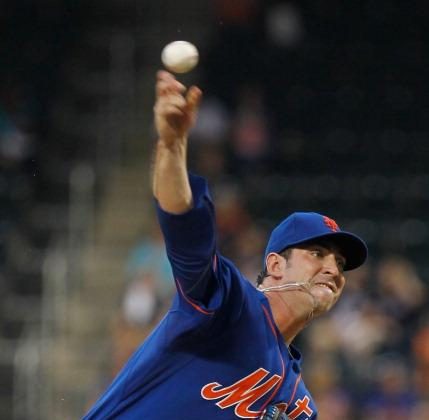 With a NL-best 147 strikeouts, New York Mets starting pitcher Matt Harvey is the most talked about pitcher in baseball. (Photo by Mike Stobe/Getty Images)
News

The Good and Bad of the NL East

In 162 games, all baseball teams will identify the things that are going right and the things that are going wrong. Some teams have few to celebrate and some have few to complain about. The Atlanta Braves have put some distance in the division but the Washington Nationals have a trio of pitchers that can’t be overlooked. Despite some struggling pitchers, the Philadelphia Phillies are right on the tails of the Nationals. The New York Mets are closer to last than first but an ace-caliber pitcher is certainly putting eyes on them. The rebuilding Miami Marlins are seeing the fruits of their farm and some other farms, develop, as they give their fans a preview of what their future looks like. Here is the good and bad of the five NL East teams.

(Statistics as of games on July 13 via baseballreference.com)

While Freddie Freeman has been a better overall hitter, hitting to a .308 batting average, his power numbers are slightly lower than his average. While his home run total isn’t Through 81 games up to the All-Star break, Freeman has contributed 61 RBI, which is good enough for eighth in the National League. This could be because of his .423 batting average with runners in scoring position. He’s a big reason why the Braves are doing well this season. If he can keep this up, they should be a presence in October.

Shoulder surgery delayed Brian McCann’s start to the season but he made up for lost time. McCann started his 2013 season in May and would hit 12 home runs with 32 RBI. His .291 average is third best of National League catchers. When Freddie Freeman was forced to miss the All-Star Game, McCann was a suitable and deserving fit.

Currently with a strained right adductor, B.J. Upton may be relieved that his batting average can’t dip any lower. With his batting average at a career-worst .177 and having already struck out 102 times, the 5-year, $75.25 million contract has been a bad signing for the Braves so far. In Upton’s career, he has been slightly better in the second half so when he returns from his injury, maybe he will turn it around and be a positive contributor like his brother Justin.

In 2011, Jonny Venters had a 1.84 ERA and Eric O’Flaherty had a 0.98 ERA. Both of these relievers are lost for the season with elbow surgery. With closer Craig Kimbrel, these three relievers were some of the most dominant pitchers and they were all on the same team. Pitchers like Luis Avilan (1.40 ERA) and Jordan Walden (2.35 ERA) have stepped up in their absence. The Braves could have one of the most dominant bullpens ever when their injured left-handers come back next season.

By the end of April, slugging outfielder Giancarlo Stanton would be heading for the disabled list with a hamstring injury. Just when everyone thought the Marlins would have even less offense than they were expected to have, Marcell Ozuna made an impact. The 22-year-old Ozuna is not Stanton; he won’t hit enormous home runs that fans at the water cooler will talk about. He is a good hitter though. He came out hitting .333 in May and despite slowing down over the next few months, he hit .352 with runners in scoring position. He only has three home runs but his 32 RBI ties for the team lead. The Marlins will need to find a way to keep this bat in their lineup.

Injuries may have set it all into motion, but Jose Fernandez was put on the Opening Day roster of the 2013 season and was given the opportunity to get his big league career started quickly. The 20-year-old Fernandez struck out eight in five innings of one-run baseball in his debut. He made the All-Star Game as the lone Miami Marlins representative with 103 strikeouts in 104.2 innings. There are indications that Fernandez will be limited to 140-150 innings. If he is, the Marlins future is bright with him atop the rotation.

Just points behind the New York Mets, statistically, the Marlins have the worst offense in the National League. The Marlins were not expected to produce much and with a number of rookies, they lived up to the expectations. At catcher, rookie Rob Brantly has just one home run with 18 RBI. Second baseman Derek Dietrich has hit nine home runs but he’s hitting just .218 so far. The future is not right now but the experience should only benefit these rookies to possibly put together a competitive team sooner than later.

Matt Harvey has taken the baseball world by storm. Whether it’s his nine innings of one-hit baseball with 12 strikeouts against the White Sox or the 13 strikeout outing against the Braves, the accolades and accomplishment keep piling up for the 24-year-old right-hander. He has struck out 147 over 130 innings to a 7-2 record. His record could be better with some run support for his great starts but the impact is made. He’s an ace and he may be the best pitcher in the game soon.

Named captain of the New York Mets this year, David Wright has led by example. With a .304 average, 13 home runs, 44 RBI and 15 stolen bases, David Wright is being an effective offensive force on all aspects of the game. Signed through at least 2020, David Wright is the face of the Mets franchise and if he produces like this regularly, the Mets can do bigger things very soon.

A part of the “bad” that comes with Shaun Marcum can include timing. The second loss of Marcum’s season came a couple days after his first loss. He had to pitch in the 14th inning and would be the last pitcher on the mound. Then, four losses later, Marcum would be brought in for another relief outing. This one went eight one-run innings but the one run was enough for him to lose. He would go nine decisions before his first win. He would be diagnosed with thoracic outlet syndrome and need shoulder surgery, ending his season at a 1-10 record.

Following a season that saw Ike Davis hit 32 home runs and 90 RBI, it’s hard to imagine he could be such a negative to the team. He did hit .227 in 2012 but in 2013, Ike Davis hit .165 going into the All-Star break. He only has five home runs and 18 RBI and at one point was demoted to AAA for a brief time. His recall in July did come with a three-hit game and an increase in his walks but he continued slumping. Once seen as a part of the franchise’s bigger picture, first baseman Josh Satin is putting Davis’ stability at first in doubt.

It took Domonic Brown four years but he has finally had his breakout season. Domonic Brown is third in the National League in home runs and RBI with 23 and 67. The baseball world took notice of Brown in May when he hit 12 home runs in 27 games. With the aging veterans around him declining, the 25-year-old outfielder has established himself as the primary offense in the lineup for the present and the future.

In 2012 and 2013, Cliff Lee has received almost the exact same average run support. So Cliff Lee had to step up his game and he did just that. With a 10-3 record, he also reduced his ERA from 3.16 to 2.86. Last season, his first half was 1-5 with a 3.98 ERA. Lee has stepped up with the struggles of Cole Hamels and the perplexing dip in effectiveness of Roy Halladay.

In 2012, Roy Halladay saw his highest ERA (4.49) since 2000. However, the 2013 season is even more alarming. At age 36, Roy Halladay spent most of the first half on the disabled list with shoulder surgery as he mulls over the 8.65 ERA he has. The numbers are alarming as he has a career high 2.4 HR/9 and 4.5 BB/9. His lower velocity worried many and at his age, there are many wondering if Halladay is not the once dominant pitcher that everyone got used to.

After being suspended for 25 games after testing positive for amphetamines to start the season, Carlos Ruiz was unable to produce like he did last year. This year, Ruiz has no home runs and six RBI with a .268 average in 40 games. If his 16 home runs and 68 RBI was a product of his amphetamines, the value of this 34-year-old catcher will decline dramatically come the offseason when he is a free agent.

When you think of great pitchers on the Nationals, you think of Stephen Strasburg or Gio Gonzalez. But right now, Jordan Zimmermann is the best pitcher on the staff. With a tie for National League in wins at 12, Zimmermann is also pitching to a 2.58 ERA. He isn’t a dominant pitcher (6.5 K/9) but he is effective with the fourth-best WHIP in the National League at 0.97. With Gonzalez and Strasburg, this trio could be a tandem that has them contending for championships for years to come.

A fantastic June brought the Nationals’ shortstop back to more respectable numbers. With nine home runs and 28 RBI in June, Ian Desmond has 15 home runs and 49 RBI going into the All-Star break. His average is slightly above his average and he continues to be an offensive presence at a usually defensive position. Along with Ryan Zimmerman and Bryce Harper, Ian Desmond is the core of the Nationals’ lineup that needs to produce more to make a push for the division title.

On a one-year deal, Dan Haren wasn’t a tremendous investment but he’s certainly not doing the Nationals any favors. At 4-10, Haren has surrendered a National League-leading 19 home runs. While the offense has done him no favors (2.62 run support on average), neither has he. Dan Haren has not responded well to his return to the National League. It will be interesting to see where he will go from here.

Many wondered if Danny Espinosa finally figured it out and was going to be one of the better second baseman in the National League. Unfortunately, the Nationals are wondering what they can do to fix the 26-year-old second baseman. In early June, the once productive second baseman was sent down to AAA with a .158 batting average, three home runs and 12 RBI. For the Nationals, prospect Anthony Rendon has done a great job filling in. If Rendon continues to produce, Espinosa may have lost a spot on the roster.