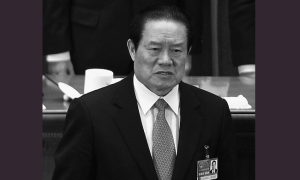 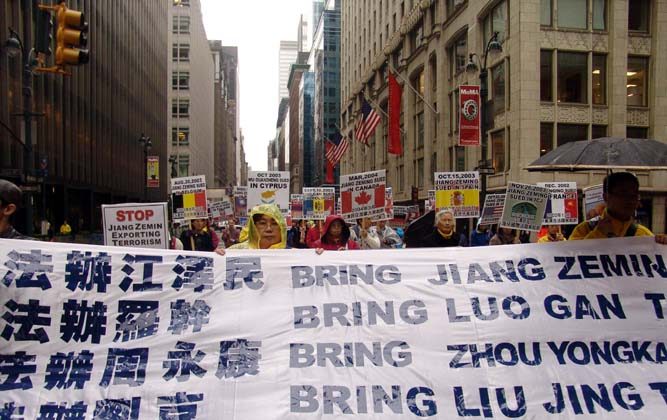 In a parade held in New York City, Falun Gong practitioners carry a banner calling for four Chinese regime officials to be brought to justice for their role in the persecution of the spiritual practice of Falun Gong, on Nov. 20, 2004. As the head of the Chinese regime’s security forces, Zhou played a leading role in driving forward the campaign against Falun Gong. (Minghui.org)
Chinese Regime in Crisis

The Goldilocks Solution: Why Zhou Yongkang Will Be Charged With Murder

That Zhou Yongkang is guilty was decided long ago. Now the Chinese Communist Party must decide what crime he is guilty of.

Recently one of the most powerful men in China, Zhou was put under control soon after the purge of his co-conspirator Bo Xilai in April 2012.

Zhou’s fate was the topic of endless speculation. His infrequent public appearances were much analyzed, and much ink was spilt wondering whether Communist Party head Xi Jinping would go so far as to arrest this former member of the Politburo Standing Committee. Party tradition conferred permanent immunity on those who once held this office.

Then the state-run Xinhua news agency made a brief announcement on July 29 that Zhou was under a formal investigation. The announcement in effect confirmed what insiders had long known—Zhou was under arrest. One doubts Zhou noticed any difference in his situation on July 30.

But now that the Party has finally admitted to locking Zhou up, what will it do with him?

Recent chatter on the Internet provides a clue. It has become routine when there is big news to launch trial balloons on the Web.

China’s large population of netizens is treated like a focus group. Their reactions are watched and gauged, and the next propaganda move plotted.

Rumors also serve as a teaser. The speculation about the new gossip whets appetites and creates an audience for the next big news—when the Party chooses the precise time and occasion to release it.

The rumors about Zhou on China’s Web are that he will be tried for the murder of his first wife.

This is not a new accusation. Epoch Times reported two years ago that Zhou murdered his wife.

Zhou’s first wife, Wang Shuhua, divorced him in 2000. Not long after the divorce, she was killed in a traffic accident. Not long after her death, Zhou married a beautiful, young CCTV hostess.

Wang Shuhua was killed when her car was struck from opposite sides by two other cars. The two drivers were both military police. One was sentenced to 15 years and the other to 20. However, after three to four years, each got out of jail and was promoted.

Epoch Times sources say Zhou arranged the murder. Zhou’s younger son certainly believes this. He has broken all relations with Zhou, not even letting him see his grandson.

Of course, whether Zhou is guilty of his wife’s murder is not the key consideration for the decision makers in Zhongnanhai, the Party leadership’s compound.

The Party faces a problem. If it accuses Zhou of too little, then he may quite improbably become an object of sympathy. If it accuses him of too much, the accusation rebounds on the Party, damaging an institution that already has precious little legitimacy in the eyes of the Chinese people.

Consider the case of Bo Xilai. The former Politburo member and Party head of mega-city Chongqing had a long list of crimes that he could have been arraigned for.

Most conspicuous among his wrongdoings from the standpoint of Zhongnanhai was the political crime of plotting to unseat current Party head Xi Jinping. That crime was the real reason he was arrested, purged, tried, and convicted, but it was never mentioned in the state-run press.

But Bo was guilty of even more serious crimes. With his wife Gu Kailai, he helped pioneer making money by taking the organs from Falun Gong practitioners and selling them for transplantation. Beyond that, Bo sold the bodies of dead practitioners to factories that preserved them with plastic and sold them to exhibitions and medical-supply houses.

Instead of being charged with these crimes, Bo was found guilty of bribery, corruption, and abuse of power. Moreover, the corruption he was charged with was a moderate amount, a mere fraction of the billions he is believed to have stolen.

Now, a year after his trial, one meets Chinese people who feel sorry for this former Maoist charmer. They say, “Everyone in the Party steals. Why was Bo Xilai singled out?”

The Party erred, then, in the battle for public opinion. It couldn’t be honest about Bo’s crimes, and now it can’t explain why he got a life sentence when so many crooked cadres are running free.

Zhongnanhai also can’t be honest about Zhou Yongkang’s crimes. Zhou not only plotted with Bo Xilai to bring down Xi Jinping, but also twice tried to assassinate Xi, as the Epoch Times has previously reported.

These are the crimes that Zhongnanhai can’t forgive. The Chinese people, though, if given the chance, would bring a different set of charges against Zhou Yongkang.

For 10 years, from 2002 to 2012, Zhou was the driving force behind former Party head Jiang Zemin’s persecution of the spiritual practice Falun Gong.

Zhou’s security forces were responsible for detaining hundreds of thousands of practitioners. Those detained were typically subjected to brainwashing and torture. Tens of thousands had their organs harvested, killing them.

After refining the techniques of repression in the persecution of Falun Gong practitioners, Zhou began applying those techniques to other parts of the population. Dissidents of all kinds suffered the extra-judicial detention and hellish treatment that had been reserved for Falun Gong.

With a budget greater than that of the armed forces, and with an armed police force numbering over a million, Zhou turned himself into an independent political power.

Under the name of “stability maintenance,” Zhou turned that power loose on the Chinese people. Farmers who protested having their land stolen by local officials, homeowners whose houses were demolished by well-connected developers, villagers who protested being poisoned by industrial pollution, towns that objected to being robbed by the officials put over them—these citizens found troops of police descend on them.

All the while, this former godfather of China’s monopolized oil industry raked in billions in corruption for himself and his family.

One can be sure that the coup and the assassination attempts, the crimes against humanity, and the terrorizing of China’s population will not even be mentioned when this nasty brute faces trial.

If these crimes are once admitted by the Chinese regime, the Chinese people will see the Chinese Communist Party as the real problem. Zhou’s crimes will be taken to be instances of a criminal system at work.

For the same reason, while Zhou will surely be charged with some corruption at his trial, no one will admit how much he really stole.

At the same time, Zhou must be punished. If he is allowed to slip responsibility for the coup and the assassination attempts, then chaos will reign. Party discipline will vanish. A return to warlordism will be around the corner.

This is where Zhou’s dead first wife will prove to be convenient. Murder is serious. No one can object to Zhou Yongkang getting a stiff sentence for taking a life. Like Goldilocks with her porridge, the murder charge is not too hot and not too cold. It is just right.

Zhongnanhai will make sure the cadres know the real reasons for Zhou’s punishment, and they will draw the right conclusions.

The Chinese people will have the satisfaction of seeing the powerful Zhou Yongkang brought down, without grand corruption or extraordinary crimes inciting rebellious thoughts.

The Party will escape blame, for the moment.