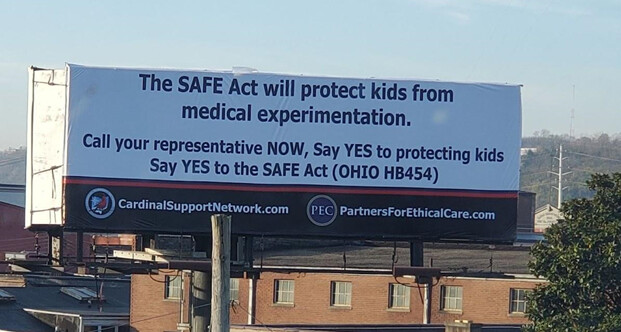 Gender fluid artist Mx. Alok Vaid-Menon (infamously known for his assertion that little girls are “kinky”) has announced that he’s moving into non-gender fashion design, “blending traditionally feminine shapes, such as bras and skirts, with clothing that defies gender categories.”

Here, we find ourselves again subjected to more meaningless absurdity, reported by the mainstream press, beginning with the fact he refers to himself as “Mx.,” not Mr., Ms., or Mrs. I have no words for such nonsense.

What really is at stake here is nothing short of the destruction of the lives of our young children, with Hollywood and the media glamorizing transition. It’s not the blurring of gender lines in fashion that’s the problem; it’s the make-believe world that Alok and his kin are demanding we validate under duress.

Vaid-Menon may think he’s harmless, but as a man who is literally paid to determine trends for the rest of society, he (sorry Alok, you’re a man) is contributing to the collapse of an ordered civil society. A society that recognizes things like maleness and femaleness and that biology is immutable and no matter what we call ourselves or how we dress, we have either a male or female body, apart from a few exceptions of medical aberration.

And our children are watching as the adults in the room are ripping apart reality and espousing nonsense, and the media, for the most part, is happy to report this false and dangerous narrative.

But as we witnessed in the Loudoun County, Virginia, battle over what children are being taught in public schools, and in the sexual assault of young girls by a male student because school policy allowed a male student to identify as female in order to gain access to the girls’ bathroom, parents aren’t having it.

Similar problems are brewing in Ohio, where seven gender clinics have set up shop.

Parents organized, mobilized, and exercised their right to decide what their children are being taught and their right to protect their children from harm while in the care of the school. This parental organization is growing in steam across the United States as it relates to the transgender narrative of being “born in the wrong body” or that you can “change sex.”

Parents are not only organizing to protect their children, but they are also involved in advocacy at the state legislative level.

Another effort to curb the dangerous trend is to educate the public by running billboards near gender clinics. Ohio is the second state, after California, to fund their billboard signs. California billboards faced so much backlash, their billboards were taken down, and the transactivists are targeting these campaigns as transphobic.

Most recently, Ohio state legislators introduced a bill, HB 454, known as the SAFE Act, an acronym for “Save Adolescents From Experimentation.” What should be seen as common-sense legislation, safeguarding young children from irreversible harm and damage is largely being met with a media blackout from reporters allegedly presenting fair and balanced reporting.

Equality Ohio states that HB 454 bans affirming health care and that this bill is an “extreme attack on affirming mental and medical care for LBGTQ+ youth.”

I spoke with Maria Polaris, co-founder and child advocate for the Cardinal Support Network (CSN), which doesn’t advocate for child or adolescent transition. It assists fellow Ohioan parents in finding a therapist who follows evidence-based medical care to help them and their minor children. CSN also partners with groups such as Partners for Ethical Care, in raising money to run billboards near gender clinics in Ohio.

Polaris tells me that one of the largest transgender clinics is in Cincinnati, and it boasts seeing over 2,000 patients, mostly young girls, as of 2019. Gender identity is trending in much the same way “emo” used to trend, catapulted onto the scenes by trendsetters such as Vaid-Menon, who make it cool for teen girls to hate their bodies.

And the consequences have been dire. It has been reported that parents who bring their children to these clinics for help are told the unfounded claim of likely suicide: “Would you rather have a dead daughter or a live son?” if they don’t allow their child to transition.

I’ve read the bill and encourage you to do so, too. Let me highlight just a few provisions in the SAFE Act that Equality Ohio deems to be an extreme attack:

Make no mistake, gender transition treatments and surgeries are irreversible, causing permanent harm to the child undergoing them.

Dr. Paul Hruz, a pediatric endocrinologist, says, the whole area of those who seek to detransition is “underappreciated as far as the actual number of individuals that have this experience of going forward with the affirmative approach, including hormones and surgery, to later recognize that it didn’t solve their problems.”

There is no rush to do any of these procedures, as gender dysphoria isn’t a terminal illness that needs immediate attention. And it’s not true that these youth are at higher risk of suicide if they’re not allowed to transition—if they are a suicide risk, they need counseling and perhaps the care of a psychiatrist. Finally, it’s a well-known fact that many of these youth with proper care will grow out of this confusion.

Polaris said, “The Ohio Safe Act must pass. We must protect children who are being transitioned to a sex they are not born to without any safeguards. Parents and kids are being bullied into experimental treatments. There is no long-term data to show improved outcomes or decreased suicide rates. The once-trusted children’s hospitals are gaslighting patients and these young adults into unnecessary drugs and surgeries.”

I couldn’t agree more. Medicine has lost its way, but thankfully for these brave parents, they will not sit back and watch as their children are butchered in the name of “treatment.”