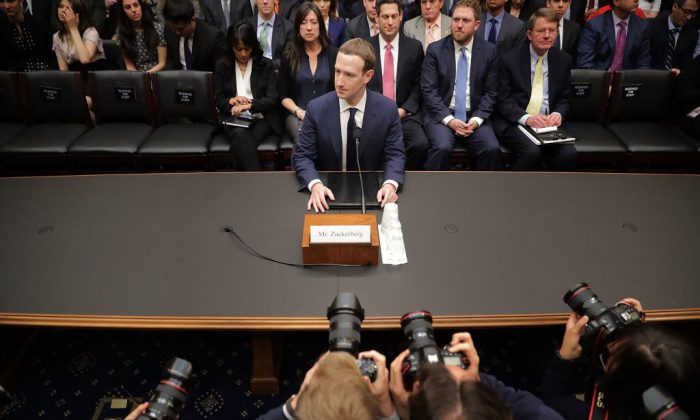 Facebook CEO Mark Zuckerberg believes his own platform, and the internet at large, should follow the European model for regulating internet companies and data. In a Washington Post op-ed, he called for baselines on forbidden content and systems to minimize harmful content, through a “more standardized approach.”

Of course, the immediate concern for many internet users is whether this “standardized approach” would include political censorship, and whether the idea of “harmful” content includes the nearly endless array of topics people online now find offensive.

Facebook, Twitter, and other online gatekeepers of information are already on the hot seat for censoring conservatives. In 2016, for example, Gizmodo reported that Facebook staff intentionally prevented conservative news from appearing on its trending news section. In 2018, Twitter engineers were caught on video by Project Veritas explaining how they use algorithms to censor political opinion.

This topic has only grown more heated over time. President Donald Trump wrote in an Aug. 18, 2018, tweet: “Social Media is totally discriminating against Republican/Conservative voices. Speaking loudly and clearly for the Trump Administration, we won’t let that happen. They are closing down the opinions of many people on the RIGHT, while at the same time doing nothing to others.”

Social Media is totally discriminating against Republican/Conservative voices. Speaking loudly and clearly for the Trump Administration, we won’t let that happen. They are closing down the opinions of many people on the RIGHT, while at the same time doing nothing to others…….

After Facebook briefly deleted Raheem Kassam’s account through an alleged error, the global editor-in-chief of conservative news site Human Events wrote on Twitter on Feb. 26, 2019: “How come it is only right wing/conservative accounts that get ‘removed in error’ pending ‘investigations’? And who watchers the watchers in this regard? #StopTheBias”

How come it is only right wing/conservative accounts that get "removed in error" pending "investigations"? And who watchers the watchers in this regard? #StopTheBias https://t.co/nxK1uNFyyS

It’s because of incidents like this that conservatives are often wary when people like Zuckerberg start talking about new controls on what can and cannot be said on his platform—let alone for the entire internet.

Meanwhile, the internet itself is fragmenting. China, which has maintained its own heavily censored internet behind the “Great Firewall,” is now building infrastructure for an internet totally separate from the rest of the world’s. Russia is talking about establishing a similar system of “internet sovereignty,” and the European Union is drifting further along its totalitarian bend with its recent Article 13 ban on internet memes.

This is likely where the internet is heading. It’s a new direction of global “intranets” where each country has its own separate infrastructure, and its own regulations; and where companies need to tiptoe around a kaleidoscope of laws and offenses of each respective country in order to run their websites without getting sanctioned.

And sanctions on websites are what Zuckerberg seems to be talking about. As Zuckerberg proposes in his op-ed, the new regulations “should establish a way to hold companies such as Facebook accountable by imposing sanctions when we make mistakes.”

Of course, it’s easy for people like Zuckerberg to call for such things. Massive companies like Facebook could absorb the costs of sanctions without going under, and they also have the staff and finances to implement complex nation-by-nation censorship codes—down to algorithms to check each post. But most other platforms don’t have these resources.

Much of this ties to encroaching centralization and to the new socialist fascination that the new left has fallen into.

Yet these changes also highlight one of the major issues with socialist centralization overall. Vast regulations and high taxes typically don’t affect the folks at the top or bottom of society. More often, it’s the people in the middle who pay the price. And it’s the internet companies in the middle that would likely go under if Zuckerberg got his regulatory wish.

Under such systems, online forums could be held liable in different countries for the political opinions of their users. Independent news sites could go out of business for reporting stories outside the established narrative. And even individuals posting their opinions on websites like Twitter and Facebook could find themselves talking to authorities about their web-based “thoughtcrimes.”

In China, this is already the reality for businesses and internet users; in Europe, it is rapidly becoming the reality; and in the United States, there are groups and businesses looking to make it a reality.