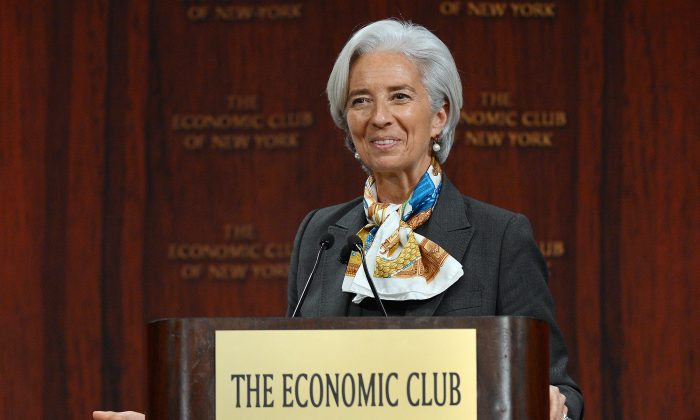 IMF Managing Director Christine Lagarde speaks on 'Global Policy Actions to get Ahead of the Curve' in front of the Economic Club of New York, in New York, April 10, 2013. In the speech, Lagarde reiterated the IMF's stance that global fiscal deficits should be reduced over the long term, without doing harm to the economy.(Emmanuel Dunand/AFP/Getty Images)
Business & Economy

Government deficits have been of great concern and the United States are not excluded, sporting a fiscal deficit of 5.4 percent as of May 2013. Persistently high deficits inevitably lead to economic problems. The bad news: The whole world is the same situation as the United States, or even worse off.

A government deficit occurs when a government doesn’t collect enough taxes to pay for all its expenses.

Government debt is comprised of expenses, such as interest on the public debt, salaries for employees, entitlements, military spending, and infrastructure projects.

However, there are more ways than just collecting taxes to address a deficit problem. Some of them include decreasing salaries for government employees, cutting back entitlement programs and services, charging a fee for services and taxing all purchases by the public at a higher rate.

“The burden of government debt is born by government employees, taxpayers and bondholders.
Above all, politics determines who bears the costs,” states an article on the Global Financial Data (GFD)website.

The Paris-based Organization for Economic Co-operation and Development (OECD) updated its semiannual forecast of government deficits as a percentage of each given country’s gross domestic product (GDP) on May 29, showing that the United States isn’t the country with the highest deficit.

GDP is the monetary value of goods and services produced at a given point in time by a particular country.

Japan earned the dubious honor of being the country with the highest deficit at 10.3 percent of GDP in 2013, increasing by 0.4 percent from 9.9 percent in 2012.

Given the unsustainable deficits, the United States reduced the gap through increases in taxes and spending cuts. For the International Monetary Fund (IMF), the speed of the cuts was too fast, however. “On the fiscal front, the deficit reduction in 2013 has been excessively rapid and ill-designed,” the international body said in its June 14 concluding statement of its mission to the United States.

The IMF says that America’s sequester (across-the-board spending cuts) is extolling a heavy price on the country in monetary terms in the short term and also could affect the country’s future growth prospects.

America’s spending cuts should have been carefully and not arbitrarily selected. To take funding from education, science and infrastructure is short-sighted, especially since the country’s future is at stake.

U.S. growth is projected to slow to 1.9 percent in 2013 given the extremely fast rate of deficit reduction. It should accelerate again in 2014 to 2.7 percent. America’s growth will also be held back by weakened growth worldwide, in part because of lower exports.

“Risks to the outlook appear modestly tilted to the downside,” unless the [U.S.] unemployment situation improves and the long-term unemployed return to work,” said the IMF in its concluding statement.

Economists that follow the Keynesian school suggest that deficit spending is acceptable during a recession and at times of high unemployment in order to compensate for the slow down in discretionary spending by the general public. On the other hand, during times of satisfactory employment levels, governments should then tackle deficit reduction, which in practice rarely happens.