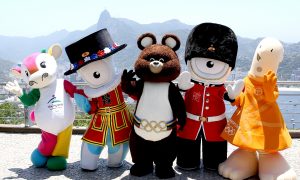 Ryan Bridges: Hi. I’m Ryan Bridges, a deputy editor at Stratfor. With me today is Seth Kessler. He is a Ph.D. candidate in sport management at the University of Texas at Austin. Seth, we wanted to do something a little bit different today. At Stratfor, normally we look at geopolitics through the lens of politics, economics, military and security affairs, energy — that sort of thing. Geopolitics isn’t just limited to those areas of our lives. One area of particular interest to both of us is how geopolitics affects sports, and the pinnacle of sports would be the Olympics. Something that has been in the news lately is the 2022 Olympics and its site selection. Can you tell us a little about that?

Seth Kessler: Sure. What I think most people don’t realize is the international Olympic committee, the IOC, is best looked at as an international NGO. It claims to be an apolitical organization, but as you look throughout history, its been involved in politics directly or indirectly for a long time. A lot of scholars look at the Olympics as a legitimizer. Countries on the rise often use it to try to show they’re up and coming and a regional power. We’ve seen the Olympics have historical significance like the 1936 Berlin Olympics. A lot of people call those the Nazi Olympics. It was when the IOC actually had a deal with Hitler. We’ve seen in the 1948 Olympics right after World War II and then as recently as 2008 when Beijing came out. A lot of people looked at it as Beijing’s coming out party, their reemergence on the international scene.

Ryan: When it comes to the 2022 games, it’s the one that’s really been in the news lately. A number of countries have pulled out of the bidding process. Can you update us on what’s going on there?

Seth: Sure. Most recently, Oslo, Norway, pulled out of the Olympics. Before that, we’d seen Kiev, Poland and Germany all pull out. A lot of them are pulling out for a variety of reasons. Pulling out because of the economic costs. The price tag on Sochi cost more than $50 billion. They’re not overly sold on the ROI being economically viable. Now we’re down to Beijing again for 2022 or Almaty, Kazakhstan, for 2022. Both of those are more authoritarian governments. We haven’t seen a lot of public support for the Olympics in the other countries.

Ryan: You know, 2022 is a long way away. The IOC will select the host in the summer of 2015, but that’s still a long time and a lot can happen. We’ve seen just in Ukraine a lot happen in the course of probably two years. What are some of the things the IOC has to factor in when they look at who can host?

Seth: Right. When the IOC is making the decisions, they have a variety of things they look at. Regional stability is definitely one. They won’t put it anywhere they think there’s going to be a coup or any kind of overturn of the government. Kazakhstan is definitely more unstable than Beijing at this point. If they were betting people, they would probably have to put it in Beijing. This really hurts the IOC’s bargaining power. In 2008 when they were in Beijing, they made demands on human rights, they made demands on pollution and environmental concerns, and that’s not going to be as much now. You can see when there are less bidders, the IOC has to make more concessions on their ideas of Olympians and in this can be kind of muted when they don’t have the bargaining power.

Ryan: Even with Kazakhstan, they were the first country to join Russia’s Customs Union, right? Is that going to influence the decision at all? Is that a positive?

Seth: It’s hard to say. I don’t sit in the rooms with the IOC, and I don’t really know how they make their decisions, but regional stability is a major concern. We’ve seen the IOC’s security budgets bump up, and in a lot of the Olympics since 9/11, we’ve seen a lot of concerns about terrorism, especially after Munich. They’re concerned about what can happen and where is the most able and where they can’t control. I would think they would prefer Beijing over Kazakhstan because they’ve been there before and they have probably more control over the security measures.

Ryan: One of the things that you mentioned was the price tag in Sochi was so high. A lot of the countries we saw pull out were in Europe. Europe has kind of got its own economic crisis going on. How is that influencing countries’ decisions to even keep their bid in for the Olympics.

Seth: Cities and countries are more and more unaccepting of the idea that these one-time mega-events are economically viable. They are seeing more and more that stadiums are left over. Most of the jobs created are only temporary. Only 10 percent of the jobs that are created from a one-time mega-event stay. A lot of countries, especially countries with low unemployment, have a hard time justifying why they would continue to do this. Also, they have to be concerned about how when you spend money in one place, you cant spend it in another place. These have hefty price tags. These are billions and billions of dollars. The more remote and the more places that don’t have an infrastructure, the higher the price is going to be. A lot of countries have been turned off by these. The academic literature has shown time and time again that these one-time mega-events like the Olympics are, in economic terms, a loss for these countries.

Ryan: One of the things that came out when Oslo pulled out was that the IOC was making some pretty absurd demands. Is that a factor at all for some of these countries?

Seth: Yes. A lot of these countries are also claiming that, in addition to the economic concerns, the transparency of the process, the transparency within the IOC is not very transparent. They’re concerned with how they’re going to connect with them and how it’s going to play for them. What the IOC has been trying to do lately is to introduce some revision to the bidding process that allows for more transparency in a kind of partnership with these host cities and countries versus more of a contract that they had with all these demands. The IOC is often criticized for being very lavish and wanting to live the high life, and it doesn’t play well, especially in countries that are having economic issues.

Ryan: Well thank you for your time, Seth. It’s something that we will be following at Stratfor, and I know that you’ll be following it as well. I hope we can have you come back next summer when the IOC has actually selected the city. That’s all the time that we have, for more information, please visit www.Stratfor.com.

“Conversation: The Geopolitics of Olympic Site Selections” is republished with permission from Stratfor.