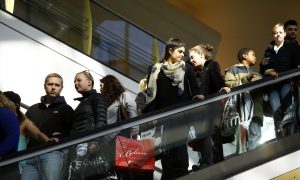 The Geopolitical Origins of Thanksgiving

Ben Sheen: Hello and thank you for joining us. My name is Ben Sheen and I’m one of Stratfor’s managing editors. And I’m joined here today by Matt Powers, our director of research.

Matthew Powers: Thanks for having me.

Ben: Great to have you here Matt. And today we’re going to be talking a little bit about the historical origins of Thanksgiving itself, which is obviously widely celebrated it in the United States. And although we’re a global company, Stratfor’s actually based in Austin, Texas, and many of our employees here in Austin will be going to see their friends and family for Thanksgiving. But as always at Stratfor, we never look at anything at face value. There are deeper reasons, political, geographical, that feed into Thanksgiving. So what actually makes somebody leave their home country, in this case England, and travel overseas?

Matthew: Well, a lot of this comes down to why people came to what became America. A lot of people came just for purely for financial reasons, they wanted to try and turn profit and the New World seemed like a good place to do that. One of the things that really made New England distinct from other colonies in the New World was that a lot of people came with their families and tried to build a new life here like a long-term new settlement. And this was often because of religious reasons, not exclusively, but people in England began to feel unsure of the direction that their country was going. They weren’t sure that the English church was moving in the right direction, and these were, in America we learned they were Puritans. These were Protestants who wanted to reform the Church of England and make it, as they would have seen it, more protestant, more correct.

Ben: And they felt a threat from Catholicism at the time didn’t they?

Matthew: Yes. And this was because the kings of England in the early 17th century, James I and Charles I, were seen by many of the more zealous protestants as either Catholic or at least Catholic sympathizers. And a lot of this came from the kings of England looking at their geopolitical position, looking at the situation in Europe and seeing that the two most likely threats to England came from France or Spain, which were both Catholic at this time. If you were the king of England a very reasonable option would be to ally with one of those countries against the other one. This is a very typical realist move. Charles I of England, when he was married into the French royal family, this was a very, this caused a lot of concern within English Protestants.

Ben: And that was a dumb thing at the time wasn’t it, to actually marry in between the permanent families of the countries of France, Germany, Spain?

Matthew: Yeah, and so to the kings of England this was just how it was done. The royal families marry into other important royal families for political reasons and to secure the dynasty in various ways. But to a lot of the people in England who were hearing news from the continent, this looked like just further pulling England down the wrong path away from Protestantism towards Catholicism or some sort of pseudo-Catholicism.

Ben: And this must have made the position of the Puritans in England what they would consider to be untenable at that time?

Matthew: Precisely. Puritans hadn’t been exactly thrilled with Queen Elizabeth, but they could at least kind of live with her. And then when James came in they felt very confident that he had been the king of Scotland and so they felt that very good and that he’s coming from very Protestant Scotland and so he’ll come in and institute the type of church they want, not really realizing that James was very pleased to get away from the more zealous Scots Protestants. So when he came he instituted policies that puritans found very hard to live with, and so the first people to settle New England from England came during James’ reign. The people in the U.S. we associate with the Mayflower they came in 1620, which was under James’ reign. Even though it was a very small settlement, this was one of the first settlements and the one that we get our Thanksgiving tradition from.

Ben: Absolutely. But am I right in thinking that this was not the only settlement that people from England formed?

Matthew: Yeah absolutely. So they came to Virginia and the Caribbean and other places. In 1630, the first large wave of settlement from England to the New World really began to get going at least to New England. In addition to New England in 1630, they also found a colony in the Caribbean at a place called Providence Island off the coast of modern Nicaragua.

Ben: So you mentioned that it wasn’t really until the 1630s that the real sort of waves of colonists started moving from England to the Americas. What was happening in England at the time? Was there anything that really precipitated that movement?

Matthew: So from 1630-1640 was the real wave of English immigration to New England. And this was really based on what was going on in England at the time. They started to leave to essentially, they had given up hope on reforming England, but then in the early 1640s,a civil war against Charles started and this end the wave of Puritan immigration to New England because they started to stay, remain in England and fight against Charles or work with Parliament to try to create what they had hoped to create in in New England in England itself. And in fact a lot of people from New England went back to England during this period to fight in the civil wars.

Ben: So was New England an attractive to settle at the time?

Matthew: So in a lot of ways it really, it shouldn’t have worked. It was a very difficult area to settle. It didn’t have a lot of the things that made it attractive to other parts of the New World. It didn’t have obvious natural resources, it didn’t grow cash crops easily and so you wouldn’t have picked this area for a settler colony necessarily. But obviously it did grow and flourish and its population expanded rapidly over the century. It became one of the real foundations of the thirteen colonies and it became one of the most troublesome areas to the English crown. So these people who had left England over disputes with the king of England were in the 18th century then the very same region that was causing the most trouble for the English king again. The Puritans and their ancestors were kind of a long-term thorn in the side of the English crown.

Ben: Matt, Thank you Matt. That was a real fascinating glimpse at a period of history that really quite often overlooked. Unfortunately that’s all we got time to talk about today, but I very much encourage you to read Stratfor’s Geopolitics of Thanksgiving and the Puritan Struggle, which publishes tomorrow. Thank you.

“Conversation: The Geopolitical Origins of Thanksgiving” is republished with permission of Stratfor.