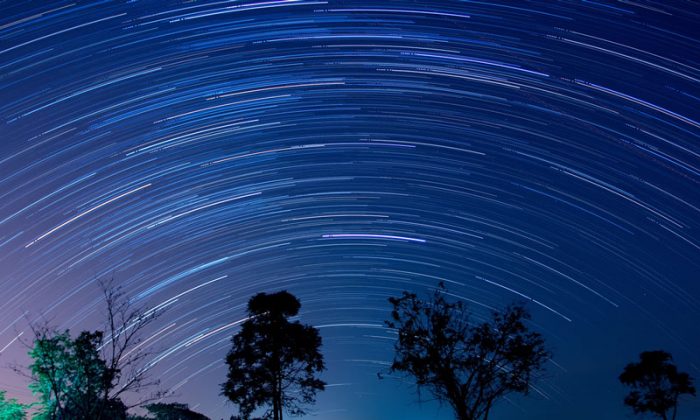 The best meteor shower of the year should put on an impressive display this weekend – weather permitting – with the annual Geminids poised to light up the sky with bright, long meteors visible as frequently as every couple of minutes.

Meteor showers occur when the Earth ploughs through trails of debris as it spins its yearly course around the sun.

This weekend, the Earth will pass through the densest part of a debris trail left behind by an asteroid known as 3200 Phaethon. The resulting meteor shower, known as the Geminids, will reach its peak late on Sunday evening, December 14 in Australia (see here for times in other locations).

The Best of the ‘Big Three’

In a typical year there are three annual meteor showers that stand head and shoulders above the rest.

January’s Quadrantids and August’s Perseids are only really visible to observers in the northern hemisphere. But this month’s Geminids are visible in both hemispheres and so provide a spectacle to brighten Australian summer nights.

One of the things that makes the Geminids so spectacular is that each meteor seems to last just a little bit longer than those in other showers. The reason is down to their unusual heritage – this is the only meteor shower known whose parent body is an asteroid, rather than a comet.

Most meteor showers are made up of fragile, fluffy dust grains shed by a comet. These grains are shed as the comet nears the sun.

In contrast, the Geminids are thought to be rocky fragments, eroded from the surface of the asteroid Phaethon.

We Love a Sun-Burned Asteroid

Phaethon swings closer to the surface of the sun than any other named asteroid – passing perihelion (closest to the sun) at a distance of about 20 million kilometres, well inside the orbit of Mercury.

At its most distant, Phaethon is almost 2.5 times further from the sun than Earth, and hence receives far less radiation at that point.

As a result, Phaethon’s surface is continually forced to expand and contract as it experiences some of the most extreme temperature variations in the solar system. Such drastic change is thought to gradually fracture the asteroid’s surface, chipping off fragments and creating a stream of debris along the asteroid’s orbit.

Earth passes through this debris each December, and the meteoroids it encounters are significantly denser than those of other meteor showers, thanks to their unusual origin. This allows them to survive longer as they ablate and shine brightly in the night sky.

Captured in December 2012, this Geminid is one of the brightest fireballs observed by the NASA network of meteor cameras in over four years of operation.

The Origin of the Geminids

For many years after they were first reported, in the 1860s, the origin of the Geminids remained a mystery.

In the mid-20th century, US astronomer Fred Lawrence Whipple tried to solve that mystery. He used a photographic meteor survey to discover that the meteoroids in the Geminid stream moved on an extremely eccentric orbit, with a period of just 1.65 years – an orbit far smaller than those of all known comets.

In 1983, the Infrared Astronomical Satellite (IRAS) discovered a fast-moving asteroid. Follow-up observations allowed the asteroid’s orbit to be determined, and the result was astonishing.

The asteroid followed an incredibly elongated path, plunging far closer to the sun’s surface than any asteroid known at the time. More surprisingly, its orbit was striking similar to that calculated by Whipple, half a century earlier, for the Geminid meteoroids.

So the mystery of the origin of the Geminids was solved; their parent discovered. The asteroid was named 3200 Phaethon after the son of Apollo, who in Greek mythology drove his father’s chariot too close to the sun.

Thanks to the discovery, astronomers researching meteor streams now check the orbits of newly discovered asteroids, as well as those of comets, to see whether they could one day too spawn new showers. For now, the Geminids remain the only confirmed asteroidal meteor shower.

So When and Where to Look?

Across Australia, the constellation of Gemini, the twins, rises late in the evening during December and can be seen until sunrise.

From the southern hemisphere we see the twins standing on their heads, as marked by the bright stars Castor and Pollux.

The shower’s radiant (the point in the sky from which the Geminids appear to radiate) is located near the bright star Castor. And the further north you are, the earlier the radiant will rise in the sky:

In the first hour or so after the radiant rises, the number of Geminids you might see will remain low – but it is well worth going outside, if you have clear skies, for a couple of reasons.

First, it takes time for your eyes to fully adapt to the darkness, so allowing maybe half an hour to become fully dark-adapted is usually a good idea.

Second, and perhaps more important, although the rates just after the radiant rises will be low, the meteors you might see could be spectacular. Known as “earth-grazers”, they often span the sky, giving a beautiful introduction to this wonderful shower.

As the night passes, the radiant will get ever higher in the sky and the number of meteors you see will climb with it. As a result, you should be able to spot a meteor every few minutes.

Unfortunately, the moon will rise at around midnight local time in Australia (or 1am local time for daylight savings) at which point the fainter meteors will be washed out.

But so plentiful are the Geminids, and so rich in bright meteors, that the shower should continue to put on a good show for the rest of the early hours of Monday morning.

To see the best display, you should look a short way to the left or right of Gemini in the sky. The further from the radiant you look, the more spectacular the meteors you see will be.

But if you look too far from the source, you will miss those flying in different directions. If you can find the constellation Orion, that’s usually a great place to spot a good number of Geminids.

So keep your eyes peeled on Sunday night – and you may get to see a natural display of fireworks to bring a fascinating astronomical year to a close.

*Image of “star trail” via Shutterstock