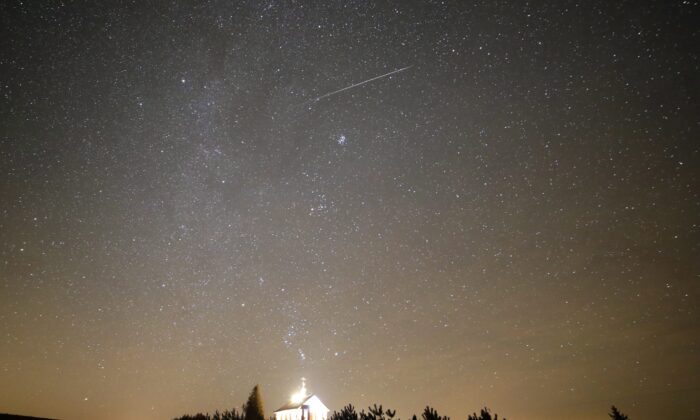 A meteor streaks across the sky during the annual Geminids meteor shower over an Orthodox church on the local cemetery near the village of Zagorie, some 69 miles west of capital Minsk, Belarus, on Dec. 13, 2017. (Sergei Grits/AP Photo)
Canada

The Geminids Are Coming! Here is How and Where to See the Best Meteor Shower in 2020

Stargazers are in for the best meteor shower in years, as the Geminids coincide with a new moon with minimal light interference.

The Geminids are considered the best periodic meteor shower, and this year it will occur between Dec. 4 to Dec. 17, and is expected to peak on Dec. 13 and 14.

“It will be the best meteor shower of 2020, no question about it,” Bill Cooke, a meteor expert at NASA, told Space.com. The prime hours to watch Geminids activities is between 11 p.m. to 4 a.m. In the northern hemisphere, the best observation time is at about 2 a.m., and after midnight for stargazers in the southern hemisphere.

The meteors can be seen after dark without binoculars or a telescope.

Meteor showers all have a radiant, the point in the sky from which they seem to come from. The Geminids radiant lies in the constellation of Gemini the Twins, which is how it got its name.  It is near the bright star known as Castor, which represents one of the Twins’ heads.

According to International Meteor Organization, observers do not have to face the Gemini constellation, as the meteors can appear in any part of the sky.

While meteor showers have different patterns, the Geminids meteors shoot outward from its radiant. Geminids meteors will appear slowest and shortest near the radiant, and fastest and longest at a point 90 degrees away from the radiant. This is because of foreshortening, as the meteors closest to the radiant are seen moving toward the observer.

3200 Phaethon Phaethon was discovered by NASA on Oct. 11, 1983 via the infrared astronomical satellite. It was named after Phaethon, son of the sun god Helios in Greek mythology, due to its close proximity to the Sun.