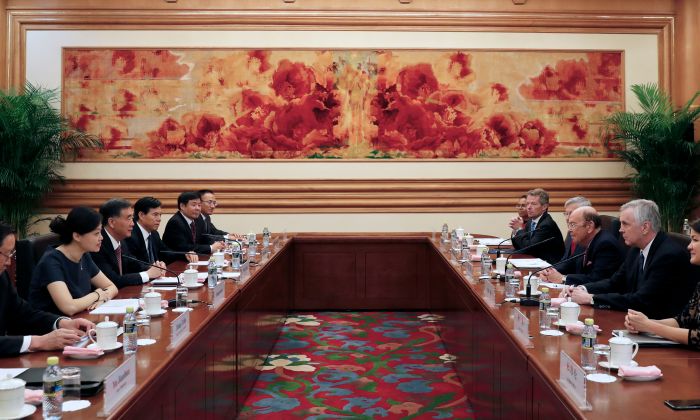 The Fundamental Problem of Sino-US Relations

Internationally, there is a popular saying: the CCP’s system is highly efficient. Therefore, when Westerners think of problems in China, they always think that when they have talked with the dealings, the result is exactly the opposite: the Chinese government will never have credit, and its words cannot be counted on and lack any credit. Why is this?

The first layer of the problem is that the words of the central government can not be counted for. Because according to the theory of the Communist Party, only they are the correct representatives, others are nothing. According to the standard cult theory, anyone that does not meet the standards of a cult is not considered human and is ineligible for rights; thus it is not a violation of morality to not carry out promises, nor to use whatever means. The most standard and most straightforward expression is Deng Xiaoping’s cat theory: “regardless whether it is a black or white cat, any cat that catches mouse is a good cat.”

Another layer of the problem is that the Communist Party’s system is not about only one or a few emperors, but thousands of emperors. The phrase “the decrees cannot get out of Zhongnanhai”, is exactly talk about this system. The central order is not necessarily approved by the provinces; the provincial orders are not necessarily approved by the cities and counties. Therefore, trade barriers and non-tariff barriers cannot be resolved by the central government. This is the second important reason why China has no credit.

Apart from China not being a democratic system and having no need to be accountable to the people, one-party dictatorship is another major cause of decrees that “cannot get out of Zhongnanhai”. The decrees are ordered by the governments, meanwhile the Communist Party committees also order their decrees, but the governments must obey the party committees, yet the party committees do not have to be responsible. The lower-level party committees do not need to obey the higher-level government, and they can make their own orders. This chaotic system, the system of one-party dictatorship, is the root cause of chaos and the root cause of the creation of the emperor. This is also a common problem in all authoritarian systems.

For example, Beijing blocked the flour in Hebei, so Hebei returned to block vegetables. Guangdong imports rice and pork to stabilize prices, then Hunan returned to block rice and pork. Qinghai blocked the wool from Gansu, then Gansu countered by blocking grain and coal. Similar domestic trade wars and trade barriers will not appear in the newspapers, but they are realities in China. Under this system of local dictatorship, county officials can not overcome those lower level officials who are in charge, and trade wars and barriers are not just for foreign countries. The promises of the central government cannot be realized — it is impossible for foreigners to achieve them just as the Chinese themselves cannot.

The current system in China is similar but not identical to the system in ancient times. Although authoritarian politics are always used to manage the market economy, the ancient legal system was effective, without having other power centers intervening in the legal system. The system in China now is that extra-judicial intervention is greater than the legal system, usually said as “the Communist Party is bigger than the law”. In fact, it is lawless. In ancient times, only in the final stages when the dynasty about to collapse, did the corrupted state of the lawless appear. Now with the Communist Party being above the law, there will not be a unified legal system from the root. This is the fundamental problem of Sino-US relations and the fundamental conflict between Chinese society and the Communist Party.

Of course, the fundamental strategy of the Communist Party is to exploit the American and Chinese people with unfair trade. Even if the central government verbally compromises with the United States, thousands of local emperors will not give up their rights to exploit the Chinese and American peoples. They are already accustomed to rebel against the policies and decrees of the central government. Therefore, the fundamental problem between China and the United States is lack of credit, due to the invalidity of China’s legal system.

The key to changing the trade war between China and the United States in the direction of fair trade is that China must change the system of the emperor Communist Party being above the law. When it has established an independent judicial system free from any interference, a trade agreement between China and the United States may become effective. Otherwise, even if Xi Jinping and Li Keqiang were sincere, they would not be able to comply with the agreement.

Under the premise that it is impossible to immediately change the one-party dictatorship system, Sino-US negotiations must attach requirements of establishing an independent and effective judicial system, supervised by international supervisory bodies. This supervision must also provide punitive measures, instead of a deceptive institution without so-called teeth. In this way, the agreement can be guaranteed to be carried out, which will be beneficial to both the Chinese and American people, instead of just being only beneficial to the capitalists in China and the United States while people in both countries suffer.