The FTX Collapse: A ‘Perfect Crisis’ With Many Unanswered Questions

Just as the pandemic was used to deny Americans their constitutional rights and create the global recession, will the FTX situation play a similar role to invalidate cryptocurrencies? 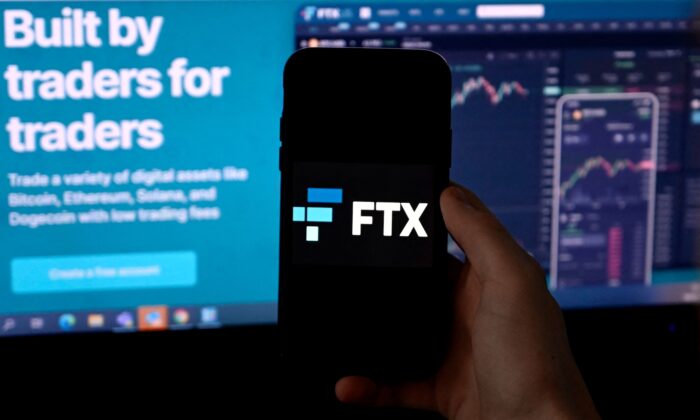 This illustration photo shows a smartphone screen displaying the logo of FTX, the crypto exchange platform, with a screen showing the FTX website in the background in Arlington, Va., on Feb. 10, 2022. (Olivier Douliery/AFP via Getty Images)

As the impact of the FTX collapse continues to unfold, there are several aspects of the event that reach well beyond the cryptocurrency world. And as more information comes out, the more important the situation appears.

A Few Facts and Curious Coincidences

First of all, the massive financial scandal has left investors with billions of dollars in losses. That in itself makes the debacle one of the costliest on record. The speed at which FTX both attracted investors and lost all of its money is also unprecedented. Its CEO, Samuel Bankman-Fried (also known by his initials SBF), went from a net worth of up to $26 billion to essentially broke in a matter of days.

It’s also amazing how Bankman-Fried was able to acquire such a large amount of investor cash so quickly and publicly.

Why didn’t that attract some sort of regulatory inquiry despite warnings from market experts in congressional testimony?

The Madoff of Cryptos

This is a very good question since the dynamics of the collapse involved evident malfeasance on the part of Bankman-Fried. Not only were basic capital protections ignored, but FTX investors’ cash was diverted into Alameda Research, an investment firm owned by SBF. That’s an illegal and unethical conflict of interest that should have already drawn criminal charges against him, especially in light of the scope of the financial losses. He has rightly been described as the Bernie Madoff of cryptocurrency.

Yet somehow, amazingly, SBF has yet to be arrested. What’s more, regulators missed these obvious red flags. Or did they simply ignore them?

And if regulators ignored the FTX transgressions, why would that be?

The simple answer, though certainly not the only or complete one, is that Bankman-Fried and FTX were and remain politically connected to very powerful people. That’s a well-established fact.

Another well-established fact is that Bankman-Fried’s parents are both Stanford professors. His mother, Barbara Fried, teaches courses in federal income taxation, legal theory, tax policy, distributive justice, and moral psychology. His father is an expert in taxation policy and has testified before Congress. Both are deeply connected to the Democratic Party establishment, and both profited handsomely from FTX to the tune of some $300 million in properties.

But did politicians help protect FTX along the way?

That, too, has yet to be established. It is a fact, however, that the political elite in Washington, our elected representatives, benefitted greatly from FTX. Since 2019, Bankman-Fried has been the second largest donor to the Democratic Party, contributing $38 million of essentially stolen investor funds from FTX to the party.

But it wasn’t just the Democrats that were funded by FTX. In that same period, Bankman-Fried’s co-CEO, Ryan Salame, who ran various parts of FTX, donated about $20 million to the Republican Party. So both parties gained from large financial contributions by FTX.

One can’t help but wonder how many blind eyes and legal protection such contributions may have bought Mr. Bankman-Fried. That is speculative but not unreasonably so.

Furthermore, hundreds of millions of dollars have been stolen from the exchange and funneled into bitcoin. That dynamic is turning the world’s top cryptocurrency into a haven of thieves and tarnishing its already damaged reputation. Bitcoin is already under duress as energy costs associated with mining have risen while bitcoin’s price and credit sources have contracted.

The timing of the FTX collapse is another coincidence. It certainly helps the anti-cryptocurrency crowd. Critics warn that money, especially cryptocurrency, is just too important to leave to the market and private issuers.

That argument sounds reasonable, but it’s also highly coincidental with the FTX crash occurring in the same period as the Federal Reserve’s public announcement and initial testing of its Central Bank Digital Currency, known as the digital dollar.

Why’s that important? There are at least a few reasons.

A Perfect Crisis for the Digital Dollar

One is that the FTX crash is the perfect crisis to help “demonstrate” to the public that unregulated, decentralized, and anonymous exchanges, and trades and holdings of cryptocurrencies that are beyond the purview of the federal government pose a threat to investors.

That’s true, but the same could be said about unregulated real estate transactions or the buying and selling of used cars. Nonetheless, the cryptocurrency chaos can be used to justify a federal crackdown on the industry.

Another reason is that the American public will not be easily convinced of the need or desirability of the digital dollar. The FTX collapse may be one way to help shatter public confidence in all cryptocurrencies as safe and viable alternative investments in order to persuade the public to accept the issuance of the digital dollar.

The digital dollar will be transparent and programmable to provide the Fed with new levels of control over our spending habits, strip away privacy, and greatly restrict personal autonomy. In short, digital currency is a formula for tyranny that will be presented as needed for currency security.

Who Are the Shadow Players?

There are other curiosities about FTX and its sudden downfall, such as the identity and influence of FTX and Alameda Research co-founder and CTO Garry Wang. He has been silent so far, and not much is known about him.

Finally, it’s certainly coincidental that Bankman-Fried sought a bailout from his industry rival Changpeng “CZ” Zhao, owner of Binance, the world’s largest cryptocurrency exchange. Some believe that China-born Zhao’s loyalties still lie with Beijing. That is not known at this time.

But as enigmatic as the people surrounding the fall of FTX appear to be is how it was allowed to happen in the first place, which leads to at least one more question …

Was FTX designed to fail?