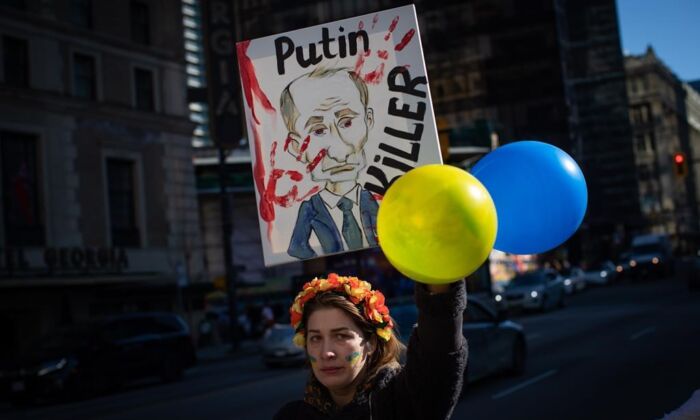 A woman holds a sign with a caricature of Russian President Vladimir Putin during a rally in support of the people of Ukraine in Vancouver, on Feb.24, 2022. (The Canadian Press/Darryl Dyck)
Canada

MONTREAL—Yellow and blue flags flew in cities across Canada on Thursday as Ukrainian Canadians organized demonstrations to denounce Russia’s attack on Ukraine and urged Ottawa to act swiftly to defend their homeland.

In Montreal, several dozen protesters gathered in front of McGill University, waving signs with messages ranging from “I want to see my grandmother alive,” to the more militaristic “Arm Ukraine.”

Larysa Grynko, who came to Canada from Ukraine in 2011, was one of several who helped unfurl a large banner in Ukrainian blue and yellow. Her voice catching, she said she was “devastated” by the events.

“Words cannot describe the terror that we feel for families that stay in Ukraine,” she said. Grynko said she had spoken to her family, and they were safe for now and had confidence in the Ukrainian army.

She switched briefly to Ukrainian to deliver a tearful message that she said meant, “Be safe and be strong.” In English, she urged Canada not to discount the risk posed by Russian aggression.

“If Russia is not stopped in Ukraine, it will not stop in Ukraine,” she said. “It will go further, aggressing other countries.”

Several Canadian cities, including Calgary and Montreal, said they would fly the Ukrainian flag over municipal buildings. Demonstrations were also planned in Toronto, Vancouver and Edmonton to denounce the Russian military strike.

Olga Gogoleva, who’s from the Siberian region of Russia, carried a sign at the Vancouver protest that read, “I am Russian and I am against the war.”

“I’m here to support Ukrainian people,” Gogoleva said where a crowd of about 200 demonstrators were rallying at the city’s art gallery.

Natalie Jatskevich, the head of the B.C. branch of the Ukrainian Canadian Congress, said she’s disappointed in the international response to the conflict.

“I think the world is a little bit slow in reacting,” she said. “Ukrainians are strong. We are not asking anybody to fight for us, but we need means to fight. We need defensive weapons and we need (them) now.”

Protester Sofiya Pylypenko moved to Canada 12 years ago but still has family in Kharkiv, Ukraine, just 40 kilometres from a Russian border.

She said following Putin’s address Thursday, she began getting calls from family telling her tanks were coming in and explosions had started. She said it’s encouraging to see Ukraine step up to defend itself but hopes more support from other nations is coming.

“We shouldn’t be fighting this alone,” she said.

Yaroslav Broda, vice-president of the Ukrainian Canadian Congress’s Edmonton branch, said the rally in front of the Alberta legislature Thursday would be an opportunity for people from the community to come together and raise awareness about Russian aggression happening in Ukraine for years.

“This is about solidarity, because there is not much we can do being where we are,” he said.

Broda said he has aunts, uncles and cousins living outside the capital city of Kyiv. The 28-year-old said his cousins, who are about his age with children, have fled the area, but family members of his parents’ generation have decided to stay.

He said the tensions with Russian had been intensifying and cooling off over the last decade and people on the ground were becoming desensitized to the conflict. “I’m sure there was a lot of head-shaking this morning,” Broda said. “They went to bed thinking it was just another day living next door to Russia, but now they have realized it has gone off.”

Michael Shwec, the head of the Quebec branch of the Ukrainian Canadian Congress, said the whole world has a duty to rally behind Ukraine.

He said a failure to act strongly in response to Russian aggression would send a signal to other authoritarian countries and could spell trouble for democracies across the world.

“There is no capitulation. There is no appeasement. It doesn’t work,” he said in a phone interview. “Because if we don’t do something now, there are other countries in this world that have very similar ambitions that (Russian President Vladimir Putin) has.

“Today, the free world must rally to the Ukrainians’ cause. Today, anyone who values human rights, democracy and liberty is a Ukrainian.”

Shwec called on Canada to respond with the strongest possible sanctions, as well as providing materiel support such as anti-aircraft weapons and naval defence systems. He said his organization will also be meeting with officials at the federal, provincial and municipal levels to discuss plans to resettle Ukrainian refugees who will be looking for a safe place to live.

Dinara, a 24-year-old student from Russia, stood at the Montreal rally holding a small sign reading “Russians against war in Ukraine.” She said she wanted to show her support for her Ukrainian friends but also to protest the war on behalf of other Russians who don’t dare to under Putin’s regime.

“They are not able to protest or do anything in Russia, so I’m standing here for them to protest the government action,” she said.

Dinara, who did not want to give her last name because she worries about repercussions against family in Russia, said she believes most Russians oppose war. “We’re not supporting a war, we’re against the regime and that’s the general sentiment I promise,” she said. “It’s just that we can’t express it back home.”