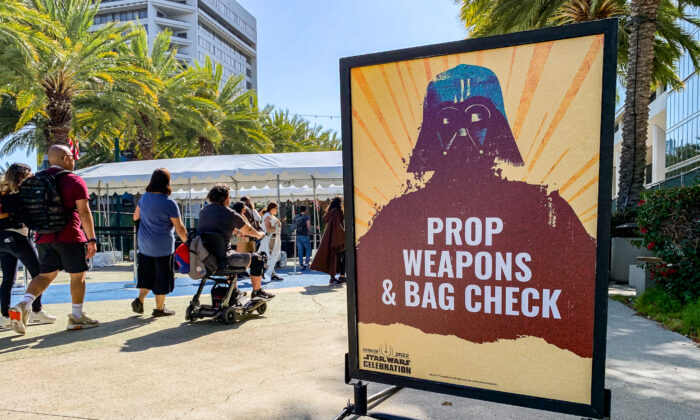 ‘The Force’ Arrives in Anaheim

ANAHEIM, Calif.—Within the bustling resort district surrounded by towering hotels and attractions from the Disneyland theme park, a child suddenly lifted his lightsaber and lightly whacked his father as they were walking with a group of family members on Harbor Blvd.

The father, wearing a navy blue t-shirt depicting a cartoon version of Baby Yoda from the Star Wars show “The Mandalorian,” gave his son a slight smirk as he continued walking with the group.

Most tickets were sold out even after a second round of tickets became available on March 15, and those who were able to attend the event say it was well worth the effort.

“I’m still processing it all,” David of Aurora, Colo., told The Epoch Times. “I think this is the best convention we have been to, thus far.”

David, who developed a passion for Star Wars at an early age, said that he was not only impressed with the exhibits—which included a nearly life-size version of a TIE fighter space ship—but also by the incredible detail of the various costumes that were made and worn by fans.

“One that really stood in there was a costume we saw of a bantha,” David said, referencing a woman wearing a costume of a wooly mammoth-like creature from the Star Wars planet of Tatooine.

“The costume was built over a shopping cart-like frame with wheels so it could be pushed around by the lady who designed it.”

Several feet away, three Star Wars fans dressed in tan Jedi knight costumes and green wristbands prepared for their entry into the convention courtyard area by opening their bags for a checkpoint screening area manned by a staff of over a dozen security officers.

The event laid out extensive health and security guidelines upon entry that included proof of coronavirus vaccination or a negative COVID-19 test, along with the requirement of wearing masks while enjoying festivities throughout the convention center. However, some Star Wars fans online said that they might hold off this year because of the regulations.

“Going to a con with all these restrictions would just kill the joy for me, I’d rather just watch the livestream comfortably from home,” one man commented on the event’s Facebook page.

“I really hope that by the time the next celebration rolls around things will be back to normal and the restrictions can be removed.”

But the event’s regulations were not enough to deter Star Wars fans from enjoying the celebration, which sold tickets ranging from single one-day passes to “Jedi Master” multi-day passes that were priced at $900.00 on the events webpage.

“Just seeing so many people that love Star Wars and so many people in costume and t-shirts, instantly it’s like you have something in common with everybody here,” said Star Wars fan Jennifer, also from Aurora, Col.

“It’s a neat community … someone [was] walking through, and they gave me a fist bump about my costume.”

Jennifer, clad in a Jedi knight costume, also had a metallic replica of a light saber handle that would make any avid fan jealous.

“I took the blades off for the celebration, but it just connects here on the belt of my costume.”

“I’d love to meet Ewan McGregor, but unless we can fist-bump into each other in the hall theres a slim chance of that,” Jennifer said with a smile. “But we’ll see; we’re here for a few more days.”

The 2022 Anaheim Star Wars Celebration schedule ends at 5:00 p.m. on Sunday. Although tickets are sold out, Star Wars fans may still find offers for tickets online though social media tags under #STARWARSCELEBRATION.