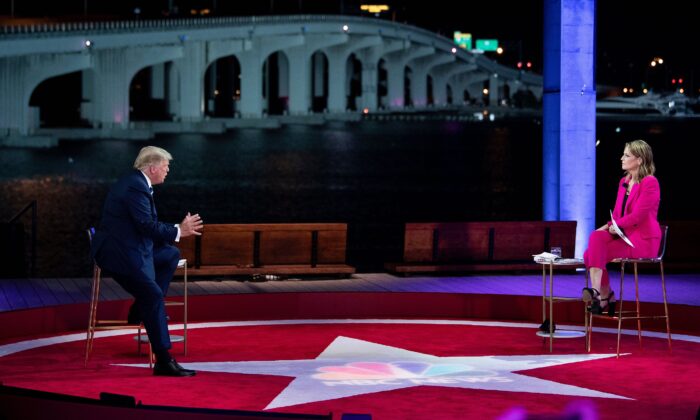 The Folly of the Media ‘Condemnation’ and ‘Disavowals’

It’s all the rage. Political figures are urged to apologize for something offensive they said or did. Their opponents hound them, often even dictating the precise verbiage the offender is supposed to use in his mea culpa … or else. “Disavow!” “Condemn!” The funny thing is the apology typically doesn’t change anything. The politician is usually only sorry he got caught.

It’s a game. Most everyone knows it but still plays it—because the media demands it.

A related phenomenon is the trend of demanding that politicians disavow or condemn something they, themselves, didn’t do. Of course, the goal often isn’t really to get the politician to disavow. And instead of saving him, an expression of regret may ultimately end his political career.

Such is the case with demands that President Donald Trump disavow racism, white supremacy, or some other variation of hateful behavior based on skin color. It’s worth noting how often he has explicitly done so: as much as, if not more, than any modern politician—quite possibly because his enemies so frequently demand it.

I put the cries for former Vice President Joe Biden to disavow Antifa violence in the same category. You can argue that he took too long to do it, or you can quibble with the wording he chose. But if the media were to demand that Biden use prescribed wording to condemn a particular kind of violence during most every subsequent public appearance he makes, it really only would serve to tar him with Antifa’s bad acts.

As I’ve recounted in my new book, the Trump-as-a-racist invention was largely popularized in August 2016. Yes, The New York Times and others flirted with the label months earlier. But it was the smear group Media Matters and its affiliates that bore down on it after the Trump-as-a-clown and Trump-as-dark-and-dangerous narratives didn’t seem to dissuade supporters. In fact, he seemed to grow more popular.

You might not believe it but, as the liberal University of Texas professor Alberto Martinez tracked, the media’s description of Trump radically changed when he entered the race for president.

“In 2004, a CNN documentary described Trump as ‘beloved,’ ‘the world’s most popular businessman,’ ‘literally the gold standard,’ ‘a national phenomenon,’ ‘Trump has always worked hard and lived clean,’ and ‘He really is very smart, very sassy, very tough, but a warm and caring guy,’” Martinez said.

Yes, somehow (according to his opponents) The Donald had fooled Hollywood and the media for 70 years before being unmasked as the unmitigated racist that he is today.

Sure, Mar-a-Lago was segregated when Trump bought it. And, yes, he sued the City of Palm Beach to open it up to blacks and Jews for the first time. But that was just for business reasons. Indeed, he was praised by civil rights activist Jesse Jackson. But that was in the old days before we knew. Yes, African Americans Dr. Ben Carson (HUD secretary) and Dr. Jerome Adams (U.S. surgeon general) hold high positions in the administration. And Trump holds black leadership events at the White House, has been endorsed by many black ministers, has been thanked by the head of the United Negro College Fund for providing permanent funding for historically black colleges and universities ($250 million a year), threw support behind Sen. Tim Scott’s idea for opportunity zones to benefit minority neighborhoods, and led the country as the unemployment rate for blacks fell to its lowest ever. But that’s just a smokescreen.

Trump disguising his true racism, his enemies would have us believe, is a subterfuge almost as clever as him being a woman-hater but naming so many women to top spots in his administration, or being an immigrant-hater though he married two immigrants and his children are children of immigrants. Or being anti-Semitic while moving the U.S. Embassy to Israel’s capital of Jerusalem and winning praise from Israel’s prime minister. What will he do next? Adopt a dog to hide the fact that he hates animals? Clever, that Trump!

The point is, Trump’s critics claim they know what he’s really all about because he supposedly refuses to disavow white supremacy.

The folly of this line of thinking is exposed when one looks at the record. Trump has, indeed, disavowed racism, but it hasn’t changed much of anything about how his enemies portray him.

As early as 2000, Trump distanced himself from racial hatred. NBC’s Matt Lauer interviewed Trump about the Reform Party, which Trump called “self-destructing” because of its affiliation with racists.

“What do you see as the biggest problem with the Reform Party right now?” asked Lauer.

“Well, you’ve got David Duke [former leader of the racist group Ku Klux Klan] just joined—a bigot, a racist, a problem. I mean, this is not exactly the people you want in your party,” Trump replied at the time.

The same year, The New York Times reported that Trump stated: “The Reform Party now includes a Klansman, Mr. Duke; a neo-Nazi, Mr. Buchanan; and a communist, Ms. Fulani. This is not company I wish to keep.”

In June 2015, candidate Trump called on South Carolina to remove the confederate flag from the state capitol. In July, he fired a campaign staffer whose past, racist Facebook posts surfaced. In 2016, when Trump learned he had been endorsed by Duke (the news was presented to him as if confirmation of his supposed racism), Trump disavowed the support at the media’s urging.

“David Duke endorsed me? OK, all right. I disavow, OK?” Trump said at a press briefing on Feb. 25, using the prescribed word: “disavow.” But the media was unsatisfied and continued to press him. So Trump tweeted the same thing a few days later on Feb. 28, including a clip from his earlier news conference. “As I stated at the press conference on Friday regarding David Duke—I disavow,” wrote Trump. No mention that he had already said so 16 years earlier.

In October 2016, when asked about white nationalist groups, the Trump campaign stated: “We have rejected and rebuked any groups and individuals associated with a message of hate and will continue to do so. We have never intentionally engaged directly or indirectly with such groups and have no intention of ever doing so, and in fact, we’ve gone a step further and said that we don’t want votes from people who think this way.”

After he won the election, Trump “disavowed” what the media called “white supremacists who cheered his election.” “Trump has condemned white supremacist supporters,” noted Fortune in November 2016, while going on to nonetheless question Trump’s supposedly racist tendencies.

In August 2017, after a woman was killed in an apparent racist attack at a rally in Charlottesville, Virginia, Trump stated: “We condemn in the strongest possible terms this egregious display of hatred, bigotry and violence, on many sides.”

He and Virginia’s governor “agreed that the hate and the division must stop, and must stop right now. We have to come together as Americans with love for our nation and true affection—really—and I say this so strongly—true affection for each other.” AP and others immediately published articles with titles such as: “Why won’t Donald Trump condemn white nationalism?”

In a statement on Aug. 14, 2017, Trump became more explicit, stating: “As I have said many times before: No matter the color of our skin, we all live under the same laws, we all salute the same great flag, and we are all made by the same almighty God. We must love each other, show affection for each other, and unite together in condemnation of hatred, bigotry, and violence. We must rediscover the bonds of love and loyalty that bring us together as Americans.

“Racism is evil. And those who cause violence in its name are criminals and thugs, including the KKK, neo-Nazis, white supremacists, and other hate groups that are repugnant to everything we hold dear as Americans. We are a nation founded on the truth that all of us are created equal. We are equal in the eyes of our Creator. We are equal under the law. And we are equal under our Constitution. Those who spread violence in the name of bigotry strike at the very core of America.”

A day later, when the media continued its questioning, Trump reiterated what he’d said, while adding there were “very fine people” on both sides of the Charlottesville protest over removing historic statues, including “people that went because they felt very strongly about the monument to Robert E. Lee—a great general, whether you like it or not.” He went on to explicitly state that “very fine people” didn’t refer to racists.

“I’m not talking about the neo-Nazis and the white nationalists, because they should be condemned totally,” said Trump, using the magic word “condemned,” as if that might satisfy his critics this time. It didn’t.

To this day, many falsely report that Trump referred to neo-Nazis and racists as “very fine people.” But even left-leaning factcheck.org takes Trump’s side on that point, stating that “Trump has condemned white supremacists” and that Biden is incorrect when he claims Trump hasn’t done so.

Still hounded by the press in September 2017, Trump issued another statement opposing bigotry in all forms: “No matter the color of our skin or our ethnic heritage, we all live under the same laws, we all salute the same great flag, and we are all made by the same almighty God.”

At a White House briefing on Aug. 5, 2019, after two mass shootings, including one in El Paso, Texas, Trump said, “The shooter in El Paso posted a manifesto online consumed by racist hate. In one voice, our nation must condemn racism, bigotry, and white supremacy. These sinister ideologies must be defeated. Hate has no place in America. Hatred warps the mind, ravages the heart, and devours the soul. We have asked the FBI to identify all further resources they need to investigate and disrupt hate crimes and domestic terrorism—whatever they need.”

That prompted a perfectly accurate headline in The New York Times on Aug. 6, 2016: “Trump Urges Unity vs. Racism.” Indeed, Trump had done just that.

But shortly after publication, several prominent Democrats argued that The New York Times shouldn’t have printed what Trump said; they claim the newspaper should have concluded that what Trump said wasn’t what he actually meant. Buckling under the critiques, New York Times executive editor Dean Baquet changed the headline to “Assailing Hate but Not Guns.”

In April, the Trump administration designated a Russian white supremacist group as a terrorist organization.

Then, in the first presidential debate against Joe Biden, the cycle started again. The media cried foul when moderator Chris Wallace asked Trump to again disavow white supremacy—without noting that he’d ever done so. When Trump answered, “Sure, name the group,” inviting Wallace to script exactly what should be said to satisfy him, Wallace demurred. Trump’s enemies and some in the media then cited the exchange as proof-positive of Trump’s racist feelings.

And so the question was raised at the next White House briefing, at which press secretary Kayleigh McEnany pointed to the president’s explicit condemnations of white supremacy. Some in the media then claimed her answer as further evidence of a dodge.

Finally, on Oct. 1, Trump stated in an interview and wrote on Twitter: “I’ve said it many times and let me be clear again: I condemn the KKK, I condemn all white supremacists, I condemn the Proud Boys [a group the media had asked about].”

The example makes clear that disavowal in today’s media environment often doesn’t do the trick. Demanding condemnation has become a tactic used to tar the politician with the negative behavior he’s supposed to condemn.

Sharyl Attkisson (@SharylAttkisson) is an Emmy-winning investigative journalist, author of the upcoming “Slanted: How the News Media Taught Us to Love Censorship and Hate Journalism” and the New York Times bestsellers “The Smear” and “Stonewalled,” and managing editor of Sinclair’s Sunday TV program “Full Measure.”