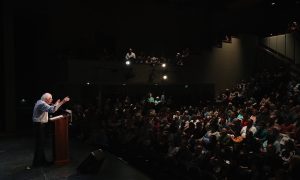 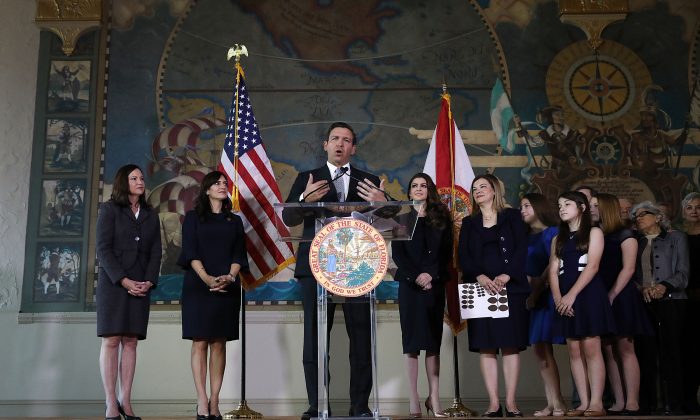 Newly sworn-in Gov. Ron DeSantis announces Barbara Lagoa (2nd to the right of him) as his choice to be seated on the Florida Supreme Court during an event at the Freedom Tower on January 09, 2019 in Miami, Florida. Joe Raedle/Getty Images
Viewpoints

During the midterm elections, Florida voters approved Amendment 4, which restored voting rights for people convicted of felonies as long as they have completed their sentences.

The amendment—which doesn’t apply to people convicted of murder or felony sex offenses—passed with 64 percent of the vote and took effect on Jan. 8.

After Amendment 4 was passed, Gov. Ron DeSantis signed legislation effective on July 1 that specifies that in order to “complete their sentences,” felons must pay all fines and fees before their voting rights are restored.

This new law didn’t sit well with voting and civil rights groups, who objected to compelling felons to pay all fines and fees before their voting rights were restored. They subsequently filed suit in federal court, claiming, in part, that the “payment” requirement “unconstitutionally denies the right to vote to returning citizens with a past felony conviction based solely on their inability to pay” such fines. Moreover, Amendment 4, they argued, provided for the automatic restoration of voting rights and didn’t mandate any payments.

As a result, DeSantis asked the Florida Supreme Court to provide an advisory opinion on the issue, to which the court agreed. According to the Associated Press, DeSantis asked the court to provide guidance as to whether the phrase “completion of all terms of sentence” in Amendment 4 encompasses “fines, fees, restitution, and other financial obligations imposed in a sentencing order.” He did not ask the court to rule on the constitutionality of the new law.

Opponents to this requirement reference new research that the “payment” requirement would prevent the majority of people who have felony convictions from voting. Additionally, they allege that the ballot language and the specific language of Amendment 4 are both silent as to the issue of payment.

On the other hand, DeSantis makes several compelling points and asserts that voters knew that felons had to pay all fines and fees in order to “complete their sentences” and to have their voting rights restored.

As reported in the Florida Phoenix:

“In his request, DeSantis notes what advocates for the law said when they pushed to include the provision during the 2019 session earlier this year. Those advocates acknowledged to the Florida Supreme Court, a year before Floridians voted on the issue, that completion of all terms of a sentence included full payment of any outstanding fees. For a citizen-led constitutional amendment to qualify to get on the ballot in Florida, organizers need to collect more than 760,000 signatures statewide, as well as go before the state Supreme Court to have the ballot language reviewed.

“For Amendment 4, that court review happened in March 2017. As DeSantis notes in his written request, members of the Florida Supreme Court asked the attorney representing Amendment 4 if completion of a sentence meant including the payment of all fines, fees and restitution.

“’Yes, sir. All terms mean all terms within the four corners,’ attorney Jon Mills replied to Justice Ricky Polston, according to a transcript.”

The Florida Supreme Court will hear oral arguments on this important question in November.

The political ramifications associated with the court’s decision are also worth noting. As a result of Amendment 4, about 1.4 million people will be granted the right to vote in Florida elections, and many are likely to vote for Democrats.

According to a 2014 article in BizPac Review, “A new study published in a leading political science journal confirms yet again what any observer of American politics knows instinctively: Felons who are allowed to vote overwhelmingly favor Democrats—6 to 1 in the states studied.”

A similar conclusion was discussed in the Tampa Bay Times in November 2018.

However, if the Florida Supreme Court issues an opinion that is in line with the governor’s interpretation, meaning that payment is necessary, the effects could be significant.

For example, in his expert report filed on behalf of the plaintiffs, Daniel A. Smith, professor and chairman of the department of political science at the University of Florida, made the following conclusion regarding Senate Bill 7066 (the law in question) and those with outstanding legal financial obligations (LFOs):

Based on these findings, many people could be ineligible/unable to vote if forced to pay their outstanding legal obligations, which could hurt Democrats more than Republicans. This is especially true in Florida, where elections have historically been very close.

For example, as reported in the Miami Herald: “Rick Scott beat Alex Sink for governor eight years ago by a mere 61,550 votes. Four years ago, Scott won reelection over Charlie Crist by 64,145 votes. Donald Trump won Florida over Hillary Clinton two years ago by 112,911 votes, securing him the presidency.”

As is evident, the Supreme Court’s advisory opinion is very important. Given the historically tight races in this vital swing state, the court’s opinion, while not legally binding, could help to shape the balance of power on the local and national level.

As the old saying goes, as Florida goes, so goes the nation.