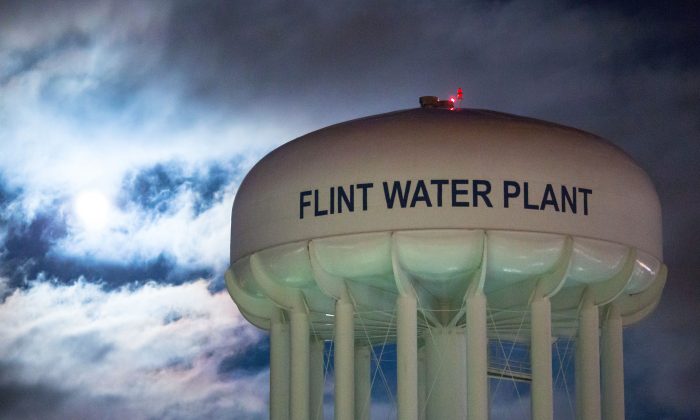 The City of Flint Water Plant in Flint, Mich., on Jan. 23, 2016. A federal state of emergency has been declared in Flint due to dangerous levels of lead contamination in the water supply. (Photo by Brett Carlsen/Getty Images)
US

The Flint Water Crisis, a Year On

LANSING, Mich.—A year after the tap water in Flint was exposed as a source of dangerous levels of lead, residents of the impoverished city are still grappling with the man-made public health crisis, which has led to criminal charges and drawn attention in the presidential election.

The United States of Flint

Doctors discovered high amounts of the toxin in children last September and warned against using the Flint River water. Local health officials declared an emergency and Republican Gov. Rick Snyder confirmed there were “serious issues” after state officials downplayed concerns despite other problems with the municipal water.

In addition to the criminal investigations, the crisis has sparked congressional hearings, lawsuits and scrutiny of lead testing across the country. Here’s where things stand today:

Is the Water Safe?

Flint, whose water source was switched in 2014 to save money while the city was under state emergency management, returned to a Detroit-area water system in October. But Flint’s 99,000 residents still can’t drink the water without a filter until the system has been made safe with corrosion-reducing phosphates, a critical step that was missing when Flint used the river for 18 months. The state is still distributing filters and bottled water at spots throughout Flint. The state health agency says the decision on whether to shower or bathe with city water “is an individual one.”

Is the End in Sight?

The water quality has improved, yet when it will be deemed OK to drink unfiltered is unclear. Another round of testing will be completed in early October. It’s also unknown when Flint will receive water from a new regional pipeline that is to draw water from Lake Huron. Lifelong resident Luke Waid said he remains so stressed about lead detected in his 3-year-old daughter, Sophia, that he had to leave his welding job at an aerospace manufacturer. “I’d get working and all I can think about is, ‘Is she OK?'” he said. “It gets to be such a burden. I didn’t want to leave her.” Before the crisis exploded, Waid, 31, and his fiancee, Michelle Rodriguez, feared losing custody because of her lead levels, which they worry cause Sophia’s symptoms such as irritability. Waid said it’s hard to keep a “positive mind frame,” not only for his daughter but much of anything.

What About the Pipes?

One source of the contamination was old lead pipes that leached the toxin into homes and businesses. Flint plans to replace thousands of the underground lead and galvanized steel service lines with an initial $27 million in state funds. But progress has been slow. Just 177 of what could be at least 10,000 lines had been replaced as of Friday.

The Republican governor, who apologized for his administration’s failures that created and prolonged the crisis, has seen his approval rating plummet but has rejected calls to resign. The state’s former epidemiologist and Flint’s suspended utilities administrator struck plea deals. Criminal cases for seven other current or former state environmental or health employees continue amid accusations of a cover-up. Michigan Attorney General Bill Schuette has hinted that charges against higher-ranking officials may follow. He also has sued two water engineering companies for negligence.

The state has allocated $234 million to provide water bill credits and other assistance, such as additional school nurses, healthy food to reduce lead poisoning risks and psychotherapy sessions. Much has yet to be spent. The Republican-led Congress is at odds over Democrats’ calls for $220 million to help Flint and other cities replace pipes and clean their water. The Community Foundation of Greater Flint has received more than $12 million in private donations to respond to the crisis.

Waid and other residents have filed lawsuits seeking compensation. The cases are in the early stages. A federal judge currently is considering a request by residents, pastors and national advocacy groups to order the regular delivery of bottled water to all Flint homes unless a household opts out. The plaintiffs say lead levels haven’t been minimized and response efforts by the state and city “have not alleviated the exhausting struggle many in Flint face in trying to find alternative sources of safe drinking water.”

National attention on Flint has dissipated since Snyder and President Barack Obama issued emergency declarations in January and Democrats campaigned there and later met in the city for a March presidential primary debate. But Republican Donald Trump, who wants a good showing in the industrial Midwest, visited in mid-September amid his increased outreach to African-Americans only to be cut short after criticizing Hillary Clinton in a church. Clinton’s daughter, Chelsea, visited Friday for a briefing.

The U.S. Environmental Protection Agency plans to release new regulations next year to strengthen its lead rules. While Michigan is spending money, it has been much slower in enacting major policy reforms. Snyder has implemented or referred many of his task force’s 44 recommendations, yet no significant legislative action is expected until 2017. The governor has proposed the nation’s toughest lead-testing rules and the replacement of all underground lead service pipes in Michigan, among other proposals. Democrats are pushing to repeal or amend the emergency manager law, which was blamed as a factor in the crisis.