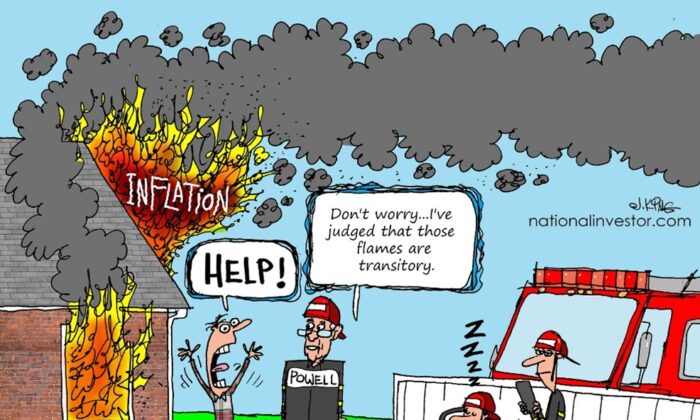 “We tend to use [transitory] to mean that it won’t leave a permanent mark in the form of higher inflation,” Fed Chairman Jerome Powell said during a congressional hearing in December 2021.
Viewpoints

The Flation Debate: A ‘Hawkish’ Update?

The Federal Open Market Committee has just commenced its latest meeting to set monetary policy. Everyone, their dog, and even the fleas on those dogs expect the central bank to notably ratchet up their inflation-fighting efforts come May 4 around 2:00 p.m. ET.

Specifically, this will come in the form of 1) a 50-basis point (half a percent) increase in benchmark short-term interest rates and 2) more color on just how quickly the Federal Reserve will begin selling assets from its uber-bloated balance sheet. On that latter, expectations are that the central bank will be net sellers of nearly $100 billion/month between mortgage securities and Treasury paper. All else being equal, this will be designed to further crimp lending (which, at least for home mortgages, finally has slowed abruptly, even if housing prices themselves in most places remain high) and take some of the inflationary steam out of the system.

Of course, we would never be in this predicament in the first place had the Fed—led by the Arthur Burns of our time, Jerome Powell—not as a first matter gone so nutso with money printing over the last couple of years. Burns made consumer and producer price increases back in the 1970s worse than they would have otherwise been by printing too much money and keeping rates too low; ostensibly to help “cushion the economy,” first off, from the Arab oil embargo and its effects. The oil wasn’t coming anyway, no matter what Burns did. So all he succeeded in doing was driving its price up even further with his cheap money policy (and prices for everything else as well.)

Obviously, Powell did not learn from this history; nor did anyone around him and/or his legions of apologists. “Cargo Plane Jay” went far beyond the past money printing antics of “Helicopter Ben” Bernanke, Burns, that mad monetary scientist Alan Greenspan (who never met an unregulated derivative he didn’t like), and the rest. Indeed, in scarcely more than two years, the Powell-led Fed created some 30 percent of the total dollars ever brought into existence!

Powell’s justification was to “cushion” us from the self-imposed deep—but short—recession in the wake of the Wuhan virus-caused lockdowns and such. But, like Burns, he made all this far worse by raising the prices of most everything by flooding the system with too many dollars.

So—not without some justification—markets and pundits alike (and the average American consumer reeling under the consequences of Powell’s disastrous policy) now look to the arsonist and wonder how eager a fireman he’s now going to be. Some of the more simplistic analyses are comparing him to another former Fed Chairman, Paul Volcker, who belatedly was brought into the picture to put out Burns’s inflationary inferno of the 1970s. Back then, at least Volcker started with a clean slate. It remains to be seen whether Powell has either the ability or the will—or will be allowed by circumstances—to clean up his own mess.

One of the issues today that confuses this whole “flation” thing—let alone the “mix” of said factors we are in store for in the months and years ahead—is the fact that the average pundit or economist does not understand the genesis of inflation in the first place. This is one reason, of course, that a President Joe Biden can even try and sell his malarkey to the public that all this inflation raging out there is the fault of Russian President Vladimir Putin. He, for one, will never acknowledge that the primary cause of rising prices for everything is the arsonist he just gave a second Fed term to.

As I have previously explained here, the mess Powell has made for all of us is courtesy of his overextending even more the asset inflation regimen created by Volcker in that previous Fed chairman’s “second act.” Much more so, Powell’s wildly inflationary policy of the last couple years especially has already given us hyperinflation: in asset valuations of all manner.

The question now is whether/when—in trying to undo some of this disaster—Powell pushes us back to the other extreme and inflated asset classes deflate sharply. I will predict to you that—long before the still-liquid U.S. economy grinds down into a recession because of modestly tighter monetary conditions—the Fed’s rate hikes, rising market interest rates, and now a near-20 year high in the U.S. dollar will cause a deflationary implosion in the markets. While all the moving parts and pieces may not be quite the same, the pattern of such a thing will be the same as back in 2008: a rapid, gut-punch reversal into some deflation in markets that will, in turn, drag down the economy into a worse recession than we are already in store for.

But this time around—unlike 2008—we have a number of now-systemic factors baked into the cake that will not uniformly lead to lower prices, even if demand gets hit somewhat in a new global recession. Ominously, the new global currency and commodity wars now unfolding—made worse by the Russia-Ukraine war and the generally counterproductive sanctions regimen enacted by the “West” (read—war-mongering United States-led NATO)—will be making this worse. And because of abysmal U.S. policy decisions, the cost to our nation especially of all manner of materials needed for the coming “Green economy” will stay in the stratosphere for some time to come, together with conventional energy.

So while I never would have said this even a year ago, brace yourselves for a considerably worse “stagflation” than what we all endured a generation ago. Don’t be surprised when stocks lose another 20–30 percent or so … the economy is more firmly in recession… but the cost of living is still rising much nearer to 10 percent than Powell’s obliterated target of 2 percent.