Joe Biden Is Lying About His Income, His Tax Dodging, and His Tax Increases
0
Share Now
FacebookTweetParlerEmail
Copy Link 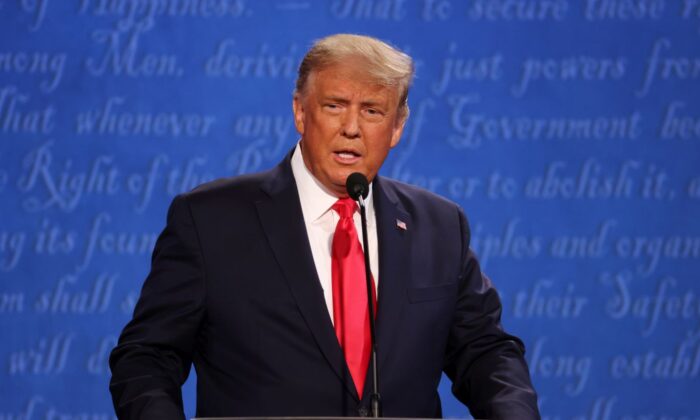 Elections are about choices. When it comes to the presidency, the choice is between two people and the policies they likely will pursue. In 2020, I am choosing to vote for the reelection of President Trump and here are the most important reasons why.

Before I list those reasons, I note that four years ago, I wanted three things out of a Trump presidency. First, I wanted him to enact tax and regulatory reform so that the economy could grow beyond the average of 2 percent a year in growth that was the result of years of too much growth in government spending and regulations. Keep in mind, the higher spending and regulation is as a percentage of the economy, the lower economic growth becomes.

Second, I wanted him to keep us safe. I wanted a strong national defense that wouldn’t appease Iran and Russia.

Finally, I wanted President Trump to appoint Judges that would NOT be judicial activists. I wanted the Constitution to be preserved.

So, here are the reasons I will vote to reelect President Trump.

Trump Kept His Promises and Is Always Pushing Ahead. Trump promised to do those three things above and, lo and behold, he kept his promises. Indeed, Trump has kept more promises than any President in modern times. He literally shows up to work and demands that progress be made regardless of the time of year or election cycle. Hence, taking on North Korea in an Election year (2018) and Middle East Peace in 2020.

The World Is Safer Now. The progress made in Middle East Peace is historic and meaningful. The failed policies of the last 25 years focused on appeasing Iran and the Palestinians. In the nuclear/terror age, that left Israel militarily insecure and wondering what neighbors were a risk and funding terror. Worse yet, Obama/Biden gave Iran money and thereby threatened Israel without resulting in peace.

All combined, it was a set of policies that was always doomed to fail and risked international war.

Enter President Trump. He abandoned those policies, stood by Israel and defunded Iran with sanctions. With a weakened Iran, its influence waned. Trump then approached the reasonable Middle East countries and brokered deals between them and Israel. As a result, Israel now has fewer hostile neighbors, is more secure and can even consider better relations with Palestinians knowing they are more secure.

As a result of the Trump policies, the world has a calmer Middle East that has real prospects for prolonged peace. There is no way to understate the importance of that.

Joe Biden, on the other hand, would reverse that success by opening up Iran again with another Obama/Biden style deal. Biden would also cripple U.S. energy production. Combined, the Biden polices would enrich Iran and allow it once again to endanger the Middle East if not the world.

That alone is worth voting for the reelection of President Trump.

Trump Will Preside Over a Boom While Biden’s Economic Policies Would Push Us Into a Depression. Joe Biden wants to institute the largest tax increase in American history. He wants to cripple the energy industry, and he would strangle the economy with regulations. All of that, as I have written with economist Stephen Moore, would push America into a depression.

President Trump, on the other hand, instituted economic reforms that allowed the economy to flourish. If we stay that course, the economy will boom back and people will get jobs. That’s what I care about. People getting jobs and taking charge of their own lives. That is the American dream.

That, too, is why I am voting for President Trump.

Kamala Harris Cannot Be President. As someone who ran against Kamala Harris in 2016 for U.S. Senate, and beat her in a post-debate poll, she should not be President. She is not a serious person—she is reckless and unprincipled.

Her policies would also usher in socialism—plain and simple. She wants government healthcare, huge tax increases, and the ending of fracking/oil industry. She undoubtedly would support packing the Supreme Court and ending the Electoral College.

Her views matter because Joe Biden’s health is more than suspect and that would mean a President Harris. No thank you.

Either You Support Moving Toward Socialism or You Demand Moving Away From It. In final analysis, either you understand that socialism does not work or you have not studied history. My litmus test is whether a candidate understands that basic law of history. Supporting larger government on the magnitude of Biden and Harris could not be more wrong.

Oh, and one bonus reason. I like a patriotic President. I don’t like politicians who tear us down at every turn and tell us, falsely, that we are systematically bad. Yes, we can improve and must on numerous issues including race. On the other hand, we are not a bad nation.

So please join me and vote for prosperity for all. Vote Trump.