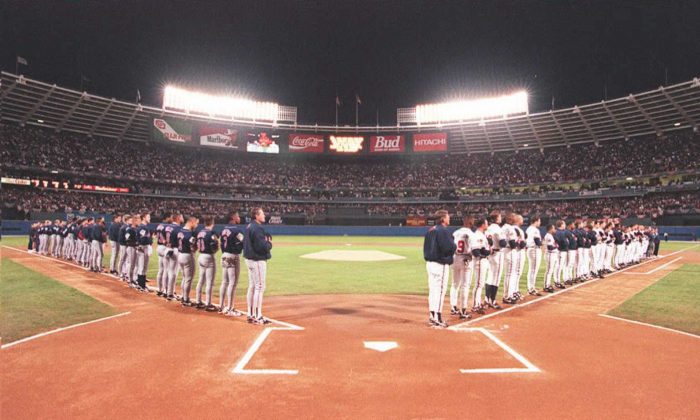 With the 2013 World Series still ahead of us and lots of anticipation and some angst in the air, the first World Series in an earlier and more innocent time in the history of baseball, seems a wordy topic to reflect on. It is especially relevant for your loyal scribe who is still hard at work on a mainly oral history

Back in the 1880s for a period of seven years there had been playoffs between National League and American Association champs. Once, the playoffs went to 15 games—1887 between St. Louis and Detroit.

In 1903, Pittsburgh won its third straight National League pennant and Boston won the brand new American League title by 14 l/2 games over the Philadelphia Athletics. The Pirates bragged about Honus Wagner whose .355 average earned him the batting title as well as its two 20-game winners Deacon Phillippe and Sam Leever. Their swashbuckling manager Fred Clarke was runner-up with a .351 average.

The first modern World Series came about at the suggestion of Boston owner Henry J. Killilea and Pittsburgh’s owner Barney Dreyfuss. It was called “Championship of the United States,” a five of nine games affair. The matchup was a voluntary agreement between the two clubs not the leagues.

On October l, 1903 the first game was played at Boston’s Huntington Avenue Baseball Grounds before 16,242, quite a turnout underscoring the appeal of the “first World Series.” Each team provided one umpire. Hank O’Day represented the National League while Tommy Connolly was the American League choice.

Right-hander Deacon Phillippe, age 31, winner of 25 game in 1903, matched up against Boston’s Cy Young, who had won 28 games that season and was in the 14th season of a legendary 22-year career.

The Pirates jumped all over Young in the first inning. After their first two hitters, Ginger Beaumont and Clarke, made easy outs, Tommy Leach tripled. Then the great Honus Wagner singled him in for the first run in World Series history. An error by Boston second baseman Hobe Ferris on Kitty Bransfield’s ground ball prolonged the inning. The all hell broke loose. Boston catcher Lou Criger would commit two more errors; the Pirates would steal three bases. And by the time pitcher Phillippe struck out ending the inning, the American Leaguers were in a 4-0 hole. Pittsburgh won the game, 7-3 victor.

Throughout the game and the series Boston’s rabid fans serenaded Pittsburgh players with a popular song of the day, “Tessie.” Moreover, they substituted their own vulgar words for the regular lyrics. “It was that da– song that caused us problems,” grumbled Buc player Tommy Leach.

Deacon Phillippe won three of the first four games of the series for Pittsburgh but then faltered. Boston then swept the last four games. Bill Dinneen and Cy Young accounted for all five Boston victories.

On October 13, only 7,455 showed up – the smallest crowd of that first “Fall Classic.” Phillippe pitched his fifth complete game of the series but lost, 3-0 to Dinneen. Boston had the championship.

Right after the game ended players from both clubs lined up for a combination team photo. That surprised many and was a remarkable display of good sportsmanship considering the bitterness that had existed between the junior American League and the senior National League.

Deacon Phillippe made out very well. He was heroic in his efforts in the series with five decisions in 44 innings pitched, still World Series records. His reward—a bonus and 10 shares of stock in the Pirates.

An oddity of the World Series was that the losing players received more money that than the winners. Buc Owner Dreyfuss put his club’s share of the gate receipts into the players’ pool. Each Pittsburgh player netted $1,316 while each Boston player netted $1,182.

That first Fall Classic was a far cry from the way the competition has evolved. Nevertheless, it triggered all that has taken place through these many decades.