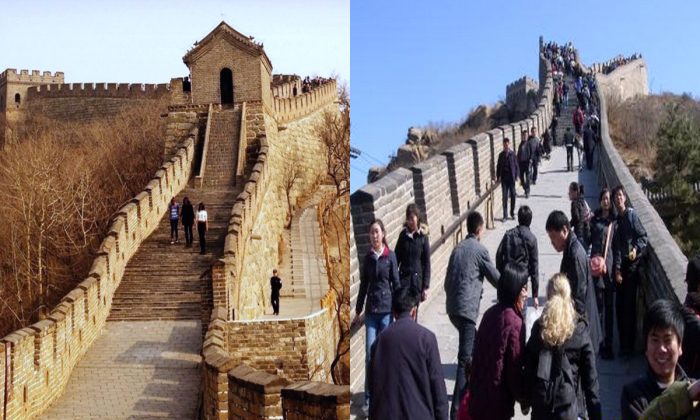 Michelle Obama and her daughters (L) visit the Great Wall in Beijing on March 23, after the crowds of tourists were cleared away. On the right is how the Great Wall normally looks in tourist season. (Chen Linsen & Sina.com)
China

There were three things that Chinese propaganda authorities demanded could not be reported during the stay of first lady Michelle Obama in China, from March 21–26. Only one of them seems to have made sense.

That was simple: no reporting on the “clearing” of the Great Wall during her visit. This is because police came out in force to make sure that wherever Mrs. Obama went, the popular tourist attraction was devoid of other people.

“Where did the tourists go?” Chinese Internet users asked, after pictures of Mrs. Obama and her two daughters roaming over the empty embattlement were posted online.

Too much commentary on this scene could have opened the Communist Party up to nationalist criticism, as it rid a Chinese attraction of Chinese tourists to make way for a visiting American dignitary.

The measures were taken “to fawn on Mrs. Obama,” said Hu Ping, chief editor of the Beijing Spring magazine, in a telephone interview.

“It also shows how normal Chinese people’s rights were deprived, and how powerless they are. Such a thing is hard to imagine in democratic countries. Democratic countries would add a certain level of security to protect very important people, but it’s not possible to obstruct tourists normal visiting,” he said.

The two other items that were marked as restricted in Chinese media reports related to the meal receipt for one of the Obama’s family feasts, and the unstylish school uniforms worn by students at a school that Mrs. Obama visited.

China Digital Times, a website focused on the Chinese Internet and censorship, reported the directives as part of its “Ministry of Truth” column, which are based on reports received from Chinese journalists. Propaganda officials regularly transmit censorship directives to media workers across China, guiding coverage they find undesirable.

But in this case, it was unclear how discussion of a simple meal and school uniforms would be terribly damaging.

The first was a meal that Mrs. Obama’s family enjoyed at a Peking Duck restaurant on March 22. Chinese news articles posted a meal receipt online purporting to be from Mrs. Obama, listing 17 dishes, which they said was “luxurious” and “wasteful.”

A day earlier, Mrs. Obama had visited a middle school in Beijing, and was photographed with two students who were wearing what Internet users described as “unbearably ugly” school uniforms. The uniforms—blue and white tracksuit ensembles—have not been altered for decades in China.

Though these two items seemed to be amusing to Chinese Internet users on social media, propaganda authorities sought to neutralize the discussion with the directive.

“The Communist Party wants to hide a lot of things because of its inner fears, so it filters information constantly. Sometimes its orders are just stupid,” Hu Ping said. “It even tries to cover up things that are not really meaningful or necessary to hide.”

There was probably one incident that the authorities had good reason to censor coverage of, though: the apparent beating of a tour guide who defied the orders of a security guard at Emperor Qinshihuang’s Mausoleum, where the Terracotta Warriors are located in Xi’an, Shaanxi Province.

Mrs. Obama visited that site with her daughters on March 24.

A Chinese netizen posted pictures out on the Internet purporting to show a tourist guide lying unconscious on the ground, after being knocked over and kicked in the head by a security guard who was attempting to clear the scene for the first lady’s tour.

“For receiving Mrs. Obama, security asked this tour guide to get out. The guide said he would go soon, but he was kicked over by this special police officer,” wrote the Internet user, who claimed to be the colleague of the tourist guide. “The tourists were angry. The police then took the guide away to avoid tourists taking pictures. We don’t know where he’s been taken!”

Another Internet user, who identified him or herself as a tourist, and used the handle @Ziyedetan, said he witnessed the scene. “We paid the ticket. Why do we have to leave? Now they hit the tourist guide like that!”

The information sparked discussion among Internet users, but the information was purged from certain websites, and Chinese media has not reported investigations on the case.

Other, more predictable topics have also been largely either off limits or relegated to a tertiary place in Chinese press reports. These include Mrs. Obama’s remarks about freedom of speech, religion, and the Internet in her speech at Peking University in Beijing on March 21. On March 25 she also referred to human rights, in a speech at a middle school in Chengdu, in southern China’s Sichuan Province.