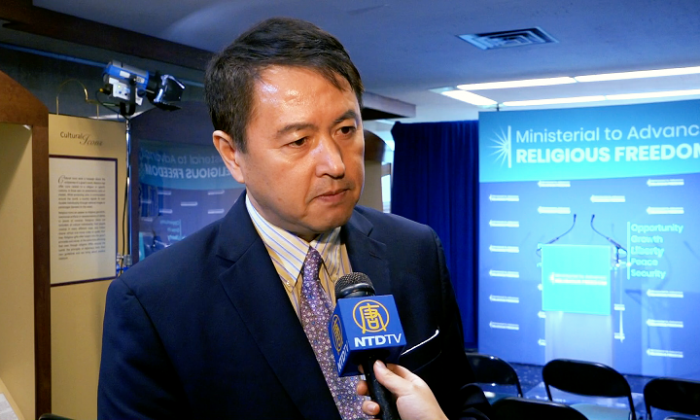 Zhang Erping, spokesperson for Falun Gong, at the Ministerial to Advance Religious Freedom on July 24 in Washington. (Wu Wei/NTD)
US News

The First Ever Ministerial to Advance Religious Freedom Inspires Hope

WASHINGTON—The first ever U.S. Ministerial to Advance Religious Freedom officially launched at the State Department in Washington on July 24, with more than 40 foreign ministers and representatives from 80 countries attending.

In his opening remarks, U.S. Ambassador-at-Large for International Religious Freedom Sam Brownback said, “We must commit to using all the might, the machinery, and the moral authority we have to stop those nations and actors who trample on free souls. ”

Writing about the goal of the ministerial in an op-ed published by USA Today, Secretary of State Michael Pompeo said that “religious freedom is a God-given right to which all people are entitled.”

“We need governments to recognize religious discrimination and persecution, take a firm stand against it, and treat religious freedom as a foreign policy priority,” Pompeo said.

Zhang Erping, representative of the spiritual discipline Falun Gong, said he felt encouraged by seeing religious freedom discussed at a ministerial level for the first time. He hopes that international condemnation can do more to end the persecution of the practice in China, which has lasted for more than 19 years.

“We hope that the international world, all democratic countries, NGOs that care about religious freedom, can openly condemn the Chinese Communist Party’s persecution of Falun Gong. Private dialogues have been proven to be a failure,” Zhang said.

Zhang also hopes that, based on the Magnitsky Act, the U.S. government can impose legal actions against human rights abusers in China, including freezing their assets, denying entrance to the United States, or suing them if they enter the country.

The Ministerial to Advance Religious Freedom will last until July 26, with a wide range of events scheduled for the same period.