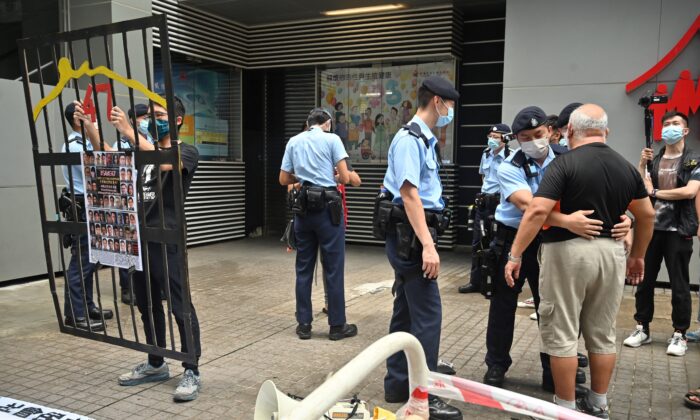 A protester (right) is searched by police as Hong Kong began selecting a powerful committee under a new "patriots only" system imposed by Beijing, in Hong Kong, on Sept. 19, 2021. (Peter Parks/AFP via Getty Images)
Thinking About China

The upcoming legislative election in Hong Kong will be the first one held since the enactment of the national security law (NSL) and the reconstruction of the electoral system, which will effectively bar pro-democracy lawmakers from getting elected.

The new electoral system has several mechanisms that will ensure that the opposition will never be able to get close to any public offices, according to Xia Baolong, director of the Hong Kong and Macau Affairs Office.

Foremost is the installation of a political vetting system. Anyone who wants to take part in the election must be first vetted by a committee, the Candidate Eligibility Review Committee (CERC), headed by the chief secretary who was formerly chief of police. Members of CERC include the incumbent police chief and the head of the national security branch of the police force.

The CERC will judge each potential candidate to decide whether he or she has “enough love” for China and Hong Kong. Since this is a highly subjective criteria, the authorities devised a system to categorize a candidate’s response by comparing it to a positive and a negative list, based on loyalty to Beijing.

There was no political vetting in previous elections. The Basic Law only requires demographic criteria, which are objective and could easily be verified.

After the first hurdle, one must secure enough nomination from an Election Committee (EC) to qualify for formal candidature. Since the EC is made up entirely of Beijing loyalists, it is next to impossible to get sufficient nomination from the committee.

For example, barrister Ronny Tong Ka-wah complained that members from his Path of Democracy party couldn’t get enough EC nominations required for formal candidature. Consider that Tong himself renounced his Civic Party membership, switched allegiance to Beijing, and as a result was appointed by Chief Executive Carrie Lam to her Executive Council, his previous stint with the Civic Party, an advocate for democracy, is still a burden for his new party. So there’s no way for someone like Tong to get any support from the EC.

In the past, candidates running for legislative seats need only to get sufficient nominations from the general public to qualify for candidature. Now the EC has become their second hurdle. Under the Basic Law, the EC was only responsible for the election of the chief executive, and its terms of reference do not include the Legislative Council (LegCo) election. Under the new system, the EC has turned into one of the gatekeepers.

Before the revamp of the system, the LegCo was comprised of 70 seats, with geographic and functional seats each occupying 35. Under the revamped system, the total number of seats has expanded to 90, with the creation of a new category of seats assigned to the EC. The newly constructed legislature will consist of 40 seats for the EC, 30 for the functional constituencies, and 20 for geographic seats.

Thus, the share of direct election is reduced from the previous 50 percent to 22 percent, whereas the indirect ones increased from 50 percent to 78 percent. Since the newly created EC constituency is mostly composed of Beijing loyalists, the Chinese regime is content that the legislature is firmly under its control.

After all these manipulations, among the total of 154 candidates taking part in the Dec. 19 race, 113 are Beijing loyalists.

Second, the definition of universal suffrage is distorted under the new system. At the time when the Basic Law was drafted, the drafters from mainland China and Hong Kong have debated the meaning of universal suffrage on three occasions—when the term was raised in relation to the election of the chief executive and of the LegCo (Articles 45 and 68, respectively), and when the Basic Law was about to be finalized. It was the consensus among them that the term refers to both the right to elect and to be elected. Now, under the new system with political screening, citizens are deprived of their rights to stand for election (or run for office).

Third, under the Basic Law, Hong Kong will not practice socialism. Yet the new election system created one that resembles Beijing’s, where every candidate who stands for election must be pre-approved by the CCP to ensure that there would be no surprises in the outcome. Hong Kong’s new system represents the communist way of “electing” people.

Lastly, the new system is a complete distortion of the political vision of former Chinese leader Deng Xiaoping when he first crafted the “one country, two systems” model. Deng stipulated that those who run Hong Kong must be patriots—those who respect their own nation, support the resumption of sovereignty of Hong Kong, and don’t jeopardize the prosperity and stability of the city. Now the new definition includes support for the CCP and for socialism/communism. This is a much more restrictive definition that excludes those who support democracy.

Besides, the Hong Kong government that Deng envisaged would be one consisting of leftists (in the local context, this refers to Beijing-loyalists), rightists (this refers to the pan-democrats), and with the vast majority being centralists. Now, under the new election system, only Beijing loyalists could stand for election.

Thus, the upcoming election in Hong Kong will create the first Legislative Council that resembles the National People’s Congress in China: a rubber-stamp legislature packed with yes-men.