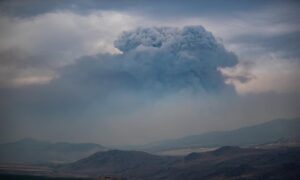 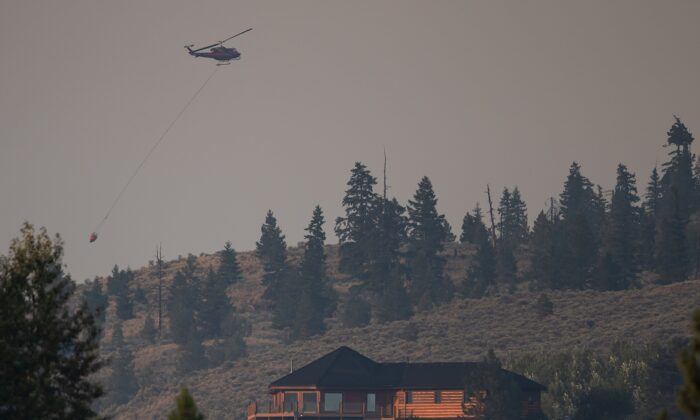 A helicopter carrying a bucket flies over a property in Barnes Lake while battling the Tremont Creek wildfire near Ashcroft, B.C., on July 15, 2021. (The Canadian Press/Darryl Dyck)
Canada

‘The Fire’s Gotten So Huge’: BC Residents Voice Frustration With Wildfire Response

As wildfires continue to rage across B.C., some residents whose livelihoods are imperilled by the fires say there’s much to be desired in how authorities are tackling the emergency.

Premier John Horgan called a state of emergency on July 21. Firefighters have been working to stop more than 250 out-of-control wildfires burning across the Interior, while many residents remain on evacuation alert.

On July 27, the BC Wildfire Service (BCWS) reported that there have been 227 active wildfires larger than 0.009 hectares in the province since June 16, including the 12,500-hectare White Rock Lake fire bearing down on the small community of Monte Lake in the Okanagan.

Resident Camille Staples told The Epoch Times that the face of the fire—discovered on July 13—was 35 kilometres wide as of July 26 and “spreading in multiple directions,” including north toward Monte Lake, where she lives.

“This year the fire’s gotten so huge and there was really no action on it until [local forestry company] Tolko took over and put all their resources on it, which are these contractors, the loggers, to build fireguards,” said Staples, who along with her husband owns a small trucking and heavy equipment business that has been helping to fight the fires.

Staples said her company’s contribution of equipment and manpower is small compared to that of larger operators “out there with half-a-million-dollar machines.” Several pieces of the big operators’ equipment had to be abandoned in the bush on July 25 after “the fire just took off,” she said.

She says local resources seconded to fight the fire are being mismanaged.

“Our guys are coming back in the night after really, really long days, and they’ve been frustrated all week because there’s conflicts of bosses telling them to go this way or go that way, telling guys that know these machines to plough fireguards uphill. And just none of that makes any sense, so they’re not feeling that they’re very effective.”

Fireguards are wide pathways that have been stripped of vegetation by bulldozers to create gaps intended to starve wildfires of fuel in order to slow the fire and protect infrastructure on the other side.

Staples said that in addition to fighting the fire with local machinery and manpower, ranchers are also working to secure cattle while the stench of cows that have perished hangs in the air.

The BCWS has classified the White Rock Lake fire as “out of control,” and the nearby communities have been on evacuation alert since July 26, while 139 firefighters, 35 heavy equipment pieces, and six helicopters were available to suppress the blaze.

Mike McCulley, BCWS fire information officer at the Penticton command post in southern B.C., told The Epoch Times that he’s “pretty aware of the frustration” and backed decisions made by BCWS personnel on the ground working with Tolko contractors since July 14.

“Our crews and our operational staff that are out on the line are highly trained professionals in wildfire management. They make these types of decisions regularly, which includes directing equipment,” he said. “[They’re] extremely well-trained and competent.”

McCulley said he was “not aware of any equipment being lost.”

“Our top priority always is the safety of the responders on the fire, and that includes equipment operators, firefighters, and leadership staff,” he said. “These fires can pick up and move in a very aggressive manner very quickly and cover quite large distances.”

‘Small Fires Have an Urgency’

George Benwell lives in Revelstoke and spent his career fighting fires in B.C. and training others to do the job. He’s following in the footsteps of his forest ranger father, who has written a cache of letters voicing his concerns to provincial officials over two decades.

Benwell said that since the middle of July, he’s watched the Three Valley Lake fire grow from one-fifth of a hectare to more than 60 hectares, where it now threatens a hotel property, a Canadian Pacific Railway line, and Benwell’s personal woodlot and Crown land in which he has a harvesting interest.

“I talked to a fellow with BC Wildfire [Service] yesterday, and I wouldn’t say it got heated, but I don’t think he was very pleased to talk to me. And his claim, which is probably true, is ‘I didn’t have the resources to put on the fire,’” Benwell said.

“Small fires have an urgency on their own, because if you can catch them small you save yourself a huge problem in the future, and that’s a problem in how [BCWS] triages priorities. I think many fires that are now becoming major crises are fires that they have left.”

On July 27, BCWS reported that it was continuing to monitor the blaze while “CP Rail has its own aerial resources responding to the fire.”

In the absence of help from the wildfire service and with 660 hectares of timber at risk, Benwell said he’s “toying with the idea” of going to fight the fire himself. “But I screwed my knee logging last year, and I’m overweight. I’m not the fit logger that I should be.”

In 2018, during the province’s record wildfire season that razed more than 1.3 million hectares of forest, logger and rancher Clint Lambert and his neighbours did exactly that: defied evacuation orders to protect their ranches threatened by two massive forest fires raging in the Francois Lake region in the northwestern interior of the province.

The following year, Lambert ran for election and won a position on the Regional District of Bulkley-Nechako. But for the next three years there, his calls for fundamental change in how the province fights wildfires fell on deaf ears, he says.

“I was told ‘it’s a big ship and it takes a long time to turn it,’” said Lambert, who wants more local control over BCWS decisions and more freedom for residents to defend their property.

“Up here our main industry is forestry, the second is agriculture. So if either one of those things burn, you don’t have any industry here.”

On July 8, the BC Cattlemen’s Association (BCCA) obtained “initial attack” authority from BCWS and negotiated a protocol allowing a first response by “local stakeholders … on a fire that has started in their community and is not yet being actioned by BC Wildfire Services.”

In response to an email query by The Epoch Times, BCCA general manager Kevin Boon said he was unavailable due to “dealing with the fires.”