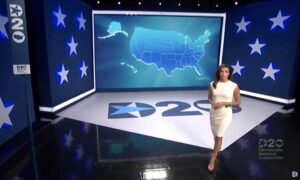 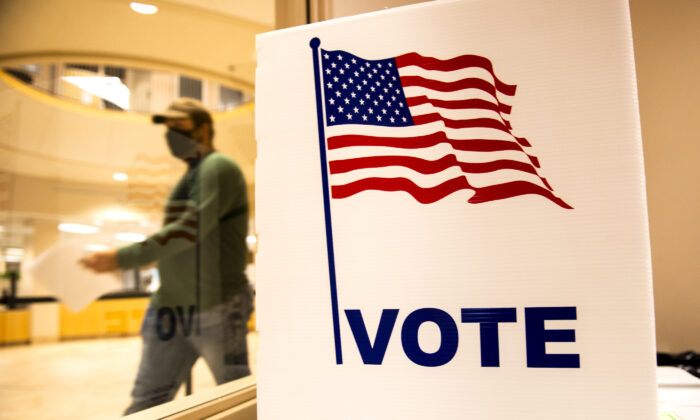 A voter leaves after filling out their ballot at the Beltrami County Administration building in Bemidji, Minn., on Sept. 18, 2020. (Stephen Maturen/Getty Images)
Viewpoints

This week, Americans will have their final chance before the election to listen to the presidential candidates present their competing visions for the country.

Based on the debate’s announced topics—COVID-19, American families, race in America, climate change, national security, and leadership—the differences should be clear.

Fighting COVID-19 provides President Donald Trump the opportunity to point out that former President Barack Obama and former Vice President Joe Biden’s administration left us with little capacity to deal with a pandemic. While Biden and House Speaker Nancy Pelosi were calling Trump racist, he closed down travel from China, which clearly saved American lives. While New York Gov. Andrew Cuomo was sending nursing-home residents infected with SARS-CoV-2 back to infect other family members, Trump was sending a ship to New York to reduce the burden on hospitals and rallying American companies to supply the needed surge in personal protective equipment and medical supplies. The sad reality is that people die in a pandemic. But Trump’s early action clearly saved lives. The vaccine is on its way, and the economic damage done through good intentions must be negated by an active, robust economy going forward.

American families will be better off under a Trump administration. A Stanford University study released this week revealed that the policy that would be implemented if Biden and Kamala Harris are elected would result in a $6,500 drop in median household income, with 4.9 million fewer jobs. Their plan is so egregious that rapper-actor 50 Cent has endorsed Trump. He understands that a vote for Biden-Harris is a vote for a 62 percent tax rate in New York.

Trump’s focus on law and order is also better for families. To build a prosperous family, you must be able to work, shop for groceries, and get gas without being afraid that you will be a victim of violence. Rioters who destroy businesses hurt entrepreneurs and the ability of workers to provide for their families.

While his detractors label him as racist, Trump has delivered real results for blacks, just as he has for all Americans. Trump signed the First Step Act, funded historically black colleges and universities, and created Opportunity Zones. The historic growth in jobs that occurred under Trump’s administration fueled a sharp increase in minority employment. While Biden is focused on pitting racial groups against one another, Trump is focused on providing opportunity for all, regardless of race.

Under Trump’s leadership this year, the Great Outdoors Act was signed into law, an accomplishment that none of the last five presidents had been able to achieve. It provides permanent funding for the Land and Water Conservation Fund. A Biden-Harris administration would pass the Green New Deal, which is job-killing legislation. The Democrats base this on a false choice that we can have either a good economy or a better environment. Trump understands that American ingenuity—through innovation and tax incentives—will allow both to happen.

National security is a topic where Trump stands ahead of Biden. He puts America and Americans first, negotiating with other countries to get the best deal for the American people. This stands in stark contrast with the Obama-Biden administration, which started off with an apology tour and was consistent in blaming America first.

As for leadership, while others will focus on Trump’s tweets, comments and personal abrasiveness, the contrast is unmistakable. While Biden-Harris might appear to have good motives, their policies are inadequate, ill-conceived, and mistaken. Based on the Stanford report, their policies would result in a greatly reduced America. Biden has been leading for 47 years; he has had his chance—and he has failed.

Trump’s leadership has yielded real results. A Gallup poll last week noted that 56 percent of Americans said they were better off today than they were four years ago. While the news media focuses on divisiveness, Americans understand that shared values hold us together as a nation; that freedom allows us as individuals to make our own choices; that we have the right to speak freely about our beliefs and the right to vote for the person we believe will be best for our country.

The choice is between Trump, who has confidence in the American people and the foundation of life, liberty, and the pursuit of happiness, and Biden, who believes we will be better off if we cede more control to the government.

Trump understands that confidence is contagious. America is not perfect, but it’s the safest, freest, most prosperous nation in the world. Immigrants rush to come into our country, not because we are an evil place with systemic problems but because we believe people have the right to chase their dreams as they see fit, in an environment based on the rule of law, freedom, liberty, and a respect for individuals.