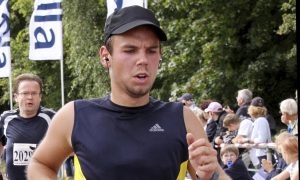 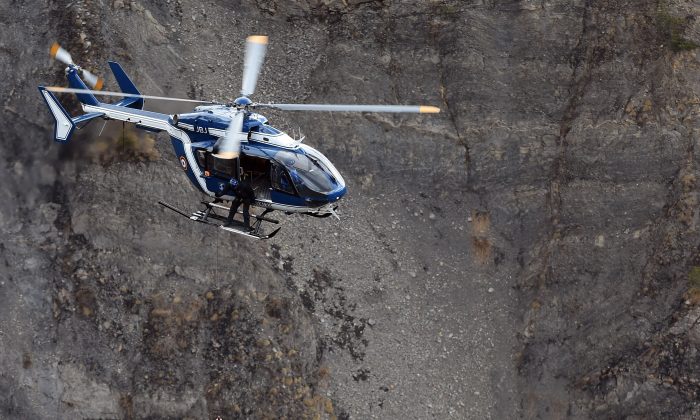 A French gendarmerie's helicopter lifts an investigator on March 26, 2015 near scattered debris on the crash site of the Germanwings Airbus A320 that crashed in the French Alps above the southeastern town of Seyne. (Anne-Christine Poujoulat/AFP/Getty Images)
Europe

The final moments on the Germanwings plane that crashed into the French Alps sound like something out of a horror movie.

“Andreas, open that door! Open that door!'” the pilot of the plane was heard yelling as he tried to break down the cockpit door with a axe. He was referring to co-pilot, Andreas Lubitz, who is accused of locking himself in the cockpit before slamming the plane into a mountain.

Passengers were also heard crying out in terror as they realized the plane was about to crash, according to prosecutors who listened to the cockpit flight recorder. Investigators heard banging on the door while Lubitz said nothing and could only heard his breathing, reported the Washington Post.

In the wake of the Sept. 11, 2001 attacks, cockpit doors are quite resilient nowadays and are reinforced with Kevlar and complex locking mechanisms, which means it would have been nearly impossible for the pilot to get through with an axe (axes are standard-issue on planes). The doors are now meant to withstand gunshots.

And new details have also emerged regarding Lubitz, 28, on Friday.

Authorities told The New York Times that he hid his mental illness from his employer. Prosecutors said investigators found notes at his home from doctors saying he was too ill to work.

The notes “support the preliminary assessment that the deceased hid his illness from his employer and colleagues,” the report says.

Investigators did not find a suicide note or “any indication of a political or religious” statement that could be linked to the crash.

“However, documents were secured containing medical information that indicates an illness and corresponding treatment by doctors,” Ralf Herrenbrück, who is a spokesman for prosecutors in Düsseldorf, told the paper.

A French military official elaborated on the final moments.

“The guy outside is knocking lightly on the door, and there is no answer,” the investigator told the paper.

“And then he hits the door stronger, and no answer. There is never an answer.” He added, “You can hear he is trying to smash the door down.”

In the U.S., the Federal Aviation Administration mandates that a flight attendant must sit in the cockpit when either pilot leaves the area. In Europe, those regulations aren’t the same, but they will likely be reconsidered.

As a result, Air Canada, Norwegian Air Shuttle, and easyJet on Thursday said they would mandate having two people in the cockpit at all times.

“He definitely did not smoke. He really took care of himself. He always went jogging. … He was very healthy,” said Johannes Rossmann, who lives a few doors from Lubitz’s home in Montabaur.

People in Montabaur who knew Lubitz told The Associated Press that he had been thrilled with his job at Germanwings and seemed very happy.

On Friday, no one was seen coming or going from his family’s large slate-roofed two-story house in Montabaur as more than 100 journalists remained outside. Mayor Edmund Schaaf appealed to the media to show “consideration.”

“Independent of whether the accusations against the co-pilot are true or not, we have sympathy for his family,” he said.

Germanwings said that both pilots on the plane had medical clearance, and it had received no sick note for the day of the crash. Medical checkups are done by certified doctors and take place once a year.