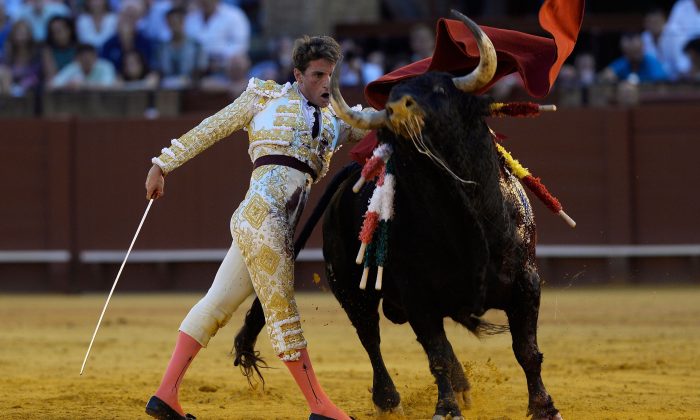 Spanish bullfighter Alfonso Cadaval performs a pass during a bullfight at the Real Maestranza bullring in Seville on Sept. 30, 2018. (Cristina Quicler/AFP/Getty Images)
Europe

The Fight to Preserve Bullfighting in Spain

BARCELONA—When Virginia Ruíz jumped into the ring to comfort a dying a bull, she stunned her native Spain.

To some, the sight of a woman trying to offer solace to an animal whose life was ebbing away prompted sympathy.

Others, however, were outraged. Bullfighters and their supporters, known as aficionados, were furious that Ruiz had interfered in what they view as an integral part of Spanish culture: The matador had risked his life against a bull and the animal had lost the contest.

“I wasn’t scared at first but once I was with the bull, with all the people shouting at me, I was conscious of where I was,” Ruíz said of the incident at a ring in Malaga three years ago.

“They put me in a passageway outside the ring. They started to push me, but there were no police. One man’s eyes were popping out of his head with anger.”

Ruíz is typical of a new brand of Spanish animal rights activists who have used a mixture of direct action, skillfully managed publicity stunts, and old-fashioned lobbying to put animal rights on the political agenda in modern Spain.

Pacma, the first political party to dedicate itself to the cause of animal rights, won over 1.2 million votes in the 2016 general election. It hopes to win representation in the European parliamentary elections coming up in May.

In recent years, a series of left-wing councils—or regional governments—have prohibited bullfighting and cut subsidies for matador training schools, saying they oppose cruelty to animals or don’t want public money to be used for this end.

“The tide of public opinion is changing in Spain. Only a tiny proportion approve of bullfighting or go to see the slaughter and call it entertainment,” said Silvia Barquero of Pacma.

Poll results are used by both sides in this bitter debate to suit their respective arguments.

An independent survey by the Spanish government in 2017 found that the number of bullfights is declining. Two years ago, there were 1,553, a decrease of 2.8 percent compared with 2016.

A 2015 government survey of how Spaniards enjoy themselves found that just 9.5 percent regularly went to see los toros (the bulls). The same poll said 31.2 percent went to the theater and 40.5 percent visited museums.

However, the animal rights lobby has so far been unable to deliver the estocada—the matador’s sword thrust that kills the bull—to finish off what it deems a bloody spectacle.

Indeed, the bullfighting lobby is fighting back.

The Spanish Constitutional Court recently overturned bans on bullfighting in the Balearic Islands and Catalonia in northeast Spain.

“What we are seeing is a fight not just against bullfighting—that is the tip of the iceberg. These people are trying to destroy a culture which extends in Spain to anything to do with animals,” said Victorino Martin, president of the Foundation of Spanish Fighting Bull Breeders, which represents the industry.

“But we will not let these people ruin what is an essential part of our culture, which is so important to many people in Spain.”

A far-right party that defends bullfighting, hunting, and rural life shocked the country last month when it gained a toehold in power for the first time since the death of Gen. Francisco Franco in 1975.

Vox, the right-wing political party, won 12 seats in a regional election in the southern region of Andalusia, and this week became the kingmaker in a coalition between two mainstream center-right parties, the Popular Party and Citizens.

Vox is not part of the coalition but has pledged to support the right in order to oust the Socialist party that has held power for 36 years.

In return, Vox secured a promise for financial support for bullfighting from the Andalusian regional government.

During the election campaign, Vox leader Santiago Abascal promised, “We will bring in a law that will protect bullfighting as part of Spanish culture.”

Bullfighting has been a part of Spanish life probably since at least the 8th century, back when it was a sport practiced by nobles. It has come to be regarded not as a blood sport, like hunting, but as part of the culture. Reports of bullfights appear in the culture pages of newspapers, alongside film or theater reviews.

Leading matadors like Cayetano Rivera and José Tomás are still accorded the same reverence as football players or film stars. As a mark of their star status, they appear in celebrity magazines such as ¡Hola!

Manuel Laureano Rodríguez Sánchez, known as Manolete, is thought to be one of Spain’s greatest, most revered bullfighters. When he died after being gored by a bull named Islero in 1947, he was mourned for days by a nation whose population still lived mostly in rural areas.

Today, Spain is a more urban society where rural pursuits are less popular and concern for animals has risen, says Antonio Lorca, the bullfighting critic of El País newspaper.

“It is not just that we have more choice and other things we can do. We have changed as a society. Spain is totally different from the days of Manolete. We are more urban, and concern for animals has increased. We don’t want bloody sports,” he said.