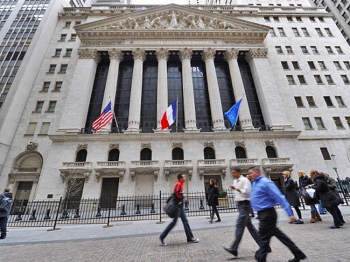 View of the New York Stock Exchange on April 18, 2011. Markets were down after Standard & Poor's issued a negative outlook on US debt. (Stan Honda/AFP/Getty Images)
Business & Economy

The Fight Over Stock Exchanges

In the latest episode of the saga involving the New York Stock Exchange, the Nasdaq OMX Group Inc. and IntercontinentalExchange Inc. (ICE), they have dropped their combined bid to acquire the NYSE Euronext, the companies announced on Monday.

The withdraw of Nasdaq and ICE’s bid clears the way for NYSE to merge with Germany’s Deutsche Boerse AG for $10 billion, and avoids a tough investor battle going forward. NYSE’s board of directors has already twice rejected ICE and Nasdaq’s proposals in the past.

The two companies backed off after conversations with the U.S. Department of Justice saying that they would likely not win antitrust regulatory approval. “It became clear that we would not be successful in securing regulatory approval for our proposal despite offering a variety of substantial remedies,” Bob Greifeld, chief executive officer of Nasdaq, said in a statement Monday.

Greifeld said that he saw this as an opportunity to strengthen the industry within the United States “amid an ongoing shift of these vital activities and jobs outside of our country.”

The move on Monday clears the way for Deutsche Boerse and NYSE to merge, creating the world’s biggest exchange spanning two continents and 11 countries.

If Nasdaq and ICE were successful in their $11.3 billion bid, they would have broken up the NYSE into a stock exchange, which would integrate into Nasdaq, and a derivatives exchange, to be merged into ICE, a futures and options exchange based in Atlanta.

But NYSE cited the breakup as well as regulatory hurdles as reasons for rejecting Nasdaq and ICE.

“Breaking up NYSE Euronext, burdening the pieces with high levels of debt, and destroying its invaluable human capital, would be a strategic mistake in terms of where the global markets are going,” NYSE Chairman Jan-Michiel Hessels said in a statement last month after Nasdaq’s hostile takeover offer.

North of the U.S. border, the TMX Group, which runs the Toronto Stock Exchange (TSX), had received an offer to be bought by a consortium of Canadian banks and pension funds called Maple Group, to keep the TSX owner in Canada.

TMX had been in negotiations with the London Stock Exchange Group (LSE) regarding a merger. Maple's offer of CA$3.6 billion (US$3.7 billion) is higher than LSEG's $3 billion bid.

Our "merger offers compelling financial, strategic, and operational benefits for shareholders, the full breadth of market participants, listed companies of all sizes, investors, and other stakeholders," LSE said in a statement on Monday.

Maple Group argues that the LSE bid would make TMX foreign owned and could stifle Toronto's ascension as one of the world's global financial centers.

Four Canadian banks were part of the Maple bid, including CIBC, Toronto-Dominion, Bank of Nova Scotia, and National Bank of Canada.