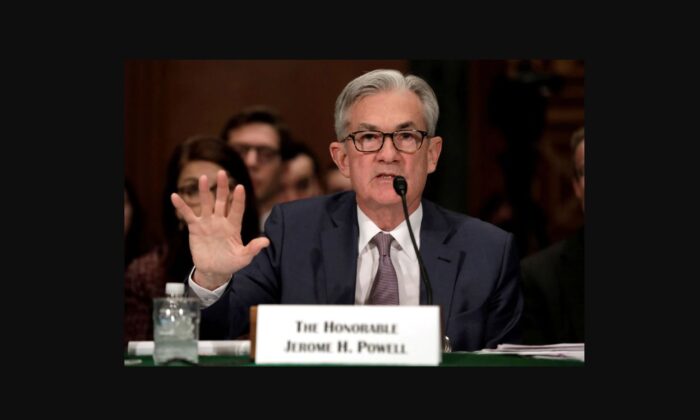 Federal Reserve Board Chairman Jerome Powell testifies before the Senate Banking Committee in a hearing on the semi-annual monetary policy report to Congress on Capitol Hill in Washington on Feb. 12, 2020. (Yuri Gripas/Reuters)
Viewpoints

The Federal Reserve Won’t Be Saving the Democrats

Americans have a great sense of smell when it comes to lies. Just when President Joe Biden’s negatives hit the cellar, newly minted, transparently dishonest assertions from him reveal that—like the five underground floors of the nearly century-old landmark Federal Reserve Bank of New York Building in lower Manhattan—there are actually basements beneath the basement to which it is possible to descend; amazingly, Biden’s approval continues to sink from bad to worse.

Asked last week by NBC’s Lester Holt about the nation’s worst-in-40-years 7.5 percent consumer inflation, the president claimed, “The reason for the inflation is the supply chains were cut off, meaning that the products, for example, automobiles—the lack of computer chips to be able to build those automobiles so they could function; they need those computer chips. They were not available.”

To combat his historic inflation, Biden promised “I am going to do everything in my power to deal with the big points that are impacting most people and their homes.”

A prominent feature of this anti-inflation action plan is the tone-deaf notion of changing the regulations on hearing aids. You heard right.

And one of Biden’s most oft-repeated talking points on inflation is that “17 Nobel laureate” economists “have written a letter affirming that” his Build Back Better multi-trillion-dollar spending extravaganza “will reduce inflationary pressure in the economy.” To the contrary, one of the letter’s signatories, Princeton’s Christopher Sims, told CNN that “it will probably have little short-term effect on inflation” and “the impact of the legislation on inflation is uncertain.” Another signatory, Harvard economics and mathematics professor Eric Maskin, warned that Biden’s spending proposals would only “have the potential to reduce inflationary pressure in the longer term because they should expand productive capacity and therefore supply,” but that “it is much harder to say what their effect on inflation might be in the short to medium term.” (Emphasis added.)

Unsurprisingly, the president is also taking the opportunity, irresistible to the left, to blame the private sector for inflation, in particular the fossil fuel industry. In November, he wrote Federal Trade Commission chairwoman Lina Khan to claim “mounting evidence of anti-consumer behavior by oil-and-gas companies”—a calculated distraction from his policies that make oil and gas more costly by restricting, or adding to the expense of, the production of fossil energy within the United States.

It wasn’t long before left-leaning Harvard economist, Clinton Treasury secretary, and Obama National Economic Council chief Lawrence Summers poked Biden with the pointed tweet that “the emerging claim that antitrust can combat inflation reflects ‘science denial,’ and added that “there are many areas like transitory inflation where serious economists differ. Antitrust as an anti-inflation strategy is not one of them.”

On Thursday of this week an even more noxious skunk crashed the White House’s garden party. High-ranking Obama Treasury Department official Steven Rattner penned an op-ed in The New York Times accusing Biden of deceit with regard to inflation. The president’s contentions were “simplistic and misleading,” Rattner wrote, supply chain issues being “by no means the root cause of our inflation.” Then he quipped: “Blaming inflation on supply lines is like complaining about your sweater keeping you too warm after you’ve added several logs to the fireplace.”

According to Rattner, “most of our supply problems have been homegrown: Americans have resumed spending freely, and along the way, they have been creating shortages akin to those in a shopping mall on Black Friday.” That increased spending is the consequence of “vast amounts of government rescue aid.” Rattner concluded that “It’s a classic economic case of ‘too much money chasing too few goods,’ resulting in both higher prices and, given the extreme surge in demand, shortages.”

But cock an ear in the White House briefing room and you’ll hear press secretary Jen Psaki blaming, naturally, Republicans in the Senate, some of whom are balking at confirming Biden’s nominees to the Federal Reserve Board. On Wednesday, for instance, she told us that “having a full Federal Board fighting inflation … would be the ideal scenario here.” The day before, Psaki marveled at the wizardry the Fed can perform. “It’s never been more important to have confirmed leadership at the Fed to help continue our recovery and fight inflation. And, obviously, they have a unique role to play, an important—a vital role to play as it relates to inflation.”

Biden’s Fed nominees Lisa Cook, Philip Jefferson, and Sarah Bloom Raskin claim that fighting inflation will be their top priority if confirmed, alongside current Fed governor Lael Brainard being elevated to the vice chair slot. But Raskin is the wife of Rep. Jamie Raskin, the Maryland Democrat who was the lead manager of Trump’s second impeachment last year; she has devoted most of her energies to promoting green energy and harassing oil and gas interests, while Cook and Jefferson’s priorities have to date revolved around wokeness and race.

Meanwhile, Biden Treasury Secretary Janet Yellen, Obama’s Federal Reserve Chairwoman, absurdly made the politically self-serving assertion to CNBC last month that “if we’re successful in controlling the pandemic, I expect inflation to diminish over the course of the year and hopefully revert to normal levels by the end of the year around 2%.” Compare that obvious attempt to help congressional Democrats avoid a mid-term blowout in November with the reality check from St. Louis Federal Reserve Bank president James Bullard this week: “We’re at more risk now than we’ve been in a generation that this could get out of control,” he said during a panel at Columbia University. Last Monday, Bullard called for rapidly increasing short-term interest rates by 100 basis points.

Dartmouth monetary economics Professor Andrew Levin, who has advised the Fed for many years as well as numerous foreign central banks, told the prestigious Shadow Open Market Committee last week what kind of dramatic tightening in Fed policy it would take to make a real dent in inflation, and it is clear that such drastic action can never be expected from Biden’s appointees.

“Price stability cannot be achieved by following an ad hoc ‘meeting-by-meeting’ approach to Federal Open Market Committee (FOMC) decisions and communications,” Levin warned. “The FOMC needs to move promptly to a neutral stance to ensure that it doesn’t keep adding fuel to the inflationary inferno.” Over the next year, reaching such a stance would “almost surely involve raising the federal funds rate” (the short-term interest rate banks charge in loaning money to each other) “to 4% or 5%, and perhaps even further.”

Levin also stressed that “The FOMC urgently needs to start following a transparent and systematic policy strategy”—an occurrence as unlikely today as it has ever been to the U.S. central bank, an institution jealous of the privacy of its deliberations.

Upon being nominated to serve another term as Fed chairman by Biden in November, Jerome Powell, in a display of comical understatement, said the post-COVID opening of the economy was causing “a burst of inflation,” and he said he would use the Fed’s powers “to prevent higher inflation from becoming entrenched.”

That doesn’t signal anything resembling a Paul Volcker determined to “take away the punch bowl.” Over less than two years, Volcker presided over the raising of the fed funds rate by near to 900 basis points, bringing inflation under control for what ended up being four decades.

So it will not be the Federal Reserve who comes over the hill in the nick of time to save Democrats from their lies and their extreme policies this November. Inflation, so often called “the cruelest tax,” will be an albatross around their necks as voters submit their ballots, along with the blame they deserve for high crime, an unsecured border, and America’s weakness abroad being exploited by Russia and mainland China.