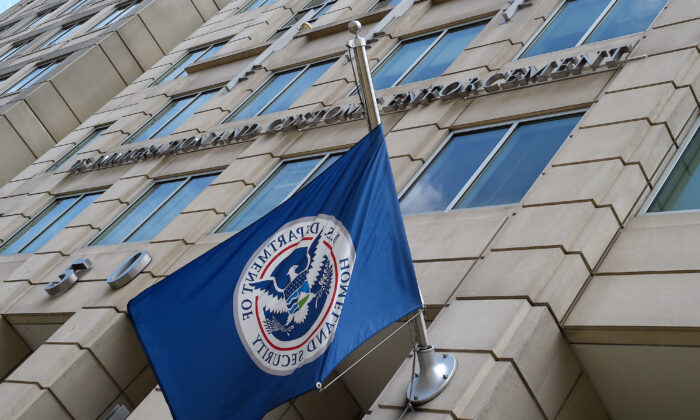 The Department of Homeland Security flag flies outside the Immigration and Customs Enforcement (ICE) headquarters in Washington on July 17, 2020. (Olivier Douliery/AFP/Getty Images)
Viewpoints

The Federal Government Replaces Twitter as Our Ministry of Truth

In true Orwellian fashion, the Department of Homeland Security concerns itself with decreasing the security of civil rights

The announcement that the U.S. Department of Homeland Security (DHS) will be overseeing the creation of a “Disinformation Governance Board” couldn’t come at a better time for America’s legacy mainstream media outlets and the individuals who staff them.

Still shaking from Elon Musk’s recent purchase of Twitter, the notion that U.S. corporate news may be further losing its grasp over complete narrative control has been enough to create an atmosphere of hysteria.

Twitter was a vital part of how these outlets attempted to control the release of information. The social media platform’s moderators largely served as a check on the acceptable viewpoints being discussed in the public square.

Anything counter to the story presented by government-approved “official” news sources could be flagged by fact-checkers or outright banned by moderators for being at least partially false. Their proof? Well, the information wasn’t substantiated—by those same sources. The circuitous reasoning facilitated an idea laundering operation that made sure only those stories with a stamp of biased approval made it out uninhibited.

Musk’s move has therefore resulted in a predictable upheaval. Some have wondered whether “too much freedom” of speech would drive users away. Others postulated that in reality, his actions are probably just because the Tesla CEO misses apartheid in South Africa. The general sentiment of despair was matched on Twitter as thousands took to their keyboards in an effort to denounce the dangers of unmitigated freedom of speech—and, often, speech in general.

As if by Providence, a mere two days later came the pronouncement that a federal government-controlled board of “experts” would be convening to identify potentially harmful or inappropriate information in the run-up to November’s midterm elections. No longer would America’s newsmakers have to worry about their flock of citizens being led astray by information not directly curated and delivered by them.

Media antics aside, however, the Disinformation Governance Board has frequently been disparaged as a modern day “Ministry of Truth,” in reference to George Orwell’s literary classic “1984.” To see if this comparison is warranted, it is worth remembering what the main functions of that fictional body actually were, as described in the novel.

In Orwell’s dystopian masterpiece, the Ministry of Truth was responsible for falsifying and changing the record of events to fit the ruling regime’s political priorities at any given time. Importantly, the ministry was also responsible for the creation and promotion of “Newspeak,” a simplified language meant to replace English that would facilitate the government’s control over its citizens’ very thought processes. Freedom of thought would subsequently be preempted, as it became linguistically impossible to articulate complex concepts or abstractions. The only thing that citizens would—or could—think was exactly what the government needed them to think.

It may be a bit of a stretch to claim that the U.S. government is directly seeking to end freedom of thought by its creation of the new disinformation board; however, its timing with Musk’s purchase of Twitter and the subsequent debate swirling around the move does have important implications.

At the crux of the argument over online censorship is the question of who exactly gets to decide what is true, and even more, whether disagreement over what is presented as “truth” is permitted in the public square. In this regard, the “1984” metaphor is very appropriate.

One of the primary Twitter bannings that served as an impetus for Musk’s move is believed to be the platform’s suspension of the satire news site The Babylon Bee. After news that Pennsylvania’s former Secretary of Health Dr. Rachel Levine was being nominated as one of USA Today’s “Women Of The Year,” the Bee decided to also nominate Levine—only this time, as its “Man of The Year.”

Levine is a man who identifies as a woman, so Twitter suspended the account based on a violation of the platform’s policy on “hateful conduct.” This, of course, raises the question about what exactly a man or a woman is. It is not the first time that Twitter has cracked down on someone it deems to be violating its postmodernist definition of gender as a fluid construct that can change at any given time.

In other words, understanding the concept of gender as inherently tied to biological sex was declared outside the bounds of respectable discourse. Remember that even the newest member of the U.S. Supreme Court, the highest legal body in the land, could not provide an adequate definition for “woman” during her confirmation hearing.

Similar to how Newspeak was utilized in “1984” to halt “Wrongthink”(thought contradictory to the regime’s narrative), Twitter enforces linguistic codes derived from a narrow ideological conception of reality to control speech on its platform. Orwellian, indeed.

There are many more examples of Twitter punishing Wrongthink, as well. An article at The Federalist lists 100 opinions—and, in some cases, just objective facts that are verboten due to their inconvenience for leftist narratives—that may have previously been flagged for misinformation.

Political correctness serves as our own version of Newspeak. It ensures that each individual self-censors and curates their opinion, so that it adheres to the linguistic strictures of those who seek to define the bounds of acceptable discourse. If one decides to willfully break those codes, his or her ability to participate in the public conversation is revoked. Allowing genuine freedom of speech in line with the first amendment of the U.S. Bill Of Rights would clearly upset this dynamic.

What about the Ministry of Truth’s outright falsification of news stories, or changing the record to fit the current political objectives of the ruling class? In “1984,” previously recorded information that no longer adhered to the regime’s narrative was sent down a garbage chute known as a “memory hole.” Yesterday’s “facts” were quietly incinerated, and subsequently erased from history—and living memory.

Twitter moderators have also rigorously patrolled user accounts for any deviation from “the science TM,” especially around the COVID-19. Many have been suspended, flagged, or outright booted for questioning vaccine effectiveness, alternative treatments, and the efficacy of masking.

But “the science TM” has consistently changed throughout the pandemic, and what was true one day could get you banned the next (or vice versa). Perhaps the best example of this is former New York Times reporter Alex Berenson being thrown off the platform for arguing that mRNA COVID vaccines don’t stop infection or transmission. At the time, this was deemed disinformation. Since then, the director of the Centers for Disease Control and Prevention has subsequently confirmed that statement, although most Americans at this point either have, or know someone who has, been infected with the virus despite receiving the vaccine.

COVID isn’t the only issue around which speech is curtailed due to established “fact.” Twitter recently announced on April 22 that it would no longer be allowing any advertisements on the platform that “contradict scientific consensus on climate change.”

Then there is perhaps the best example of media malfeasance: the Hunter Biden laptop story. Nearly every mainstream outlet denounced the latter as a false smear campaign when the New York Post initially broke it. It was even referred to as Russian disinformation. Then-presidential candidate Joe Biden made that argument verbatim on the 2020 presidential debate stage. Suppression of the Post’s story likely had a significant impact on the outcome of that election. Twitter initially banned it, and even went so far as to suspend the Post’s account when it originally posted the article.

At this point, it should be evident that government officials, corporate newsrooms, and loyal social media disseminators in our own society are clearly not worried about the spread of mis- or disinformation. They are worried about the prospect of losing control over their ability to shape the public conversation.

The motivation has always been political. There is rarely an apology for falsified reporting in the past; instead, the old story is slipped down the memory hole as the new information is subtly presented as the correct, unquestionable truth. This is exactly what happened with the reporting on Hunter Biden’s laptop. In a rare occurrence, some will even proudly boast their previous falsifications as a necessary means to secure the proper political end for the “public good”—as defined by them.

The thought of a social media platform freed from the oversight of left-wing regime-friendly moderators threatens this monopoly on narrative control. Since its founding, Twitter has dropped all pretenses of being an arena for the free exchange of ideas. Instead, it has fashioned itself into an echo chamber for promoting regime-approved narratives.

In effect, it has become its own unofficial Ministry Of Truth for the online public square. Musk’s purchase of the platform threatens this, and the Disinformation Governance Board will help mitigate the fallout from lost narrative control.

In the landscape of “1984,” words have come to mean their opposites. “War is peace. Freedom is slavery. Ignorance is strength,” went the official party line.

“Censorship is free speech” seems to fit the paradigm, as well.