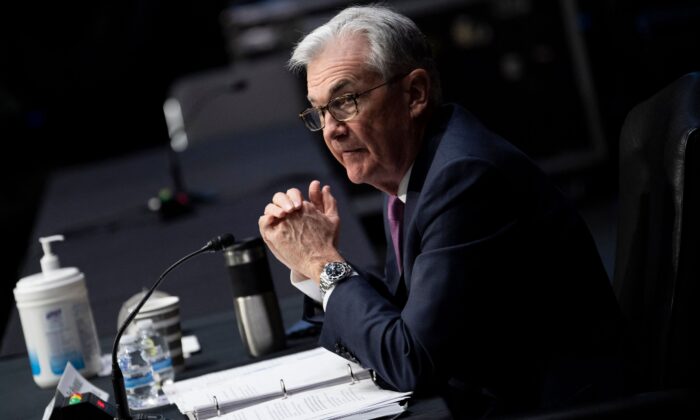 Federal Reserve Board Chairman Jerome Powell speaks during his re-nominations hearing of the Senate Banking, Housing and Urban Affairs Committee on Capitol Hill in Washington, on Jan. 11, 2022. (Brendan Smialowski/Pool/AFP via Getty Images)
Viewpoints

The Fed Is Trapped

While the world is focused on the situation between Russia and Ukraine, the global economy is already rapidly slowing. Further uncertainty because of geopolitics and war could easily tip the global economy into a recession. For the Federal Reserve, the Russia and Ukraine conflict couldn’t come at a worse time, as the central bank is about to embark on its first tightening cycle since 2004.

Many pundits are calling for the Fed to back off its tentative plan to raise the federal funds rate or even commit to a slower pace of rate hikes as any tightening could shock the U.S. economy. Even though Fed Chairman Jerome Powell would probably prefer to keep monetary policy loose, inflation is running rampant.

Many consumers are blaming the Fed for creating runaway inflation because of its overuse of quantitative easing and zero-interest-rate policy, as many Americans are not seeing their wages rise as fast as consumer prices are rising. The Fed’s credibility is once again on trial, as it’s supposed to be using monetary policy to achieve both maximum employment and price stability.

Those who are unfortunate to hit the unemployment line can quickly find work. Total claims remain stable at around 2 million per week, validating that those out of work can find another job. Even the labor force participation rate is slowing, moving higher as long-term unemployed are returning to the workforce.

From the Fed’s perspective, a tight labor market should lead to a further increase in wages that should propel inflation even higher. The inflation issue is no longer an employment-related issue but one of supply and demand. The Fed believes demand is outpacing supply.

Due to the unprecedented shutdown of the global economy, supply chains ground to a halt as the world confronted a global pandemic. After repeated rounds of fiscal stimulus, shelves and warehouses were emptied as consumers eagerly spent their government handouts. Without factories and supply chains open, the supply of available goods quickly disappeared.

While supply chains are now showing signs of easing, many experts suggest it won’t be until this summer before supply chains are back to pre-pandemic operations. Despite a lack of fiscal stimulus, consumers aren’t showing any signs of slowing their spending as personal spending and consumption continue to increase based on the January data.

Even though neither Russia nor Ukraine are big trading partners with the United States, the conflict could further disrupt global supply chains and manufacturing, which could push inflation even higher. For the Fed, there’s only one solution, which is to constrict demand until supply chains normalize. The only tool the Fed has remaining, as quantitative easing will soon end, is to start raising the federal funds rate.

Market participants have been anticipating a rate-hike cycle by selling and shorting bonds which have caused interest rates to rise. Despite strong foreign demand from the monthly Treasury auctions, especially in February, the persistent selling of market participants has overwhelmed demand and sent rates higher.

There’s little sign the economy can handle higher interest rates, as demand for loans is quickly falling. Mortgage applications, a strong barometer for lending demand, have been steadily falling since applications peaked in January. Refinances are leading the decline as homeowners see little need to refinance at a higher rate. Yet market participants remain adamant that rates must rise due to inflation and continue to force long-term rates higher.

The Fed desperately needs long-term rates to rise, since raising the federal funds rate will put further upward pressure on short-term yields. What few understand is that without lending demand at higher rates, long-term yields will eventually fall. Rising short-term yields and falling long-term yields threaten to invert the yield curve, which would cause banks to massively scale back their lending operations.

The expansion of new debt is critical in a debt-based financial system, so any slowdown or contraction in lending can easily trigger a recession. With yields across the Treasury curve already rather tightly compressed, any minor policy mistake by the Fed can have large economic repercussions. Unfortunately for the Fed, it’s trapped.

With inflation running rampant with no sign of abating, the Fed will be forced into raising the federal funds rate just as quantitative easing ends. By tightening monetary policy when inflation is running too hot and when Treasury yields are tightly compressed, the odds are high that the Fed will tip our economy into a recession.

The Fed is trapped and has no choice but to tighten monetary policy, since inflation is suffocating the finances of many U.S. households. Like all other Fed tightening cycles, this one will end in a deflationary crash as the Fed will once again send the economy into a recession, if not worse—another financial crisis.