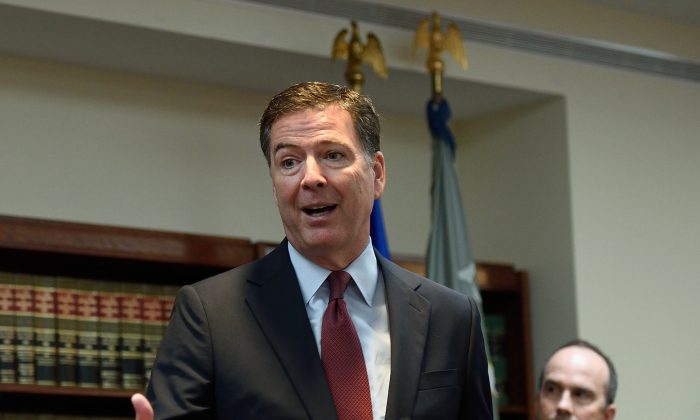 FBI Director James B. Comey speaks during the announcement of charges against FIFA officials at a news conference in New York on May 27, 2015. (Don Emmert/AFP/Getty Images)
News

As requested by the FBI, I delivered a presentation titled “The FBI: Honor, Leadership, Protecting America” on May 28 for its New York Field Office leadership development series.

This is a follow-up to numerous presentations for the bureau highlighting leadership, vigilance, and collaboration between law enforcement, private security, and all law-abiding people as critical to America’s security.

Safeguarding our homeland and protecting the nation are the responsibilities of everyone. Each person has a role to play and must have their eyes wide open to dangers that threaten freedom, democracy, and our way of life.

The world is a much different place since the tragedy of 9/11. The order of the day is an abundance of caution and a clarion call to do something immediately if we suspect something.

America’s security and morale can change in a heartbeat but terrorism is preventable.

During this FBI presentation, I used my signature metaphor of a head-on train collision causing catastrophic chaos, painting the picture of America’s crisis of leadership and culture of violence.

As highlighted in a graphic presentation, the crisis of leadership included the following:

• Massive and pervasive arrests, indictments, convictions, and imprisonments of public officials on the federal, state, county, city, and local levels including recent cases of New York State Assembly Sheldon Silver and ex-Virginia Gov. Bob McDonnell and his wife
• Continuous corporate fraud cases including Enron, WorldCom, Purdue Pharma L.P., Schering Plough, the narcissistic arrogance of Lehman Brothers’ Richard Fuld, and the long tentacles of Bernard Madoff’s $50 billion swindle that wreaked havoc on so many lives
• Scandals within the world of sports including Major League Baseball, the National Football League, indictments of high-ranking officials and corporate executives associated with FIFA, and the fall from grace of Olympic champions
• Crimes in religious communities, including the sexual abuse of children in the Roman Catholic Church compounded by disgraceful cover-ups from bishops who failed to protect society from contemptuous crimes that screamed to heaven for justice
• Scandals against our veterans who have borne the battle yet suffer from deplorable health care deficiencies, unemployment, and homelessness
• The entertainment world’s crisis of stars involved with substance abuse, domestic violence, and shootings

The crisis of violence was depicted in events including the following:
• Sexual assaults of teenagers by their peers with reprehensible postings of the attacks posted on-line that led to heart-breaking suicides of numerous victims
• Horrific incidents of school and campus violence including Columbine, Virginia Tech, Newtown, and Yale University where a murdered student’s missing body was found on what would have been her wedding day
• Senseless workplace violence massacres that include the killing of 14 at a Binghamton, New York Immigration Office, the killing of 12 people during a Batman movie in Colorado, the beheading of a person in a Oklahoma food procession plant by a terminated employee, and the Navy Yard mass shooting that left 13 dead
• On-going violence at houses of worship, once considered sanctuary, that include people shot dead during worship services and the killing of pastors and priests
• Senseless acts of terrorism including the Boston Marathon attack, 9/11, and the lone wolf attack of NYPD officers
• An uptick of police officer fatalities who died while faithfully protecting and serving our communities

As an organization whose priorities include protecting America from a terrorist attack, combating public corruption at all levels, and combating significant violent crime, the FBI is critical to turning the tide away from this head-on collision.

The FBI mission is summarized in its motto of fidelity, bravery, and integrity as well as in its core values:
• Rigorous obedience to the Constitution of the United States
• Respect for the dignity of all those we protect
• Compassion
• Fairness
• Uncompromising personal integrity and institutional integrity
• Accountability by accepting responsibility for our actions and decisions and the consequences of our actions and decisions
• Leadership, both personal and professional
• Diversity

The nearly 35, 000 employees of the FBI and their tireless dedication to protecting and defending our country are deserving of admiration and emulation by every American.

Our appreciation for their efforts and personal dedication to complement their mission, motto, and values is the heart of America’s security and reawakening the nation.