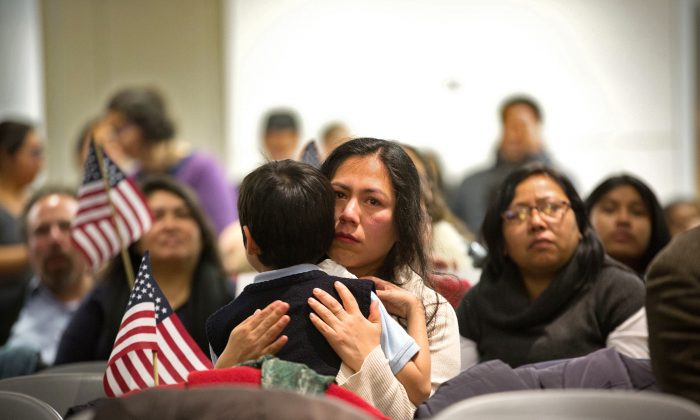 A district court judge in Texas issued an injunction on Monday ordering all federal agencies to halt their implementation of President Barack Obama’s execution action on immigration, dealing a major setback to pro-immigration advocates and bolstering the Republican efforts to reverse the president’s immigration policies.

The injunction originates from a lawsuit against the Obama administration filed by a group of 26 states after the president created an immigration program that would shield 5 million illegal immigrants from deportation and grant them work permits.

The decision did not rule that the president’s immigration program was illegal or unconstitutional, but sought to suspend the program while its legality is being tested in the courts. The judge said that granting virtual legal status to millions of people by giving them drivers’ licenses and work permits is “virtually irreversible.”

“The genie would be impossible to put back into the bottle,” the judge wrote, citing as an example a 1929 Supreme Court case where the sums paid to a tax later found unconstitutional could be not retrieved.

“The law is on our side and history is on our side,” Obama said Tuesday, and said that the White House would appeal the decision.

In Congress, Senate Democrats had repeatedly filibustered a bill funding the Department of Homeland Security because it contained amendments blocking Obama’s immigration programs. Some had hoped the injunction would spur House Republicans to pass a “clean” funding bill without the amendments, but Speaker John Boehner quashed those speculations on Tuesday.

“The president said 22 times he did not have the authority to take the very action on immigration he eventually did, so it is no surprise that at least one court has agreed,” Boehner said in a statement. “Hopefully, Senate Democrats who claim to oppose this executive overreach will now let the Senate begin debate on a bill to fund the Homeland Security department.”

The president said 22 times he did not have the authority to take the very action on immigration he eventually did, so it is no surprise that at least one court has agreed.
— John Boehner

Immigration hawks like Sen. Ted Cruz (R-Texas.) celebrated the decision, calling it a “turning point in the battle to stop the president’s lawless amnesty,” and Texas Governor Greg Abbot said the “decision rightly stops the President’s overreach in its tracks.”

The two Republican presidential front-runners were more lukewarm about the decision. Jeb Bush called on Congress and the president to “fix our broken immigration system,” and Scott Walker posted a tepid summary of the injunction on his Facebook page.

Immigration advocacy groups say that the decision is only a temporary setback, and urge illegal immigrants to still prepare for application to deferred action programs.

“Yesterday’s decision is only a delay. We are very confident that both DACA and DAPA [Deferred Action for Parents of Americans and Lawful Permanent Residents] will move forward. In the meantime, it is of the utmost importance that those who are eligible continue gathering all necessary materials and prepare to submit their applications as soon as the program starts.” Janet Murguía, CEO of the National Council of La Raza, said in a statement.

The injunction could be overturned in as early as 10 days if the Department of Justice files an “emergency stay,” to reinstate the president’s immigration program until the appeal process is completed, according to the pro-immigration National Immigration Law Center. But in a conference call Tuesday, the White House said it has not yet decided whether to file an emergency stay.

In the normal appeals process, a decision could be expected from the 5th Circuit Court of Appeals by July or August.

The judge devotes the bulk of his 123-page decision to why the 26 states in the case have legal standing, that is, they have suffered harm at the hands of the federal government. One reason is that the Administrative Procedure Act (APA) requires federal agencies to offer a public notice and comment process before instituting substantive rules.

The administration argues that the president’s executive action is not subject to review under the APA because the agency actions are not yet “final,” but the judge disagreed.

“The DHS has additionally set up a ‘hotline’ for immigrants in the removal process to call and alert the DHS as to their eligibility,” the judge wrote. “The DHS is currently obtaining facilities, assigning officers, and contacting employees to process DAPA applications.”

Joshua Blackman, an Assistant Professor of Law at the South Texas College of Law, had previously predicted that the states would win an injunction against the Obama administration, and wrote in a blog post Monday that he was “fairly confident” that their standing would survive the appeal process.

The judge also makes the case that the president’s creation of the DAPA program does not fall under the category of “prosecutorial discretion” as argued by the administration, but outright policy-making.

“Despite the DAPA memorandum’s use of phrases such as ‘case-by-case’ basis and ‘discretion,’ it is clear from the record that the only discretion that has been or will be exercised is that already exercised by [DHS] Secretary Johnson in enacting the DAPA program and establishing the criteria therein,” the judge wrote. “That criteria is binding. At a minimum, the memorandum ‘severely restricts’ any discretion the Defendants argue exists. It insures that officers will be provided with specific eligibility criteria for deferred action.”