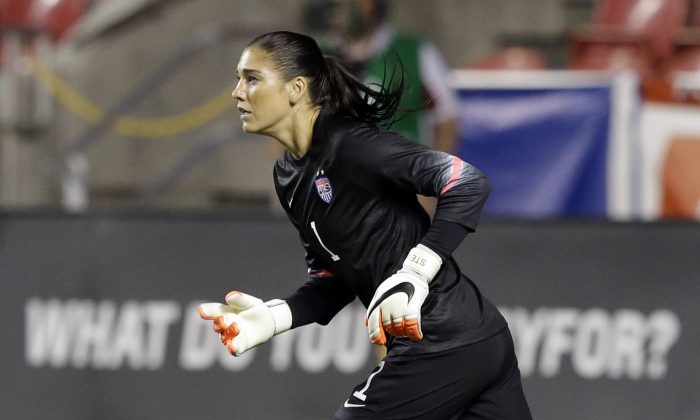 United States' goalkeeper Hope Solo (1) looks up field in second half of an international friendly game with Mexico on Saturday, Sept. 13, 2014, in Sandy, Utah. (AP Photo/Rick Bowmer)
US

New naked pictures of soccer star Hope Solo and actress Lake Bell have hit the Internet in what appears to be the latest update in the leak of hacked celebrity pictures.

Non-nude pictures of both Solo and Bell had been circulating for a couple of days but the new pictures–multiple nude images of Solo, and a topless shot of Bell–appeared online on Friday, September 19.

The huge leak from the apparent hack left hundreds of pictures online, including ones of Jennifer Lawrence, Kate Upton, and Victoria Justice.

Since that Sunday several weeks ago, other pictures have been slowly coming out, although most have been non-nudes.

The origin of the Solo and Bell pictures appears to be Anon-IB, where most of the other pictures showed up first as well.

The website is an offshoot of 4chan’s /b/ board. It was created in 2006 after a mutiny temporarily splintered the board, according to Encyclopedia Dramatica.

While 4chan includes many other things besides naked photos and pornography, Anon-IB focuses almost exclusively on the latter, and typically has many pictures that were stolen from non-celebrity women, or leaked.

The pictures typically appear on Anon-IB, then circulate to 4chan, Reddit, and other websites, as in this case.

Bell hasn’t commented on the photos but Solo put out a statement a couple days later.

“It is extremely sad and unfortunate that the rights of so many women were violated by the unauthorized release of private photographs. This act goes beyond the bounds of human decency and, as such, I stand united with all the women affected and am exploring every option to protect my privacy,” she said.

Users had mixed reactions to the new Solo and Bell pictures.

“Sigh. So much that we can’t see but at least we’re getting trickled crumbs. Could be worse. xD,” said one.

“Thanks A LOT for Lake Bell, she’s awesome! I hope there will be more leaks,” said another.