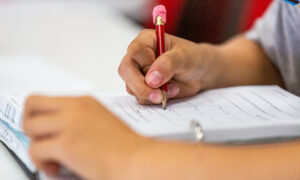 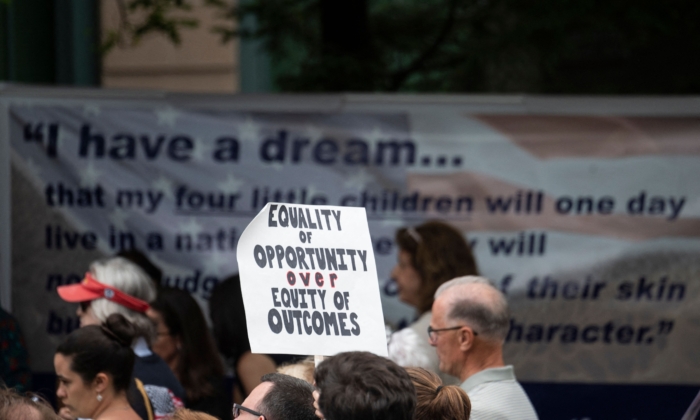 A participant holds up a sign during a rally against critical race theory being taught in schools, at the Loudoun County Government center in Leesburg, Va., on June 12, 2021. (Andrew Caballero-Reynolds/AFP via Getty Images)
Viewpoints

The False Justification for Anti-Racism and ‘Social Justice’

All “anti-racism” and “social justice” writings and campaigns are predicated on the claim that certain races and sexes are being treated unfairly. The only evidence presented to support this assertion is statistical disparities between different census categories of races and sexes.

But before we address the relevant evidence, it’s important to note the revolutionary change in raising census race and sex categories to the utmost importance. Western Enlightenment culture, particularly in the English-speaking world, has always placed the individual as of prime importance. In this view, collectivities such as governments, churches, and business are meant to serve individuals and their interests, rather than individuals being measured by their service to collectivities. But at least collectivities do have some existence, while the census categories of race and sex to which we are asked to bow are empty labels. This is why racism and sexism are so obnoxious: they honor labels rather than actual human beings.

Similarly, females make up 15 percent of the American engineering workforce, and are thus statistically underrepresented. For race and feminist activists, these statistical underrepresentations are in and of themselves proof of discrimination. But do feminists then grant that the demographic dominance of females among students and graduates generally, with females making up close to 60 percent, is proof that the underrepresentation of males is the result of sexist, anti-male discrimination? As most students in the social sciences, humanities, education, and social work are females, apparently they prefer these fields to others, including engineering and some other STEM fields. In the most gender-egalitarian societies, such as Sweden, females make up the lowest percentages of STEM students in the world, presumably because they feel free to follow their preferences. Discrimination doesn’t come into it.

If statistical underrepresentation is the result of discrimination, so too must overrepresentation be a result of discrimination. Let us consider a few cases. National Football League players are 70 percent black (compared to their 13.4 percent of the general population), while 74.2 percent of National Basketball Association players are black, 16.9 white, 2.2 Latino, and 0.4 Asian. Are these statistical levels of participation the result of racial discrimination? Are the NFL and NBA actively discriminating against white, Latino, and Asian players? Rather, it appears that teams are competing for the best players so that they can succeed in their fields of competition. The selection is based on athletic merit, rather than race. No racial discrimination is evident.

If racial discrimination does not explain the dominance of black athletes in professional sport, or the high level of Asian Americans in the medical field, what does explain these successes? We are warned by Ibram X. Kendi that “racial-group behavior is a figment of the racist’s imagination.” Yet, if we consult evidence rather than racialist ideology, it’s beyond dispute that family structure, community culture, and crime level do differ markedly among members of different racial categories.

Educational achievement correlates with family structure. In all standardized tests, Asian Americans achieve the highest scores, then, well behind, are whites, and well behind are Hispanics, and finally blacks. This reflects not only family structure, but also family and community culture. Asian American families have a high level of discipline and respect for parental authority, and their families and communities are notoriously committed to education.

This means the per-capita offending rate for African-Americans was around six times higher than that of whites. As a result, African Americans are highly overrepresented in prisons by demography, although not overrepresented in terms of criminal activity.

Now, Ibram X. Kendi has warned us that “One either believes problems are rooted in groups of people, as a racist, or locates the roots of problems in power and policies, as an antiracist.” Thus, referring to different characteristics of family structure, community culture, and criminality in different race categories is, according to Kendi, racist. Kendi is advocating for black Americans, and rejects the evidence that blacks bear some responsibility for their levels of achievement and for social pathologies such as crime. The problem, according to Kendi, is “power and policies,” and in taking this stand, he’s robbing black Americans of their agency as human beings, of their capability to achieve and to seek their own ends. This is not “anti-racism,” it’s undermining the constituency Kendi claims to champion by no expectations of performance.