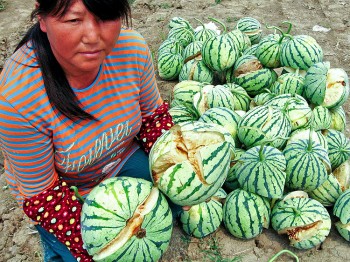 The Fallout from China’s Exploding Watermelons

By Shanshan Wu
biggersmaller
Print
The phenomenon of “exploding watermelons,” a novelty that did not capture the interest of the Chinese public as much as it did in the West, came as another dramatic challenge to the quality and safety of foods from China last week—and just as the authorities were boosting domestic propaganda on improvements to the food supply chain.

Liu Mingsuo, 51, is the watermelon grower who cultivated the field that was first affected. He decided to sow Japanese “quality watermelon” seeds in his tiny, leased greenhouse in Danyang City of the eastern Jiangsu Province. Heeding the advice of a consultant, Liu used a new formula on his field crop to boost growth: one consisting of growth enhancers, sweetening agents, and a calcium solution.

Xinhua, the state mouthpiece, reported that 20 farmers in the province used the same seeds imported from Japan, and that 10 of them also suffered exploding melons.

The suspected culprit chemical is forchlorfenuron, a growth accelerator used on fruit, though reports differed on how many of the affected crops used it. In total 115 acres (47 hectares) of watermelons were lost, many by first-time, unschooled users of the chemical.

The incident once again brought to the attention of the Chinese public longstanding issues in food safety in the country. The use of growth enhancers and sweetening agents is common in many fruits, and China’s tainted food list is long. Included is cadmium-laced rice, dyed Sichuan peppercorns, and processing perversions in the preparation of fish, pork, bean sprouts and milk.

There is barely any “clean” fruit on the market now, according to industry insiders in southern Shenzhen, quoted in a Nanfang Daily article on May 20.

The source, who worked at a vegetable wholesaler, said that to meet market demands—for example, a 20 percent increase in the price of watermelon from last year, according to the Chongqing Morning Post—many Chinese farmers have come to rely on high tech methods, such as ripening and catalytic agents, growth enhancer and hormones.

While growth enhancer stimulates cell division, it also drains fruit of flavor, according to Feng Shuangqing, professor of food science at the China Agricultural University, in an interview with Sound of Hope Radio . “Though the melons become very large, the color of the flesh is not as red, or is even white,” he said.

The same goes for hormone additives. They can increase yields by 20 percent or more and are therefore widely used, according to Zheng Fengtian, a professor of agriculture from Renmin University. But “most of those brightly colored yet tasteless fruits are produced with the use of growth enhancing agents,” he said in an interview with Nanfang Daily.

Like in other countries, hormones and growth agents are permitted in limited amounts in China. But testing for overdoses is virtually non-existent.

A manager of Guangzhou’s largest produce market told Nanfang Daily that the inspection they perform is limited to checking for pesticide residue. “We were not requested to do [hormone testing], nor are there any guidelines,” he said.

In an effort to ward off social discontent as a result of the corrupted food supply, Chinese officials have stepped up propaganda and education campaigns about food inspection and safety—though the results have not always been peachy.

A resident of Danyang—where the exploding melons first surfaced—told The Epoch Times that he believes the authorities should be held responsible for the watermelon fiasco, and all of China’s food safety problems.

“Growth hormones are sold on the market, so farmers are not to blame,” he said. “The ones responsible are the government’s agricultural management departments, as well as the bureau of quality supervision: it is clearly their neglect that has led to this situation.”

While the authorities are still unsure how to clean up the industry, watermelon farmers have begun cleaning up their own mess. Soon after their melons were lost they chopped up the spoils of their ruined crops and used them as feed for fish and pigs.