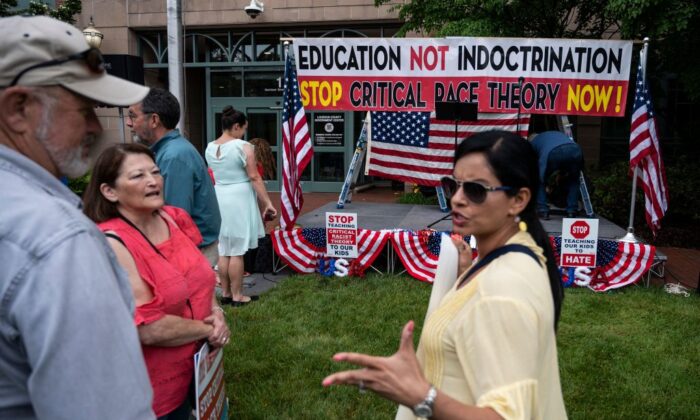 People talk before the start of a rally against critical race theory being taught in schools at the Loudoun County Government center in Leesburg, Va., on June 12, 2021. (Andrew Caballero-Reynolds/AFP via Getty Images)
Viewpoints

The Fallacy of ‘Whitelash’

In Woody Allen’s classic film “Annie Hall,” we encounter the paranoia of the lead character Alvy Singer, who spots anti-Semitism even where there is no anti-Semitism. At one point, he tells his friend Rob that an NBC executive kept asking him, “Jew eat?” Of course the man was asking Alvy, “Did you eat?” The anti-Semitism that Alvy couldn’t find in society, he generated in his own mind.

I keep recalling this incident every time I read or hear on TV, which is a lot, how parental resistance to critical race theory (CRT) in schools is a form of “whitelash.” The accusation is launched against parents in more than 200 school districts who are organizing and protesting against racial indoctrination in their children’s schools. Whitelash is one of those neologisms that basically means “backlash,” except since it is evidently coming from whites, it has been renamed whitelash.

Recently, the online magazine Slate alleged that the parents who fight against CRT are mostly bigots and white supremacists who fear “white replacement” in their communities and are motivated by a desire to “protect whiteness.” Pundits on TV routinely attribute the mobilization against CRT to “white resentment,” “white fragility,” and “white rage.”

Attempting to give these charges an empirical foundation, NBC News journalists Tyler Kingkade and Nigel Chiwaya offered a stash of data to prove that parents nationwide are reacting against “rapid demographic change” and “the exposure of white students to students of color.” NBC showed that in 22 of 33 school districts under review, parental activism could be explained by “backlash over equity initiatives” in districts that are “diversifying faster than the national average.”

NBC embedded its data in a larger narrative that seems glibly lifted from the civil rights era of the 1960s, in which all resistance to change is automatically attributed to people who seek to revive Jim Crow, racial segregation, and the night-riding of the Ku Klux Klan. In a familiar but by now tedious mode, NBC invokes the dark days of the past in which some of these very same school districts actively segregated their school districts to exclude blacks.

But when researcher Christopher Rufo—a leading critic of CRT—reviewed the NBC data, he noted that one-third of the districts in the study had diversified slower, instead of faster, than the national average. Moreover, NBC itself noted that parental protest against CRT had been counted in more than 220 school districts, implying that NBC cherry-picked its data from 15 percent of the sample size, ignoring a whopping 85 percent of the evidence.

Let’s zoom in to two counties of Virginia, Fairfax County and Loudoun County, where parental opposition to racial indoctrination has been particularly high. One might expect, taking NBC’s word, that the leadership of the opposition would be some old-school white male, perhaps someone with direct ancestral ties to the Confederacy. In Fairfax, however, Rufo notes, the parental opposition is led by an Indian American woman, Asra Nomani, who reviles CRT for debasing academic standards and for legitimizing systematic discrimination against high-scoring Asian American students.

In Fairfax and Loudoun counties, the parents who are up in arms aren’t stereotypical rednecks but rather educated, affluent, and racially diverse, Rufo observes. While both counties have rapidly diversified over the past 20 years, Loudoun County has the same proportion of blacks as it did in 2000. The highest rate of population expansion has been among Latinos and Asians, and it turns out they oppose CRT by the same two-to-one margin as whites.

As Rufo demonstrates, data consistently show that the more parents learn about CRT, the more likely they are to oppose it. That’s why the first move of CRT defenders was to deny that it was even being taught in schools. Pundit Joy Reid and many others insisted CRT was a highly abstruse legal theory that was merely the subject of specialized academic debate in law schools. The message here was clear: No need for parents to worry; this isn’t something that’s actually going on.

But parents knew this was a lie. One of the silver linings of COVID-19 is that with students at home and classes being conducted online, parents are in a much better position to see firsthand what their children are being taught. Moreover, why would teachers unions and the U.S. Conference of Mayors endorse CRT in public education if there was no effort underway to teach it?

Once the first line of defense—“We aren’t doing it”—collapsed, advocates of CRT were forced to switch to “Here’s why we’re doing it.” And the best they could come up with is the claim that they are merely teaching established historical facts and that critics were motivated by nothing more than bigotry or “whitelash.” The absurdity of this is clear from the simple fact that survey data show that CRT is opposed by huge margins not only by white parents but also by Latino parents, Asian American parents, and yes, black parents.

Rufo points out that opposition to CRT isn’t even partisan. Both Loudoun and Fairfax counties went heavily for Biden in 2020, one by a 25-point margin, the other by a 39-point margin. Even so, parents oppose CRT in those liberal bastions by an eight-point margin, and 59 percent of public school parents express concern that their children are subject to racial indoctrination.

The problem with CRT is that it’s a poisonous brew of half-truths and lies. The bad news is that this indoctrination seems to have infected, if not taken over, American public education. The good news is that more and more parents, Democratic and Republican, white, black, Hispanic, and Asian, are waking up to the lie and they’re exposing it, resisting it, and warning of a very painful political price if this newest form of child abuse continues in the public school classroom.