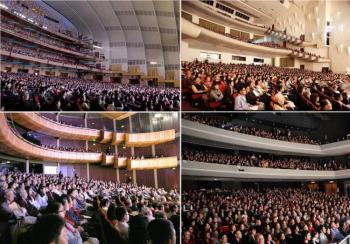 The Failure of the Chinese Regime’s Harassment of Shen Yun

A recent campaign aimed at convincing theater managers not to rent their facilities to Shen Yun Performing Arts while slandering Falun Gong will only increase the popularity of Shen Yun. Such is the paradoxical judgment of the head of a Falun Gong association that hosted Shen Yun performances.

Mr. Sen Yang is the President of the Mid-USA Falun Dafa Association, which helped sponsor Shen Yun’s performances in Chicago this year.

Recently individuals working for the Chinese regime have sent out emails to theaters hosting the Shen Yun shows. The emails claim to be from a Falun Gong practitioner and begin with a “thank you” for the theater’s hosting of the show. The emails then turn to a threatening tone and tell the theater staff to practice and support Falun Gong. If they do not, the emails claim that punishment and bad luck will follow.

Mr. Yang said that the purpose of the emails is to give theater staff a negative impression of Falun Gong practitioners as being irrational and weird, so that the theaters will cancel the Shen Yun shows.

These emails will not have the effect the CCP wants, according to Mr. Yang, because the hosting Falun Dafa Associations and the theaters maintain good relations, mutual trust, and understanding.

Mr. Yang has witnessed firsthand some of the means used by the Chinese regime to try to disrupt the Shen Yun shows. He recounted some of the tricks played in Chicago.

“Initially, agents for the Chinese regime made threatening calls to our hotline. Such actions are illegal in the U.S. In the end they did not succeed,” Mr. Yang said.

“They then tried something else. Pretending to be patrons who had purchased the tickets, they stood in front of the sales office, demanding to return the tickets. This kind of embarrassing behavior did not confuse anyone,” Mr. Yang said.

The real audience members could immediately tell the individuals demanding the refunds were acting irrationally, according to Mr. Yang.

“The funny thing is that such an allegedly powerful regime puts all of its efforts and resources into doing such shameful deeds. It is truly pathetic!” Mr. Yang said.

“What’s even funnier is that after many unsuccessful attempts, the CCP still fails to recognize that every single act of interference has only helped Shen Yun to be more widely known. The interference gives people a chance to compare who is truly promoting art, and who is actually promoting propaganda,” Mr. Yang said.

Mr. Yang pointed out that due to its popularity Shen Yun Performing Arts has rapidly expanded from one to three companies that tour the world performing hundreds of shows annually.

He believes the influence of the shows is unprecedented. “We know from audience feedback that both Chinese and westerners like the shows. The western mainstream society tells us that they appreciate seeing a true, authentic China and Chinese culture. Overseas Chinese say that they gained pride and confidence in their own classical culture after watching the shows,” he said.

Regarding the emails’ attempt to depict Falun Gong practitioners as threatening, Mr. Yang explained a little about how Falun Gong has spread. He pointed out that since Falun Gong was introduced in 1992, a lot of people found it beneficial for their health and uplifting for their morality. They then spread the word to their friends and families. Falun Gong practitioners do the exercises in the parks, and people who find the practice interesting would come to learn.

“The practice is entirely voluntary. Those who wish to stay may stay, and those who want to leave may leave. It is completely up to oneself,” he said.

“There has never been a Falun Gong practitioner who sent out threats to force the others to practice,” Mr. Yang said.