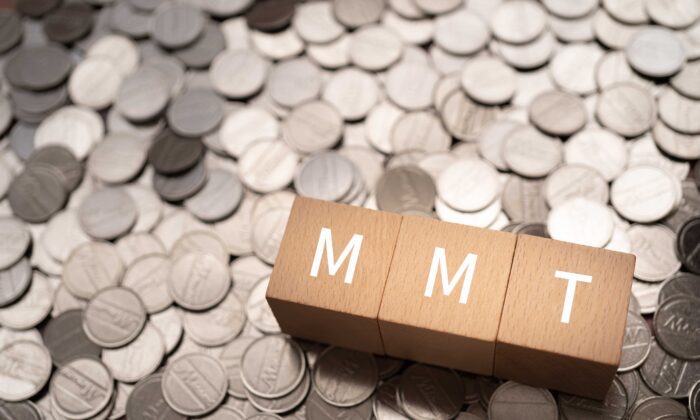 The Failure of MMT Is Now Evident

MMT Policy (Modern Monetary Theory), the grand experiment, was tried following the pandemic-driven shutdown of the economy. It failed miserably.

However, before we get to its failure, we need to review the policy to understand why it failed to work as anticipated. According to Investopedia: “The central idea of MMT is that governments with a fiat currency system under their control can and should print (or create with a few keystrokes in today’s digital age) as much money as they need to spend because they cannot go broke or be insolvent unless a political decision to do so is taken.”

Some say such spending would be fiscally irresponsible, as the debt would balloon and inflation would skyrocket. But according to MMT:

Here is the critical paragraph: “According to MMT, the only limit that the government has when it comes to spending is the availability of real resources, like workers, construction supplies, etc. When government spending is too great with respect to the resources available, inflation can surge if decision-makers are not careful.

“Taxes create an ongoing demand for currency and are a tool to take money out of an economy that is getting overheated, says MMT. This goes against the conventional idea that taxes are primarily meant to provide the government with money to spend to build infrastructure, fund social welfare programs, etc.”

With this base understanding, we can “review the tape” to judge whether MMT, as an economic policy tool, was successful in its implementation.

$5 Trillion Spent And All I Got Was Inflation

At the end of 2019, Federal Debt outstanding was $23.2 trillion. Of course, just three short months later, the government would decide to shut down the economy to battle the COVID-19 outbreak. That decision was the defining moment that implemented MMT with successive rounds of monetary stimulus from direct checks to households to expanded government subsidies. By the end of 2021, Federal Debt swelled to nearly $30 trillion. Such is the most significant increase in government spending in U.S. history.

While the spending of a massive flood of stimulus temporarily boosted economic growth by “pulling forward” future demand, it also created several problems.

The most obvious problem was the impact of dramatically increasing demand on a supply-stricken economy. With the economy “shut down” due to government-mandated restrictions, the flood of stimulus payments led to a demand boost. Given the basic economics of supply versus demand, prices rose. As expected, would be the case, the implementation led to a massive surge of inflation. (Given most Americans’ have fixed healthcare and housing payments for a contractual period, the third measure shows what cost-of-living is for most every month.)

Of course, inflation is not problematic as long as wages keep up.

Wages Fail to Keep Up

However, therein lies the second problem. The economic shutdown forced millions of workers onto unemployment benefits and subsidies. However, with trillions in stimulus, the economy quickly started to recover. As the economy slowly reopened, virus mandates and policies continued to impact supply chains. With the demand imbalance still intact, the demand for workers skyrocketed, leading to a surge in wage pressures to find workers.

The problem, however, is that the surge in inflationary pressures consumed the wage increases seen by workers.

Such is always the problem of injecting money into the economic system.

The repeated argument that more stimulus helps the “poor working class” is erroneous. As we argued in “Biden’s Stimulus Will Cut Poverty By 40% — For One Year,” when you provide “free” money, those that provide the products and services lift prices accordingly. A recent study shows this impact.

“An analysis by the Penn Wharton Budget Model found that low- and middle-income households spent about 7% more in 2021 for the same products they bought in 2020 or 2019, an average of about $3,500,” according to the report.

In other words, when you provide “free capital,” a market-based economy will adjust prices to compensate for the additional demand for products and services. Those primarily living paycheck-to-paycheck see their “disposable incomes” getting “taxed” away. Such leaves their standard of living unchanged.

The following graph shows the average American now has a record deficit requiring more than $4,500 of new debt annually.

Such is why socialism in any form does not elevate the middle class but shrinks it.

While MMT proponents suggest that giving free money will boost economic equality, the opposite is the case, as shown by the net worth of the top 10 percent versus the bottom 50 percent of the population.

While MMT’ers believe that debt doesn’t matter and use Japan as an example, the reality is quite different.

The premise is that Japan has successfully run massive deficits, and the economy has not collapsed yet. Therefore, it is a model that the United States can follow. However, while it is true that Japan’s economy hasn’t collapsed under the weight of its debt; it also hasn’t grown.

Despite that massive surge in Central Bank interventions, it, like the United States, has had little effect on economic prosperity. While stock markets have performed well, economic growth is roughly equal to this century’s beginning. Japan remains plagued by rolling recessions, low inflation, and low-interest rates.

Such is hardly a model that I think most Americans want to follow. However, it is what we have been doing for the last 40-years. The massive increase in debt and deficit spending did not result in a surge in economic prosperity.

GDP growth has slowed below its previous long-term trend before both the financial crisis and the pandemic.

The failure of MMT is apparent.

The idea of MMT sounds excellent in theory. However, debt used for non-productive investments such as social welfare and free college doesn’t produce the economic benefit promised. Instead, the resulting inflation from the influx of “free money” crimps economic growth. Furthermore, inflation “taxes” the bottom 50 percent of income earners the most.

The allure of MMT is strong amid the current economic upheavals. Such is particularly the case since it makes possible every progressive program from unlimited public works, federal jobs, uneconomic green energy schemes, “Medicare for all,” free college, free housing, and a host of others. However, as the Mises Institutes correctly notes:

“The promise of something for nothing will never lose its luster. So MMT should be viewed as a form of political propaganda rather than any real economic or public policy. And like all propaganda, we must fight it with appeals to reality. MMT, where deficits don’t matter, is an unreal place.”

Notably, the “transmission system” of the economy remains broken. Massive increases in monetary interventions are creating inflation but not increasing monetary velocity. As shown, the monetary injections get retained by the wealthy and taxed from the poor through inflation.

According to MMT, politicians should aggressively hike taxes to slow economic activity with inflation running hot. However, higher taxes are not “favorable” heading into a mid-term election cycle, and the economy is already in the process of reverting to its long-term mean as liquidity runs dry.

In the end, while MMT sounded great in theory, its result was inevitable. However, we will continue to pay the price of misguided economic policies that only work in the mathematical formulas generated in “Ivory Towers.” In the “real world,” these theories, while well-intentioned, always yield a damaging result on those it was supposed to help.