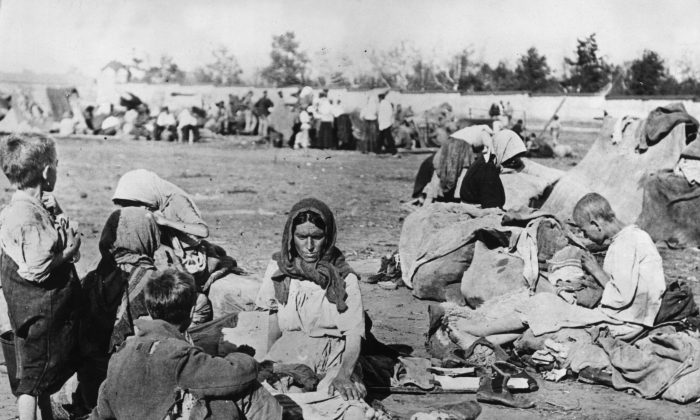 Ragged and barefoot, starving Russian families in the Volga area during the Russian Famine in October 1921. (Topical Press Agency/Getty Images)
The Dead End of Communism

Communists made a disastrous attempt at replacing family with the state

Thinking of “free love” may evoke images of Woodstock rather than early 20th-century Soviet Russia, but it was in fact the early communist regime that undertook perhaps the most ambitious attempt at unleashing human sexuality in history—with predictable results.

As soon as the communists took power in 1917 in Russia, they began to systematically enact policies that followed the doctrines of Karl Marx. Their dream of a materialistic utopia could be attained “only by the forcible overthrow of all existing social conditions,” as Marx had written in the “Communist Manifesto.”

Communists saw commitment to family as an obstacle to people’s devotion to the pursuit of their materialistic utopia.

That included not only confiscating “means of production,” like factories and land, but also disintegrating the institution of the family. Communists saw commitment to family as an obstacle to people’s devotion to the pursuit of their utopia. Instead, people were to live in “free unions,” mating at will.

Masses of Russians, especially urbanites, were sold on the Party line that moral restraint on sexual desire, rooted in family ethics, had no benefits and was instead harmful.

The communists convinced women that cooking for their own families and raising their own children made them “slaves.” By working in state-owned factories, they said, women would have been much more “free.”

What about the children left behind? They were to be separated from their mothers as early as possible—herded into preschools, daycare centers, and later, schools—to be raised by the state as the next generation of “liberated” cogs in the socialist machine.

Based on Russian law and tradition, wives were materially dependent on their husbands, while husbands had an obligation to care and provide for their wives and the whole family. At the time, Russians enjoyed a certain degree of religious freedom, and individual religions were left to govern the rules of marriage. Divorce was limited to resolving situations like infidelity (only with two witnesses), abandonment, or impotence.

Communists scrapped and denounced the laws and traditions wholesale, just as Marx dictated, and put in place the 1918 Family Code. The law was “nothing less than the most progressive family legislation the world had ever seen,” wrote Wendy Goldman, history professor at Carnegie Mellon University and expert on Russian history, in her book “Women, the State and Revolution.”

Religious weddings were no longer considered valid. Instead, registry offices were set up, where people could come and simply register as married. Just as easily, at a request of either partner, they could request a divorce.

“The process of divorce is so simple that there is a loss of neither money nor time. Under the current law, the act of dissolving a marriage can be completed in 15 minutes,” wrote P. Zagarin, a Russian writer on the family, in 1927.

The idea was to “liberate” women from marriage and thus the family. But instead, the regime gave men the perfect excuse to abandon their families. Many men suddenly found they had “nothing in common” with their wives, while, shortly after a divorce, discovering striking commonalities with younger, unburdened women.

“The broad mass of people do not regard registration of marriage as the basis of marital relations. De facto voluntary unions are becoming ever more widespread,” wrote A. Stel’makhovich, chairman of the Moscow provincial court, in 1926.

If extracting alimony seems hard in the 21st century, it was more so in 1920s Russia. Courts became overburdened with child support cases, and men found many ways to avoid payments, such as by changing jobs or moving.

Even worse, after a decade of war, civil war, and the Red Terror, men were in short supply, making it much easier for them to remarry.

Meanwhile, the promise that the government would take care of children fell devastatingly short. In 1926–27, preschools served only about 150,000 children out of a population of 10 million.

At the time, Vera Lebedeva, the head of the Department for the Protection of Maternity and Infancy, said: “The weakness of the marital tie and divorce create masses of single women who carry the burden of child care alone. Imagine yourself such a woman, without support from your husband, with a child on your hands, laid off due to a reduction in staff, and thrown out of the dormitory … with no possibility to continue supporting yourself.”

Oftentimes, divorced women would end up on the streets.

“The contrast between the socialist ideal of free union and the conditions of the time was nowhere so starkly depicted as in the spectacle of women selling themselves on the streets,” Goldman wrote. “It made a mockery of the idea that women were free, independent individuals who could enter a union on the basis of personal choice.”

The concept of free unions failed even more miserably in the countryside. Divorce meant dividing the already small farming plots between the exes, who may have remarried and divorced again and again, quickly leaving everybody with land too scattered to depend on for survival. On the other hand, if policies kept the farms whole, women were left with next to nothing after a divorce.

The Reality of Soviet Art

Some could have blamed the failure of “free love” on a lack of contraception, but natality was already low, not to mention the massive number of war and Red Terror casualties. With a demographic disaster looming, Russia actually needed more children, not fewer.

Some could have argued the Soviets just needed more preschools and daycare centers. But that would have reduced the burdens faced by single-mother families by only a bit—from devastating to very heavy—as many of today’s single mothers can attest.

Some could have said women just needed more jobs, but while that could have lessened their misery, it still wouldn’t have have solved the fundamental problem. “Even if a woman worked, divorce signified a substantial drop in her standard of living,” Goldman wrote.

To reverse a society-wide disaster, by 1936 the Soviet Union abandoned the “free love” ideology and returned to pro-family policies, outlawing abortion, requiring substantial fees for a divorce, imposing higher penalties for abandoning a family, and encouraging women to have more children.

“The idea that the state would assume the functions of the family was abandoned,” Goldman wrote.