The Eye Floater Phenomenon: Between Science and Spirituality 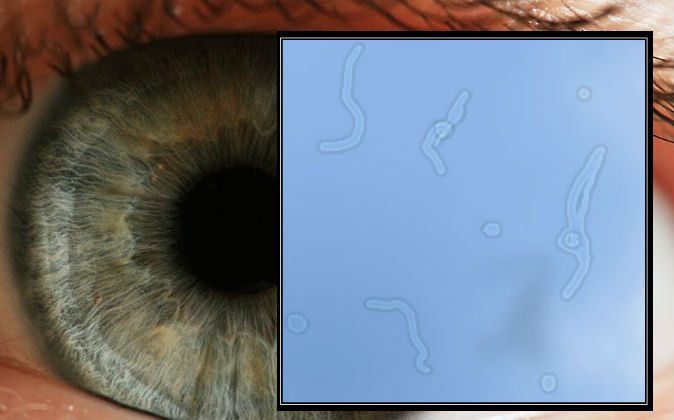 In the mid-1990s, I met a man named Nestor living in the solitude of the hilly Emmental region of Switzerland. Nestor has a unique and provocative claim: that he has focused for years on a constellation of huge, shining spheres and strings which have formed in his field of vision.

He interprets this phenomenon as a subtle structure formed by his consciousness. He believes consciousness creates our material world. Nestor, who calls himself a seer, ascribes this subjective visual perception to his long lasting efforts to develop his consciousness.

In the history of religion and art, a multitude of cases are known in which spiritually committed individuals report abstract or figurative subjective visual phenomena they experienced–often while in ritually induced altered states of consciousness (Tausin, 2010b; Müller-Ebeling, 1993).

Nestor’s case, though, seems to be exceptional in two regards. First, Nestor is aware of, and considers, the ophthalmological explanation of his visual experience, known as “eye floaters.” And second, floaters are a common and wide spread phenomenon, experienced by a lot of people who do not claim to live a particularly religious or spiritual life.

What Are Those Tiny Translucent Blobs, or Floaters, You Seem to See in the Air?

In the course of my time with Nestor, I tried to understand the phenomenon from an ophthalmological point of view, as well as from my own observations. My objective was to comprehend Nestor’s claims about the spiritual relevance of this phenomenon (Tausin, 2009a).

I considered the following questions:
1) What are floaters?
2) What makes Nestor think of floaters as a spiritual phenomenon?
3) Are there any equivalents in the history of science and religion to understanding floaters in terms of spiritually relevant visionary experiences?
4) Does Nestor’s claim require a new ophthalmological understanding of eye floaters, and how so?
5) Is it reasonable to think of floaters as a spiritual phenomenon, and to what extent?

“Eye floaters” (mouches volantes or muscae volitantes in French and German ophthalmology) is a collective term used in ophthalmology for all possible opacities in the vitreous. Many of them can be traced to physiological disorders like retina detachment, diabetic vitreoretinophaty, as well as Marfan’s, Ehlers-Danlos, and Stickler’s syndromes.

The floaters at issue, though–which are also the most experienced floater type–are considered as “idiopathic,” i.e. without pathological cause. They are seen as mobile and scattered semi-transparent dots and strands in the visual field, best perceived in bright light conditions (fig. 1).

Is it a Floater, or a Medical Emergency?

These dots and strands float according to the eye movements, which makes them hard to focus on. The explanations vary between remaining embryonic stem cells, cell debris between the retina and the vitreous, and hyaluronic vitreous fibrills clumped together due to vitreous liquefaction and posterior vitreous detachment (Trick, 2007; Sendrowski/Bronstein, 2010).

Nestor and the Inner Sense

Nestor’s statements about eye floaters differ significantly from the ophthalmologic explanation: for Nestor, we see these spheres and strings not with our eyes but with an “inner sense” or the “third eye.” He characterizes this inner sense as an eye that gradually opens up through the withdrawal of the external senses as experienced in concentration exercises.

Therefore, he explains the initial symptoms of floaters as an indication of the third eye beginning to open. The fact that many people see floaters in our contemporary Western societies means, according to Nestor, that many people already have a connection to their inner sense, even if they don’t work with it consciously.

Any activity that increases the attentiveness of a human being is understood by Nestor as “spiritual” in nature.

With such statements, Nestor ascribes an extraordinary meaning to the visual phenomena called “floaters”: they are a spiritual phenomenon, and thus a directly perceptible starting point for our own spiritual development, for the realization of our “true selves.”

But what made Nestor utter such claims? According to him, these propositions are deduced from his own seeing. It is important to understand that his description of the spheres and strings differs from the one of most others. He doesn’t see scattered small dots and strings that drift away permanently, but large, bright spheres and tubes which he is able to hold in suspension and, therefore, to see clearly.

To be more precise, Nestor pleads to have observed the “lighting up” and “zooming in” of floaters; former transparent tiny dots and strands are now seen as large spheres and tubes full of light (fig. 2).

In the past 150 years, modern science has provided concepts to understand the physiological aspects of at least some of the extraordinary subjective visual phenomena.

For example, many of the abstract geometric figures in indigenous art or in shamans’ or yogis’ ritually induced visions can be understood as “entoptic phenomena” (Thurston, 1997). Entoptic phenomena are colored or bright moving geometric shapes and patterns in the visual field, caused by certain conditions of the human visual nervous system.

An example is the archaeological controversy about a neuropsychological interpretation of the rock and cave art of the later Paleolithic era (about 40,000 to 10,000 B.C.). Ever since the discovery of the European Paleolithic caves, archaeologists have been wondering about the importance and meaning of such geometric representations, accompanying the vivid depictions of animals.

In 1988, David Lewis-Williams and Thomas Dowson brought forward the original thesis that Paleolithic art is inspired by entoptic phenomena (or, more specifically, “form constants”), seen and depicted by shamans or spiritual men and women during altered states of consciousness.

Towards a New Ophthalmological Interpretation of Eye Floaters

Thus, while scholars acknowledge that the visual experience of so-called entoptic phenomena can have a cultural or spiritual relevance to their observers under certain conditions, eye floaters are tacitly excluded from this line of thinking.

In my opinion, there are two main reasons for this. First, eye floaters are an ordinary phenomenon, perceived by a lot of people in everyday consciousness. And second, floaters are explained as idiopathic opacities in the vitreous, i.e. “entophthalmic” rather than “entoptic” phenomena–eye rubbish, so to speak.

Both reasons seem to mock the idea that they could have a positive, spiritual meaning. However, I would like to reconsider these points drawing on Nestor’s and my own visual experience with floaters.

While eye floaters do show up in ordinary consciousness states, they also constantly look different–which is, in my opinion, pointing to the fact that there is no “ordinary,” but a constantly changing consciousness. Anybody taking the time to carefully observe her or his floaters, recognizes that they constantly change size, brightness, and velocity.

A closer inspection reveals that this alteration depends on a number of factors, some of which are outer conditions like the brightness and color of the background against which floaters are viewed. Others may be called “inner” or “psychic” conditions, like attention span, mood, degree of concentration, stress and the like.

It’s not by accident that vision improvement schools propose to influence floaters through relaxation practices–their goal, however, is to get rid of them (Tausin, 2009b).

As I have demonstrated above, Nestor is making the same claim, differing only in the degree of psychophysical abilities like concentration, calmness, “energy metabolism,” et cetera. Thus, it is perfectly conceivable that a human’s perception of floaters could change to the extent explained above, revealing certain features that are experienced as “meaningful” or “spiritual.”

In my opinion, there is no reason to accept today’s ophthalmological explanation, since it fails to explain some of the more subtle floater characteristics that can be revealed through careful observation (Tausin, 2009d).

For example, the morphological regularity of eye floaters. Floater spheres are perfectly circular and concentric and show a core and a surround. Two contrasting types of spheres can be distinguished: one has a bright rim and dark core, and the other has a dark rim and bright core. It is questionable if this morphological regularity really represents hyaluronic fibrills or cells clumped together.

Floaters seem to change size depending on a person’s level of concentration.

They also seem to change size. For simplicity, I distinguish between a “relaxed” (big) state and a “concentrated” (small) state. Generally, it seems as if most eye floaters were, at first, bigger, nearer, and more transparent. With increasing time of observation, however, they change into a concentrated state. After abandoning concentration the spheres and strands change into the state of relaxation again; a quick glance to somewhere else may suffice.

Eye debris, in contrast, is not supposed to change size in that regular manner. Nor is it supposed to light up.

Also, the sinking of the dots and strands is worth considering: Eye floaters react sensitive to eye movements. It seems as if they would always move in the direction in which we look. But as soon as we keep the eyes still and observe the floaters from the angle of vision, we recognize that they sink–sometimes faster, sometimes slower. This sinking may be taken as evidence for the debris nature of floaters, debris floating in the vitreous and sinking due to the force of gravity. However, this argument is disqualified if we recall that the image of the visual world on the retina is inverted–which means that any sinking down of floaters as seen by the observer would require the corresponding particles in the vitreous to ascend.

In this case, too, careful observation reveals that the sinking rather seems to be related to the consciousness state. It tends to slow down in states in which floaters are seen big and shiny.

All of this suggests that the type of floaters at discussion should be reconsidered by ophthalmology or physiology. With the concepts at hand, and based on my subjective experiences and experiments with floaters, I strongly suspect them to be an entoptic rather than entophthalmic phenomenon.

Yet, does this also indicate a “spiritual” nature of floaters? As is the case with entoptics, it depends on the definition of “spirituality.” The case of Nestor demonstrated that floaters, too, can have an extraordinary meaning for human beings.

The name Floco Tausin is a pseudonym. The author received a Ph.D. in the faculty of the humanities at the University of Bern, Switzerland. In theory and practice he is engaged in the research of subjective visual phenomena in connection with altered states of consciousness and the development of consciousness. In 2009, he published the mystical story “Mouches Volantes” about the spiritual dimension of eye floaters.

Reichel-Dolmatoff, Gerardo. (1975). The Shaman and the Jaguar. A Study of Narcotic Drugs Among the Indians of Colombia. Philadelphia: Temple University Press