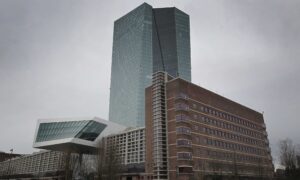 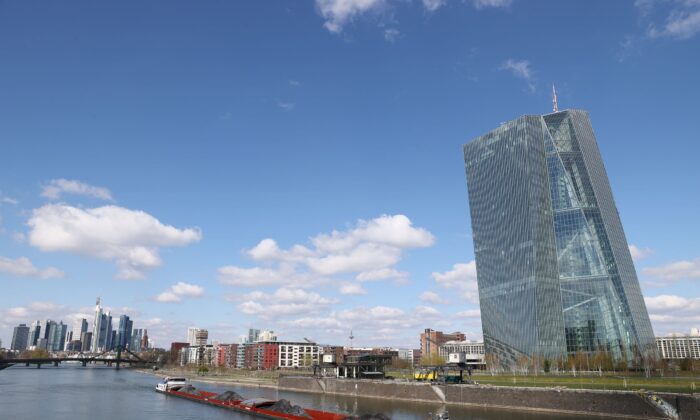 The skyline with its banking district and the European Central Bank (ECB) are seen, as the spread of the COVID-19 continues, in Frankfurt, Germany, on March 31, 2020. (Kai Pfaffenbach/Reuters)
Viewpoints

The Eurozone Is Going Down the Japan Route

The European Central Bank (ECB) announced a tapering of the repurchase program on Sept. 9. One would imagine that this is a sensible idea given the recent rise in inflation in the eurozone to the highest level in a decade and the allegedly strong recovery of the economy. However, there’s a big problem.

The announcement is not really tapering, but simply adjusting to a lower net supply of bonds from sovereign issuers. In fact, considering the pace announced by the central bank, the ECB will continue to purchase 100 percent of all net issuances from sovereigns.

There are several problems in this strategy. The first one is that the ECB is unwillingly acknowledging that there’s no real secondary market demand for eurozone countries’ sovereign debt at these yields. One would have to think of twice or three times the current yield for investors to accept many eurozone bonds if the ECB does not repurchase them. This is obviously a dangerous bubble.

The second problem is that the ECB acknowledges that monetary policy has gone from being a tool to help implement structural reforms to a tool to avoid them. Even with the strong GDP bounce that the ECB predicts, few governments are willing to reduce spending and curb deficits in a meaningful way. The ECB estimates show that after the massive deficit spending of 2020, eurozone government spending will rise again by 3.4 percent in 2021 only to fall modestly by 1.2 percent in 2022. This means that eurozone government spending will consolidate the COVID-19 pandemic increase with little improvement in the fiscal position of most countries. Indeed, countries such as Spain and Italy have increased the structural deficit.

The third problem is that negative rates and high liquidity injections combined with elevated government spending have generated no real multiplier effect in the eurozone. We must remember that the main economies were in stagnation already in the fourth quarter of 2019, before the pandemic and despite large stimulus plans like the Juncker Plan, which mobilized hundreds of billions of euros in investments.

The fourth challenge for the ECB is that it acknowledges being trapped by its own policy, it cannot stop it and normalize because governments and markets would suffer, and it cannot keep the current pace because inflation is putting even more pressure on growth.

The final challenge for the eurozone and the ECB is that they continue to implement policies that ignore demographics and structural burdens to growth. The eurozone has an aging population, and monetary and fiscal policies seem to ignore the evidence of changing consumption patterns when citizens reach a certain age or retire. If we add to demographics a taxation system that increasingly hurts middle classes, businesses, and investment, we face an economy that seems to be following all the wrong policies that Japan implemented at the beginning of the 1990s.

As Japan did, the eurozone is betting all on government spending, chains of stimulus packages driven by political directions, and massive debt monetization. However, the eurozone does not have the disciplined labor force that Japan has nor the elevated levels of corporate and household savings that allow the country to continue in stagnation for decades.

Countries such as Italy, Spain, Portugal, or Greece cannot survive stagnation due to elevated levels of unemployment and the small size of the business fabric. Therefore, the ECB seems to ignore the risks of perpetuating the perverse incentives to bloat government spending and debt. All messages concerning structural reforms and real growth initiatives have disappeared in favor of directed stimulus plans that never deliver.

Our duty as economists is to warn of the more-than-likely scenario of poor recovery, low productivity, and high debt that the eurozone faces. Fiscal multipliers have been negative for too long for us to ignore the negative crowding-out effect of high government spending and the erosion of competitiveness that the economy faces.