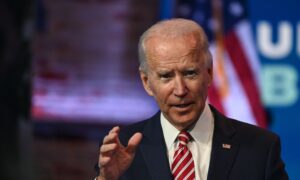 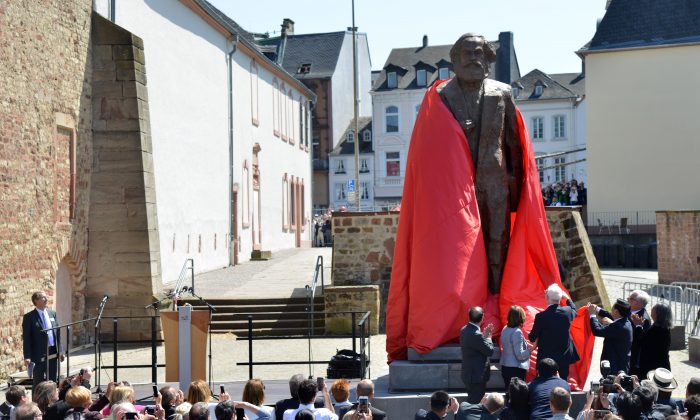 Visitors look on as a statue of German communist thinker Karl Marx is unveiled on May 5, 2018 in his native city of Trier, in southwestern Germany. (HARALD TITTEL/AFP/Getty Images)
Viewpoints

The European Project and Karl Marx

Is the European Union losing its moral compass?

European Commission President Jean-Claude Juncker showed up recently in Trier, the birthplace of Karl Marx, to pay tribute to his memory. This was followed by a series of exhibitions, including the unveiling of a gigantic statue of Marx, sponsored by the Chinese regime, to commemorate the 200th anniversary of the creator of modern communism.

To come from a country that experienced Marxism in practice—as I do, being from Slovakia—is to shudder over such fawning. What does it mean, or portend, when Juncker honors an architect of collectivist tyranny and oppression at a time when many democracies are struggling?

It means we should study and honor history, of course. We know from history that systems based on ideologies that pit one group of citizens against another—the very essence of Marxist class warfare—degenerate until they turn against humanity itself.

Juncker’s argument that “[Marx] stands for things which he is not responsible for and which he didn’t cause” is mostly inaccurate. Knowledge of and experience with Marxism tell us the exact opposite. As for the practice, we do not have a single example of Marxist theory being applied with positive results. Would Junker and others have us believe that, if only we tried harder, we could one day “get Marxism right” in our politics?

Many have laid down their lives in the struggle against communism. They rejected Marxism both in theory and practice and grasped the inevitable consequences brought by those who naively dreamed about good intentions. For this reason alone, Juncker’s celebration of Marx and his message at Trier dishonor another part of history: the lives and deaths of those martyrs who fought for liberty and human dignity.

For those of us who consider ourselves persons of faith, Juncker’s affection for Marx and Marxism is especially troubling.

Perhaps the most elaborated upon account of why Marxism inevitably enslaves the human person was provided by the Catholic Church, the church of which Juncker claims to be a member. In its encyclicals, the Church recognizes “the misery and wretchedness pressing so unjustly on the majority of the working class” and offers an alternative to the enslaving solution put forward by Marx, first in Leo XIII’s encyclical Rerum Novarum (1891), which is considered a foundational text of modern Catholic social teaching. Many of the positions on Marx’s dogmas were supplemented by later encyclicals.

The timing and context are also alarming. To laud Marx when the West struggles both with people losing their faith and their trust that liberal democracy can deliver better lives for all is foolish.

Democracy is facing “competition” from populist demagoguery and is threatened by growing disinformation and propaganda campaigns. The Kremlin is one of the greatest resources for these campaigns.

Putin’s regime is actively trying to revive the power of Russia by blurring the differences between communist regimes and liberal democracies while presenting the Soviet Union in a positive light.

Russian organizations like Memorial, which are trying to pay tribute to the hundreds of millions of victims of the Soviet regime and thus support the pro-democratic direction Russia initially took in the 1990s, are persecuted, while statues to Stalin are erected across the country.

The attempts to normalize the memory of communism are exported to the EU with the tacit support of actors like the Slovak governing party Smer-SD; the Belgian Prince Laurent, who regularly attends events celebrating the Chinese, Cuban, or other regimes; many Western universities, which receive generous “sponsorship” from the Chinese regime; and now Juncker, with his tribute to Marx.

From one side, Europeans are being beleaguered by statues of Marx, which are sponsored by one of the most brutal current regimes: the party-state in China, which kills its own citizens on an industrial scale (see, for example, EndTransplantAbuse.org). From the other side, statues of Stalin are sponsored by Russia, which is waging a hybrid war and threatening the very integrity of the EU.

Last year, we observed the hundredth anniversary of the Bolshevik revolution. On Nov. 7, 2017, the European House of History, together with Juncker’s home political party, the European People’s Party (EPP), organized an event to shed light on the historical incident that sparked one of the greatest atrocities in history and to pay tribute to the victims of Soviet communism.

The EPP embraces most of the parties of former dissidents and opposition leaders from the post-communist European states. In this regard, the party has an important role to play in safeguarding the memories of the horrors of communism.

Voices that defend Marxist ideology with the excuse that the atrocities were not an inevitable consequence of the theory of historical materialism are dangerous for currently contested democracies. The link between the atrocities and Marxist theory is clear. To put blinders on is irresponsible and dangerous.

Perhaps Juncker and the European Commission need a field trip. They might start with a visit to the labor camps and political prisons across China, whose party-state seems eager to encourage naïveté and willful blindness.

Miriam Lexmann is a former permanent representative of the Slovak Parliament to the EU, who left diplomacy when the current post-communist government in Slovakia took over. She works in international democracy support and serves as a member of the advisory board of the University of Kent’s COMPASS.