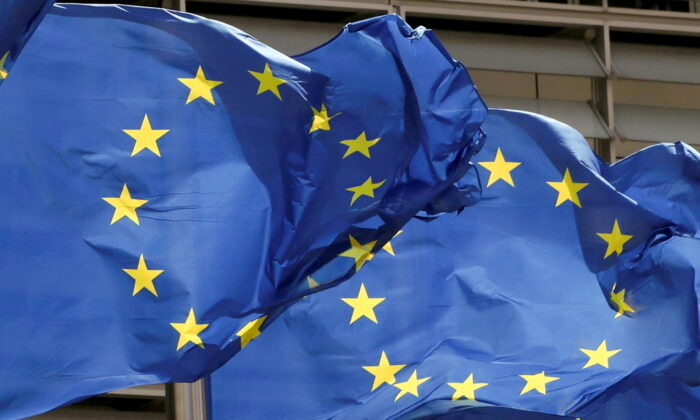 European Union flags flutter outside the EU Commission headquarters in Brussels, Belgium, on May 5, 2021. (Yves Herman/Reuters)
Thinking About China

The EU Is Bitterly Divided: China Is Exploiting This Fact

A house divided against itself, in the words of Abraham Lincoln, cannot stand. Let’s apply Lincoln’s warning to the European Union. Its member states are very much divided.

If the EU is a family, then it’s a highly dysfunctional one. Because of this dysfunctionality, numerous problems exist. Perhaps the biggest problem of all involves the Chinese Communist Party (CCP), and its growing influence over EU member states. Brussels, not surprisingly, appears to be no match for Beijing.

What is the purpose of the EU? I ask this question in all seriousness. According to its official website, the goals of the EU include the promotion of peace, protecting the values and the well-being of its citizens, as well as the protection of “freedom, security and justice without internal borders.” Laudable goals, no doubt.

However, over the years, the EU has proven itself to be highly ineffective. According to a recent report published by the Carnegie Endowment for International Peace, the EU’s shortcomings, including the inability of its members to agree on the most basic of issues, has left Europe exposed.

As other countries look to end economic ties with China, Greece is looking to strengthen them.

In the words of Greek Ambassador Spiros Lambridis: “We strategically opt for the best possibilities for our own country, again always within our obligation with the main organizations, which is the EU and NATO. Thus, so far, we have joined the Belt and Road initiative in a very concrete project and in a very concrete term, not looking at that as a strategic relationship with another partner, but certainly we are not going to abandon it, just because others do.”

Politicians are known for speaking in riddles, but one needn’t possess more than a few neurons to interpret the ambassador’s words: “Other EU members can abandon China, but Greece will not.”

As AP News has reported, Greece, still reeling from a financial crisis that erupted over a decade ago, has desperately attempted to attract international investments, especially from China. As AP noted, the Chinese company “Cosco Shipping now owns 67% of Greece’s Piraeus Port Authority, one of the largest ports in Europe, after Greek lawmakers ratified the sale of a 16% stake in the company on top of the 51% Cosco already held.”

China’s foreign minister, according to AP, described Piraeus “as an emblematic project of the Belt and Road Initiative and a model for mutually beneficial cooperation.” The Greeks called for investment. China answered.

Another country eager to cooperate with the CCP is Hungary. In a recent video message, Prime Minister Viktor Orban discussed the importance of cooperation between Budapest and Beijing. COVID-19, according to Orban, “has shown how interdependent we are.” Indeed. Ever since Orban took office back in 2010, he has done all in his power to attract Chinese investment. A decade on, and absolutely nothing has changed.

In Bulgaria, Chinese investments are also flooding in. As a member country of the EU since 2007, Bulgaria continues to welcome Chinese investments with open arms. Two years ago, the Bulgarian government invited China National Nuclear Corporation to bid for the development of the Belene Nuclear Power Plant, located less than 5 miles from the Romanian border.

Interestingly, as Romanian news agency ACTMedia reported back in February, the Romanian government no longer awards “infrastructure contracts to companies coming from countries that do not have a bilateral trade agreement with the EU.” That includes China. Now Chinese companies are forbidden from investing in the likes of nuclear power and telecoms.

Sadly, throughout the rest of Europe, similar feats of bravery are in short supply. Countries with aspirations of joining the EU are also compromised. Take Georgia, for example, a country that will formally apply for EU membership in 2024. A country of strategic significance, Georgia sits at the intersection of Europe and Asia.

In recent times, Beijing has started to form close ties with Tbilisi, a fact that should concern other countries in the region, and especially those in Brussels. As the researcher Paul Goble noted back in October, “Georgia promises to give Beijing an important bridge to Europe as well as the means to increase its geopolitical influence in the Caucasus more generally.”

Goble warned that “Beijing’s quiet approach in Georgia may gradually undermine this pivotal South Caucasus state’s relationship with the West.” Likewise, Beijing’s “quiet approach” in Europe is undermining the EU, which consists of 27 countries with disparate goals and ideologies.