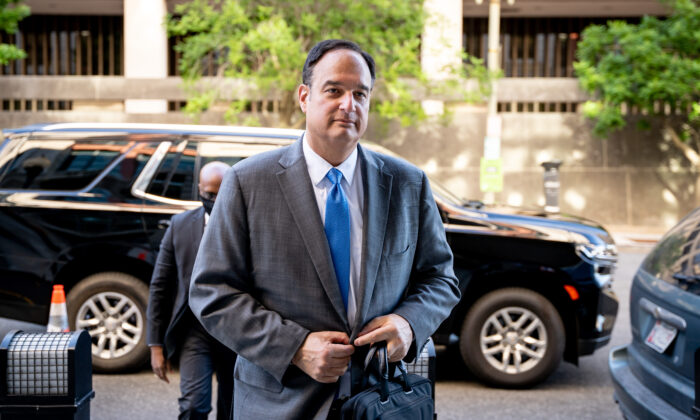 The Establishment Wins in Sussmann Case—And No One Is Surprised

The acquittal of Michael Sussmann is undoubtedly a travesty for American justice. It proves not only that the country’s intelligence agencies have been thoroughly politicized, but also—and perhaps worse—that the citizens of this nation are rapidly losing the ability for legal recourse to hold our institutions accountable.

So much for “consent of the governed.”

The Durham indictment is viewed as a partial success by some, as it was able to leave little doubt that the Clinton campaign was responsible for both inventing and releasing some of the earliest rumors of the Trump-Russia lie. It also proved that presidential candidate Hillary Clinton personally approved the release of the Alfa Bank “evidence,” positing that the Trump campaign had a provable link to the Kremlin.

Well, that’s good. Regardless of Sussmann’s acquittal, this is further vindication for those who have cried foul play in the Trump-Russia witch-hunt from the beginning. More and more people will be exposed to the truth, and this will help to illuminate further the malicious hand of political corruption lurking in the Washington establishment. After all, sunlight is the best medicine.

I hate to be the bearer of bad news, but what this verdict reveals to us about the worrying state of our “republic” far outweighs any “see, we told you so” moral victory.

As a matter of fact, that is the crux of what is so alarming about this entire case—further damning evidence that the Trump-Russia hoax was undoubtedly a political operation does not worry the Washington establishmentarians or our partisan intelligence agencies one bit.

The most revealing, disturbing, and generally worrying facet of the entire Sussmann case is that, for those of us who have been paying attention to the trends in American politics as of late, we knew that nothing was going to come of this case. We (rightly) scoffed at the notion that the justice system was going to hold someone like a Clinton campaign lawyer to account for their political misdeeds.

The acquittal came as no surprise. Why would one expect anything else of a political system that has come to treat those who refuse to accept the Washington status quo like political dissidents?

Meanwhile, the FBI witnesses used their time on the stand to express disgust with Congress’s treatment of Sussmann. Margot Cleveland at the Federalist fully recounted the contempt that the current and former federal agents displayed at the notion of a “hoax.” It was the congressional investigation into the legitimacy of the Trump-Russia narrative that bothered them, not the fact that they were lied to by a political operative working on behalf of an electoral candidate.

Again, this should not surprise anyone. Baker, now retired from the FBI, is a regular guest and general darling of leftist corporate media outlets for his outspoken anti-Trump views. He’s just one representative of the increasingly partisan federal intelligence agencies.

To quote from Cleveland’s article: “And there was little trust left after the FBI launched Crossfire Hurricane on the most ridiculous of pretexts; after text messages revealed Lisa Page and Peter Strzok’s anti-Trump sentiments drove the Crossfire Hurricane team members; after the FBI and DOJ obtained four court surveillance orders based on fraud and then illegally surveilled Carter Page; after fired FBI Director James Comey leaked to the press, via an attorney friend, memos he had written following meetings with then-President Trump, to prompt the appointment of a different special counsel; and after FBI agent William Barnett told investigators that he believed Special Counsel Robert Mueller’s office used the prosecution of Gen. Michael Flynn ‘to get Trump.’”

Why stop at the Russia collusion hoax, though? Former CIA Directors Mike Hayden and Leon Panetta, as well as former Directors of National Intelligence James Clapper and John Brennan, were some of only the most prominent 51 signers of a letter claiming the Hunter Biden laptop story had “all the earmarks of Russian disinformation.” They released the letter to the media on Oct. 19, mere days before the November 2020 election.

It’s the same story as the Russia collusion hoax. Its proponents now know that beyond a reasonable doubt the story is false, and likely knew it earlier. Regardless, left-leaning corporate media outlets will be making their victory laps with the Sussmann acquittal, as if their viewpoints and four years of fearmongering are actually the issues that have been vindicated. Those who use these outlets as their primary source of information will have no clue as to the revelations of foul play revealed in the Durham probe.

Meanwhile, election fraud in 2020 continues to be exposed, seemingly on an exponential rate following the release of the “2000 Mules” documentary.

For those who claim to care so deeply for the health of democracy, the fact that a U.S. presidential election is proving to be extremely insecure and seriously influenced by voting irregularities would seem to be an important topic of concern. As well as the obvious lies surrounding the collusion allegations revealed through the Sussmann case. As well as the notion that a group of the country’s most powerful unelected bureaucrats undertook a political operation that helped to successfully shift the outcome of arguably the nation’s most consequential election.

Beyond directly influencing the American electorate at the polls, these actions have also done more to sow discord, incite anger, propagate mistrust, and generally undermine social cohesion among the U.S. population than perhaps any other action of the 21st century.

One is forced to wonder: are the individuals responsible insulated from this reality as a result of living and interacting in ideologically uniform echo chambers; or, do they rather accept it as the unfortunate but necessary collateral damage of maintaining responsible stewardship over the country’s institutions of power (as defined by their leadership)?

Regardless, for the rest of the country, the only logical conclusion is that there are certain royal families in American politics that have immunity to the rules that the rest of us are forced to play by, and the outcome is always the same: they win.

“Threats to democracy” will be limited to the protesting crowds at the U.S. Capitol on Jan. 6. One fact likely lost on many of our political leaders is that the latter were not just upset about election irregularities in 2020; they were expressing anger at four years of constant attacks from every societal angle on the sitting president of the United States, as well as themselves and their beliefs. The Justice Department has secured convictions of Jan. 6 defendants in every single case that have gone to trial (five out of five)—the most recent on May 27, carrying a statutory maximum penalty of 20 years in prison.

Meanwhile, Sussmann walks free. It’s possible to measure the contribution of his politically motivated actions while on the Clinton payroll to this nation’s discontent, or its deteriorating trust in democracy. I wouldn’t hold my breath for future convictions of others involved in propagating the collusion hoax.